Home Archives Profile Subscribe
From on the Hook in Grenada to on the Hard in Trinidad, Part One*
Living On The Hard*

From on the Hook in Grenada to on the Hard in Trinidad, Part Two*

another projects, and more friends.

In the last installment, we focused mostly on the first 36 hours of this fun-filled two days at sea and on the hard. I bet you can’t wait to see what happens next. 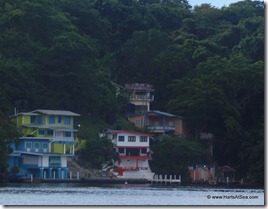 These colorful homes are on the island in Chaguaramas Bay. This looks ideal, but the bay itself is very industrial, polluted, and rife with floating trash. This is definitely a working harbor, most marinas have a small number of docks and all except one are boatyards with some slips, not marinas as we know them. I wouldn’t stay here except to have work done, but others enjoy it for the season.

While we were hovering near the custom dock on Thursday morning, I tuned the VHF to listen to the local cruisers’ net. Like all such nets, they offer the opportunity to announce your arrival to the harbor. I, of course, announced that, “ We are Barb and Stew aboard La Luna from the Great State of Maine and have just arrived.” Consequently still more of our cruising friends called to welcome us. In addition, as we were tied to the slipway waiting to be hauled, I heard someone calling “Hello, La Luna.” I popped up on deck to meet Maureen, who couldn’t wait to greet someone else from the Great State of Maine. Maureen and Bruce are from Boothbay, sail Memories, a Whitby 42, and are currently hauled out in a nearby boatyard. We agreed to get together.

I checked the boat – but not that pesky head port, dammit – gathered the camera, my hat, and Kindle and prepared to be off the boat until she was placed in her on-the-hard spot. Just as I jumped onto the dock, I heard, “Hello, Bar-bar-a!” and turned to see Nina from Brazil , who sails with Michael from Germany. We did the two-cheek kiss thing that’s all the rage with European and South American sailors … and folks in the Caribbean … and pretty much everyone who didn’t grow up in the Great State of Maine. I’m getting quite good at it. Anyway, we did that, and promised to get together. 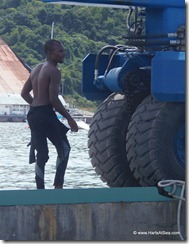 Marcel and the boat lifting crew got to work. EW had asked me to open the laptop to show the lifting points for our boat so that the shaft doesn’t get bent, but we didn’t need our pictorial display because the yards in Trini each have a diver who jackknifes brilliantly into the icky water in Chaguaramas Harbor and guides the slings to their appropriate spots.

That is a brave man. This is a filthy harbor. He said he was, “just doing my job.” I think he’s wonderful. The boat was lifted, I took oodles of photos of the process and of that guy pressure washing the bottom. ( You remember that guy with the pressure washer, right? ) We met Greg, the Yard Manager and discussed the work and their operation. We found out where the facilities were, EW went to get us some water and ran into four more cruising friends. La Luna was expertly and safely moved to her spot by Michael and his crew. Michael apologized for our location but I told him I knew we were going to be in the outer reaches of the yard since there was going to be sanding happening.

EW and I walked to a nearby restaurant for a late lunch and discussed the air conditioning thing, coming to agreement. We are getting one. Period. When we returned to Peake we found Maureen looking for us. Here’s what is interesting about Trinidad. So many people are hauled out here that they have a social life. Maureen invited us to a pot luck for on-the-hard-live-aboards. My first thought was “Cool.” But then I realized that I still had to clean up all those ocean bits in the head, and had no supplies on board for a  pot-luck. Before I could say anything, Maureen said, “If you have something to grill, I’ll make a potluck item that you can share.” Now that is a thoughtful offer.

We worked like fiends doing some Day/Morning/Minutes Before Hauling Out tasks, coupled with After Hauling Out tasks, and one Boy That Was Dumb task. Once the head was clean – again -- I marinated two pork chops, assembled drinks and plates and utensils, and we walked to the yard next door to meet new friends and get hugs from a bunch of sailors we knew in Grenada – and Antigua – and St. Thomas. We dined with Bruce and Maureen and found out that, in addition to having many Mainah friends in common, we also share friendships with a number of cruising buddies. They know John and Dora on Windrifter, Jeff and Sandy on  Magic Inspiration, and Joanne and Bill on Ultra. We spent time name dropping and time getting to know them and some of the other cruisers who joined us. And we exchanged a bunch of hugs with Jackie and Chris from High Heeled, with a promise to get together for a euchre game soon.

So, how’s Trini? Well, the harbor is almost as dirty as folks told us it would be. The local people we’ve met here near and in the marinas are as friendly as folks are in Grenada. The crew seems to be very knowledgeable and patient. It’s damn hot. So far, not many mosquitos. The ladder they give us to use, is big and strong, and has a bit of flex that takes some getting used to. The cruisers have tours, domino games, shopping trips with a local bus driver, and a strong network for fun and information. Good prepared food is plentiful with much variety and cheap – that’s a good thing, remember I can’t use the galley sink. Can you say washing dishes in a bucket? Speaking of which, can you say getting off the boat, going down the ladder and walking about a hundred yards to the facilities. Oh! Don’t forget the key!  That’s life on the hard. We’ve been told to expect the work to take three weeks. That always means more. I’ve never lived aboard on the hard for more than 12 days.

This should be fun. Either way, I’ll be sure to let you know.