Home Archives Profile Subscribe
Grenada Spam
From on the Hook in Grenada to on the Hard in Trinidad, Part One*

That seems to be the theme this week. Our friend Diana flew back to Canada to get ready for her daughter’s wedding. Her partner, Ross, is still aboard their catamaran, enjoying this week with Tim, who is visiting from Florida. Many cruisers leave Grenada for some part of the hurricane season. Sometimes the whole crew will leave for a few weeks, but most often the first mates fly out to visit adult kids, parents, grandkids and friends. It’s sexist, but often those cruisers left behind will feed the lone captain at least once while they are living as temporary bachelors. In this case, we enjoy Tim as much as Ross, and Tim is an excellent fisherman – so we’ve spent a lot of time with the guys from One White Tree.

Two phrases have been uttered often: “What happens at Hog Island stays at Hog Island” and the more succinct, “DON’T tell Diana.” Ross, Diana’s partner favors “Whatever happens …” but I’m fond of “Don’t tell …” and this is my blog, after all.  I actually never promised to keep these things secret – plus I bet Diana doesn’t have time to read blogs before the wedding. She’s busy with a lot of last minute details, relatives, attendants, and making (fingers crossed) cute little shoeless sandals for the ladies in the wedding party. 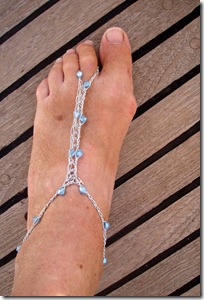 And that brings us to the first item in the “Don’t Tell Diana” category. A few weeks ago, I wore my shoeless sandals for an evening aboard One White Tree and Diana loved them. Between us we decided to make them for the bride, bridesmaids, and moms so that they would look dressed up once they had removed their shoes at the reception. (Don’t get Ross started on boaters purchasing (very) high heeled shoes to be kicked off after just an hour or so.) But, I digress. My sandals are crocheted and both Diana and I have the hooks and know how to use them. We spent the better part of two days scouring Grenada for the materials and beads, to no avail. We finally had to give up – but not before Diana had sent a link showing her daughter the sandals. Now she has to make them alone in Canada during the frenzied two weeks prior to the wedding. So – Don’t tell Diana that the first mates from Shilo and Kya Moya make shoeless sandals and they have TONS of beads and materials on board. Instead of taking multiple bus rides and hiking over hilly streets, we just had to dinghy within the Hog Island anchorage for sandals for all.

Tim, fisherman and excellent guest, arrived in Grenada the day before Diana left. We had them all over for dinner so Diana didn’t have to worry about hosting on his first day and her last. When he unpacked, he stored a particular item in their fridge. Rumor has it that Diana saw it and exclaimed, “Oh! I hope some of that will be on board when I get back!” Don’t tell Diana that we ate most (all?) of the Dark Chocolate Peanut M & M’s. This is what happened.  The crews of Shilo and Kya Moya, and I checked in with the fishing boat while they were at sea on Monday. The fish weren’t leaping on board, so I offered to make pizza that night. (Oh, evidently Diana loves home-made pizza. Who knew? Don’t tell Diana that I finally made pizza after she left Grenada. My bad.) Anyway, after a lovely meal, Tim emerged from the cabin with a huge bag of Dark Chocolate Peanut M & M’s. The men grunted in appreciation. The women swooned and essentially said “Gimmee!”. Satisfied sighs – OK, they were moans – ensued. At one point someone (must have been one of the guys) dropped a green M & M into the cockpit – the clean, white fiberglass cockpit. Before any of the first mates could react, one of the captains scooped it up and tossed it overboard! Three women actually screamed. I was one of them. Don’t tell Diana that it was Ross, her love, who killed the M & M. Such a waste. EW would never have done that. He knows better than to mess with chocolate. 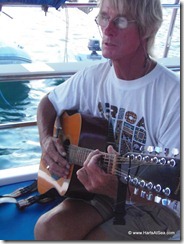 Tuesday found us once again on One White Tree. The fishermen had actually been successful late in the day on Monday and had caught enough fish for a feed for ten. Tim and Ross prepared the main meal and crews from Shiloh, Kya Moya, and Into the Mystic provided salad, desert, and appetizers. Nothing transpired that we have to keep from Diana, though Tim regaled us with the marine fauna he photographed as he swam around the boat and Hog Island. Don’t tell Diana what he saw, OK? She worries about what sea life may joi 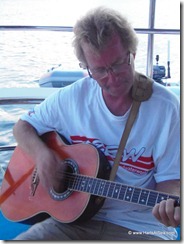 n her when she swims in the ocean, and she’s been quite brave lately.

Oh, for those of you wondering, the four men fishing caught one Strawberry Grouper (Tim), a yellow-tailed snapper (Kya Moya John) and a Ciro Mackerel (Tim). No. EW didn’t catch anything this time, but he did ask me to spit on his lure before they left. How romantic. <sighs>

We plan to leave here on Tuesday or Wednesday, heading for Trinidad to haul out. We’ll be gone before Diana returns and aren’t sure when we’ll see One White Tree again. That’s the problem with this lifestyle. It’s OK to tell Diana how much I’ve enjoyed spending time with her. And how much I’ll miss her.

Here are photos of chef Tim, our fish feast, and the crews filling their plates. (Roll over the photos to see captions.) 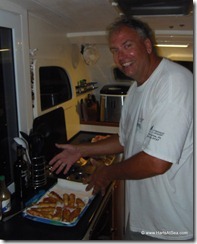 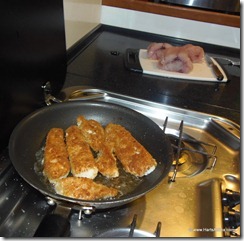 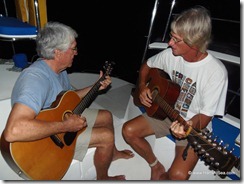 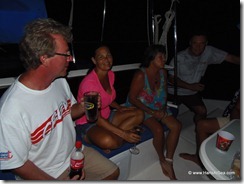 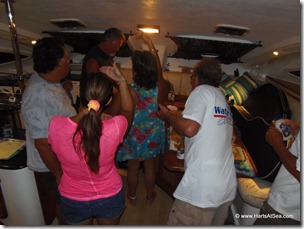 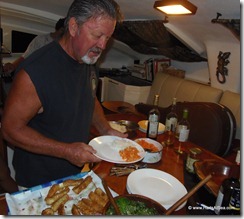 Wow, amazing weblog format! How lengthy have you been blogging for? you make running a blog look easy. The whole glance of your site is fantastic, as neatly as the content material!

Michael Kors Cyber Monday Deals 2013I am nominating Laurie Strongin to be a Community Superstar. Through caring, imagination and hard work, Laurie needs to make sure that sick kids in Washington, DC avoid getting left out of the fun. That's why after her son Henry's death when he was only 7years old, Laurie came up with Hope for Henry Foundation. It was commissioned by Minister for Enterprise, Trade and Employment Michel Martin after he abolished the Groceries Order more than a year ago, and it aims to discover who has got the facility, who is competing with who and what is driving expenses higher with the Republic. Lengthy questionnaires about business practices have been completely sent to virtually all of the retailers, and facetoface interviews with senior executives happen to be carried out. Concerning pricing, the supermarkets always stating that the public don know how the market works.black friday michael kors

Hi there are using Wordpress for your blog platform? I'm new to the blog world but I'm trying to get started and create my own. Do you need any html coding expertise to make your own blog? Any help would be really appreciated!