Don't Look. Our Dinghy is Following Us

Years ago, EW drove a blue Plymouth Colt Vista. I drove a nifty Mazda 626. We took my car when we went out  as his was kinda ugly and usually full of marine stuff. It seemed that most of the Vistas sold in Maine were blue and invariably, we see one turning a corner ahead of us. “My car followed us, again,” EW would say. The Vista didn’t want to stay home, because it or its twin would appear on nearly every outing, something that didn’t happen when we were driving the Vista. Remember, we’re from Maine. Can you say Stephen King?

OK, we both have a strange sense of humor and probably none of you would have chuckled at our little joke back then. But this time we are serious. The late (we thought) not-so-great, old Lunah Landah has followed us to Grenada. EW walked over to Budget Marine in Prickly Bay the other day and was bursting with news when he returned. “You’ll never guess what I saw on the dinghy dock at De Big Fish!”

“You’re right,” I replied, thinking that he recognized a dinghy that belonged to boating friends just arrived in Grenada. “Who’s here?”

I was shocked. And a bit suspicious. “How do you know it’s our dinghy?”

“It still has our Maine registration numbers painted on it.”

Of course EW didn’t have a camera, but that wasn’t a problem. I got on the VHF to our friend Jack on Mekia and asked him to take a photo and email it to me. He graciously did so that afternoon.

This dinghy is an inflatable floor Baltik purchased new on eBay a number of years ago. It’s designed to be used in more temperate climates and rolled up into it’s bag for the winter. (It took me HOURS to get it into the bag the first time.) 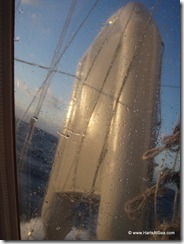 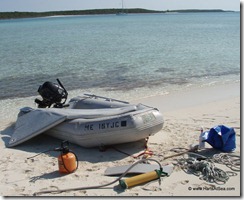 We began patching the inflatable floor in the Bahamas and continued to “fix” it through the summer in Grenada. When the transom separated from the hull, EW devised a bolt-nut-5200 fix that held.

In December we sailed to Puerto Rico and happily took possession of our West Marine hard bottomed inflatable, and for a short while we were a two dinghy family. 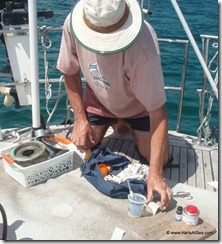 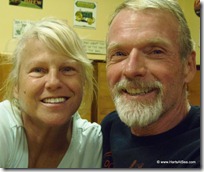 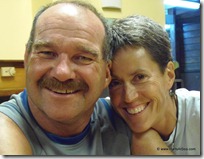 Our friends Carl and Carrie on Sancturary, and  Keith and Jaime on Kookaburra were living aboard and working in St. Thomas. Both boats needed an extra dinghy for a time – while repairing theirs or for commuting purposes. We happily gave them the former Lunah Landah with our blessings. We figured they’d take her to the landfill when done. Both boats are still in St. Thomas – but one of them must have somehow convinced some poor boater that this raggedy old dinghy still had some life in her.

Now, she’s back in Prickly Bay, where she spent most of the summer of 2011. That’s downright scary. Anyone seen Stephen King in Grenada? 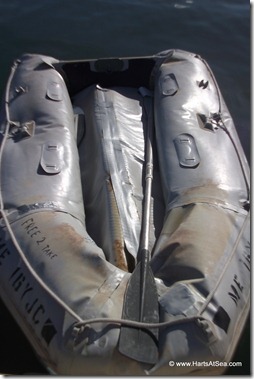