Man, oh man – we cruisers are an opinionated group. Whether we are circling the world, “simply” cruising in the Caribbean, or something in between it stands to reason that at least one person per boat will have a strong personality and firm opinions. After all, we have chosen a lifestyle that is not for the faint of heart. So it goes without saying that we are more than willing to offer our opinion --- whether anyone wants to hear it or not.

For the past few days most of us here in Grenada have been following Invest 99L/Tropical Depression5/potentially Hurricane Ernesto. As I’m writing this, it’s still a Tropical Depression, and is far enough north to nearly make us totally relax, but when we started watching Invest 99L, it was at  10 degrees north and 44 degrees west, and any potential tropical storm forming at 10 degrees north worries us. As was proven during Ivan and Tomas, Grenada is not out of the hurricane zone, but few hurricanes make landfall here. Last year we learned to pay attention to where a storm starts forming as it begins to cross the Atlantic. If it starts at a latitude of 12 degrees north or higher, then we don’t have to worry about it. All/nearly all/most hurricanes travel in a bit of a northerly direction at some point and since we are at 12 degrees here in Grenada, we ignore storms that will definitely pass to the north of us. (By that I mean we don’t make any preparations to avoid or hunker down. We do watch them closely with concern for friends, loved ones, and fellow cruisers in other ports from here to Nova Scotia.) Invest 99L started out at 10 degrees, giving him (since he may be called Ernesto) plenty of time to head west toward Grenada. (We are anchored at 12 degrees North and 61 degrees west.)

So we checked NOAA, Crown Weather, and Weather Underground on the Internet, listened to Chris Parker, and discussed contingencies. Aboard La Luna, we both subscribe to the “Better Safe Than Sorry” storm management policy. Ignoring the potential of this storm was not an option. Do we sail to Trinidad or hunker down in Grenada? We opted to move the boat yesterday morning to a slightly more protected spot, with more swinging room. We also agreed to watch the forecast and to track Invest 99L. If it continued to head west, we were going to check out of Grenada and sail to Trinidad. The timing was important as it is best to leave for Trini in the evening, and Thursday night would be too late. If we were going, we were going on Wednesday. In the chart below, the gold star on the far right shows where Invest 99L was when we started watching him closely.  The purple star on the far left – the one right before Grenada – is where he was projected to be on August 3rd. Yikers!

And yes, that black boat-shaped thing on the far left – is where La Luna is anchored. Did I say “Yikers!”?

But, as you can see by following the yellow brick stars (or whatever) what is now Tropical Depression # 5 is indeed heading more west than north, but has gone far enough north to avoid Grenada. (Thank you very much.) 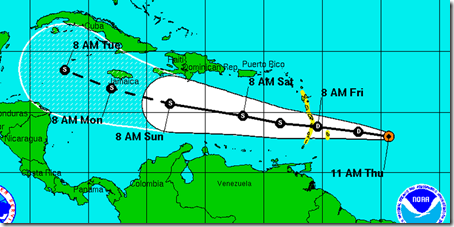 As you can see, he headed west until early this morning, though the last position we took last night showed a bit of a northerly track. He went north overnight and is again heading west.

At right are the track projections as of 11:00 AM on August 2nd. Grenada is that tiny green dot below the line of yellow dots.

We’ll probably see some weather as a result, but we’re still not sure whether there will be 25 knots of wind with gusts at 35 (not a really big deal), or 35 knots sustained with higher gusts (not a hurricane, but potentially a challenge). Now, when I say “we” here, I mean any of the boats in Grenada – and that’s where the opinions come in. There are a few rules for sailors. One is that you are responsible for your own boat. Another is that you need to aid another in trouble if you can do so without loss of life or limb or whatever. So, while we all must make our own decisions about storm preparation, we also all have a bit of investment in what our neighbors choose to do – or choose not to do.

A boat not anchored properly will break free in a blow, or will swing into neighboring boats. Unsecured things on deck can foul other boats or cause injury. Furling sails may be unfurled by high winds, causing all sorts of damage and causing that boat to “sail” on anchor. None of this is fun for any of us. EW and I chose to prepare for 40 knots. 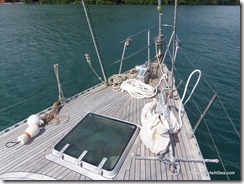 All of this took about 5 or 6 hours. It was a good exercise. If we have a real blow, we’ve done more than we think we’ve needed to do to keep us and La Luna safe. She deserves that kind of attention to detail.

Here’s what we have not done:

Sometimes I just want to say, “Get over yourselves!” Probably half the people in our bay have not removed sails. I hope they have no problems. I hope that what EW and I have done will be filed under the category of  a “good exercise” or “trial run”. I know I’ll sleep well tonight – at least until the storm hits. If it does. I guess what’s important to me is that EW and I have taken the preparations that make us comfortable – and we haven’t been too snarky with our fellow cruisers – except in this post.

As I said, we are all very opinionated.

NOTE: So, I may have mentioned a few times that I feel asleep during the on-line SSCA weather course before we left the states. I’m learning by doing. If you want to learn new terms – here are a few relevant ones from NOAA.

Invest:
A weather system for which a tropical cyclone forecast center (NHC, CPHC, or JTWC) is interested in collecting specialized data sets (e.g., microwave imagery) and/or running model guidance. Once a system has been designated as an invest, data collection and processing is initiated on a number of government and academic web sites, including the Naval Research Laboratory (NRL) and the University of Wisconsin Cooperative Institute for Meteorological Satellite Studies (UW-CIMSS). The designation of a system as an invest does not correspond to any particular likelihood of development of the system into a tropical cyclone; operational products such as the Tropical Weather Outlook or the JTWC/TCFA should be consulted for this purpose.

Saffir-Simpson Hurricane Wind Scale:
The Saffir-Simpson Hurricane Wind Scale is a 1 to 5 categorization based on the hurricane's intensity at the indicated time. The scale provides examples of the type of damage and impacts in the United States associated with winds of the indicated intensity. The following table shows the scale broken down by winds:

A detailed description of the Saffir-Simpson Hurricane Wind Scale is available at http://www.nhc.noaa.gov/aboutsshws.php

A hurricane that is classified as Category 3 or higher.

Tropical Depression:
A tropical cyclone in which the maximum sustained surface wind speed (using the U.S. 1-minute average) is 33 kt (38 mph or 62 km/hr) or less.