When Every Day is Saturday 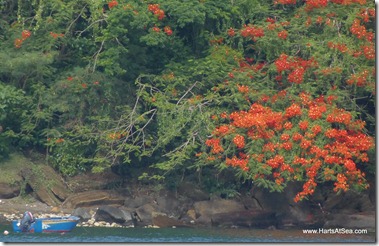 It’s hard to remember the day’s of the week here – and forget knowing dates – every day has the potential to be the same. The reality is that this cruising life takes discipline.

There are times when I have no discipline – that’s when a week or two – or whole month – go by when I haven’t written any new posts, completed any major boat projects, exercised regularly, become a better person, saved the world … well – you get it.

Somehow I lost my oomph in June and am still working on getting it back. Today I resorted to creating a check sheet similar to the ones parents create with their eight-year-olds. Here are the things I must do every day, and here are the things I must do every day we don’t undertake a major excursion or full-day boat project. I need to get my groove back and am willing to do what it takes to make that happen. (Except this check list will not become a colorful poster on the door of my room. After all, I am not eight years old.)

On the other hand, living a month of Saturdays once in a while is definitely pleasurable.  We’ve both read a lot – and mostly good books. EW had never read To Kill a Mockingbird and so enjoyed it that I re-read it after he was done. I’m working on learning my “new” camera, and taking a lot of photos. The new project there is to learn how to adjust the settings when subjects are backlit. Suggestions will be appreciated – particularly when I once again take photos at the Sunday Jam session.

We go to bed when we feel like it and wake earlier than I want to.

I am provisioning and cooking much better than I did the first year out. We’ve only had popcorn for supper twice in the past three months.

We are making new friends, moving the boat into different anchorages, sailing some, swimming, and have completed a few hikes. We had company and that was my favorite week of Saturdays. 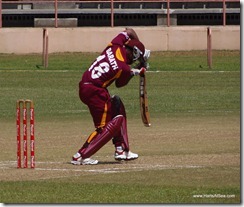 A few weeks ago we attended a cricket match between the West Indian team (made up of athletes from a number of different Caribbean islands) and a team from India. It was incredibly exciting not, in fact both our friend Dave from ReWa and EW fell asleep for a time. 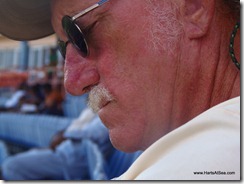 We attended with crews from the Australian boats Jabiru, White Rose I*, and Blue Pelican. The stands were nearly empty as this “Saturday” was on a Friday and most of the local folks were working. Our Aussie mates spread out among the Yanks they had enticed to the match and cheerfully taught us the rules and customs of the game. 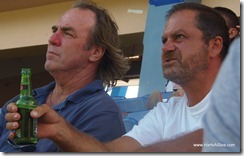 The West Indian team was badly beaten, in fact their bowlers were disgraced with at least three “Golden Ducks” – essentially getting “out” without  having a successful hit. Bowlers have a lot  of chances to make a successful hit and often each team may use only 2-4 bowlers for the entire game.

(At right, Jake the Yank is being instructed by Steve the Aussie . Steve’s the one with a beer and the sneer. Evidently beer is essential for Cricket matches, and the fans get just as disgusted with bad plays as Red Sox fans do.) The Golden Ducks are depicted on the score board.  This quacked me up. In this game, each team would receive 85 pitches. The Indians were up first and earned 142j in their 85 pitches. The West Indians didn’t make it to 85 pitches. Once a bowler is out, they are out for the entire game, and the West Indian team went through all of their team before receiving all 85 pitches and the game ended. 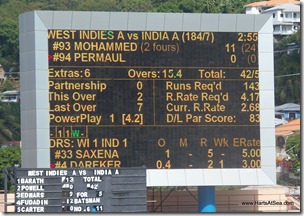 Part way through I had figured out that math is important to cricket and kept trying to figure it out in my head – then I finally noticed that the scoreboard does it for you. Cool.

The Aussies were disgusted that we hadn’t seen a good game, but  this excursion whetted our interest in cricket and allowed us to understand the game better, I think. We will certainly attend another game – more intriguing is that we’re going to play in a cruisers’ pick up game on Saturday. I’m looking forward to it. 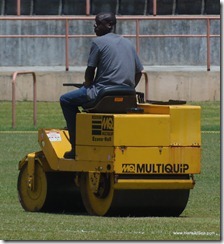 Finally – cricket has their own amboni – every Yank in attendance thought he or she was original in exclaiming that fact when this rolled out onto the field.

EW went on a major  hike last Wednesday the 11th , and spent the next few days icing and tending to his knee. He’s fine now (thanks to a excellent idea from Lynn of Silverheels III). This hike lasted 8 hours and was brutal. Since I didn’t attend (thank goodness!) I suggest you check it out on zero to Cruising’s blog post.

I’ve been working on a strange article/story using boat names. It’s been a good and fun exercise and keeps me writing when inspiration was fleeting. I have to see whether I can fix the “z” key on my Toshiba. It’s a pain to type “amaing”, and do spell check to get that “z” to use in other words. That would be a Saturday project in the real world.

This morning, armed with my check list, I arose and immediately went on deck for a yoga session (exercise every day – check); after a smoothie breakfast, I am sitting at the computer writing (check) and getting some on-line work done (check), while EW replaces the engine zincs and changes the oil. Once he is done, I’ll defrost the freezer and skewer clean the galley today’s one-hour-of-cleaning project (check). Later I’ll get myself cleaned up and visit a bit with others before I work on editing the book (check). It may feel like a Saturday, but it’s Wednesday, July 18th and I’m going to get some things done.

I am. Getting. Things. Done.

*Factoid: In Australia, your boat can’t have the same name as another registered boat. So our friends Lee and Don had to add the rather foolish “one” after White Rose to create a legal name.