I must be a writer because I’m having “Writers’ Block” – big time.

After closely documenting the first year of cruising, turning those essays into a book, and creating that book in both Kindle and Paperback format – I have been silenced. (Well, if you’ve met me, you know that I’m not the silent type – but I’ve not been writing. Not writing at all.)

I am taking photos. The new Olympus we picked up in December in St. Thomas is a delight to work with – much better than any camera I’ve ever had and some of my photos are better as well. This improvement could be directly related to how many photos I’ve been taking. The law of averages would indicate that some of them would be good, whether I’m getting better at photography or not.

I’m also working on marketing the book. Eventually I’d like to make money with this writing thing. The experts in self-publishing are clear that you need more than one book to make any money. So I’ve begun notes for the second book, and dreams for a third. But first, I need to market this one more consistently, fix the typos and mistakes in the Kindle version and put up a second Kindle edition, and complete the www.SailingtoWindward.com blogs of photos from that first year.

I still need to write new things – I have made a list of 16 different posts for this blog, have two magazine articles in the works, and ideas for the second book running around in my head at odd moments. I’ve sat down at the laptop a number of times over the past few weeks and deleted every effort. Ugh.

So what finally motivated me to forego an outing with EW and other cruisers and sit and write today? Two things. 1) The knowledge that if I’m going to ever make money at this I must write every day, hone my skills, and keep the ideas flowing; and 2) A really bad Amazon review for Harts at Sea – Sailing to Windward.

Up to now, I’ve enjoyed reading the reviews – almost all of them were positive, and only one was from a relative. None of my dearest friends wrote a review, feeling that folks would know they were biased. A few cruisers and boaters known to me kindly wrote reviews, but most of them were written by strangers. I was actually delighted to get my first negative review and tickled that he used a quote from one of the essays to emphasize how much he didn’t connect with me. That’s cool. A lot of people don’t find me funny – something I got over when I was in Jr. High.

This most recent review was just a bit nasty. He didn’t have to mention how agonizing he thought it would be to sail on a boat with me. That’s just plain mean. And he was wrong when he suggested that all of my reviewers were relatives. After I got over that, and “processed” (whatever that means) I realized that this review didn’t matter any more than the other negative one. He didn’t like the book. Not everyone will like the book. I’m truly OK with that. Even though I still find things to fix or change as I work on the second edition for Kindle, I still like the book. I’ll get better, but I had things to say that people found interesting, educational, or funny and I said them. (Mostly with correct grammar.)

I’m a writer. Time to get to work.

In the meantime, please enjoy these photos – a taste of things to come when I get those 16 posts written. 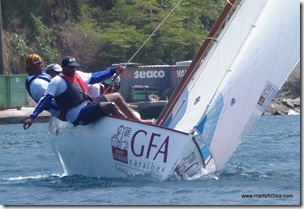 A couple of boats in a regatta in Isles des Saintes, Guadeloupe. 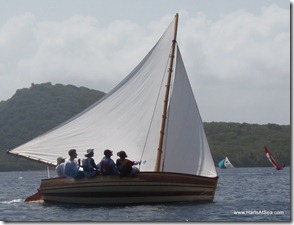 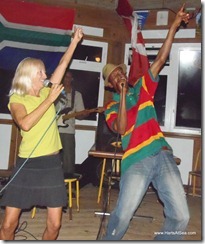 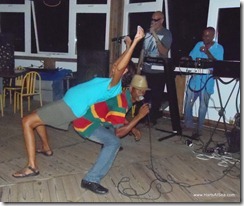 Gail from Jaibaru and Jackie from Compass Rose, getting into the swing of things with Illusion at Clarks’ Court Bay Marina. 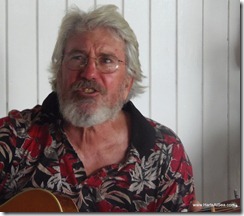 EW in his new fierce rock star singing face. (A (only slightly inebriated) cruising lady thought he might be Jerry Jeff Walker. I laughed. (I can be mean like that.)

Peter from Jaibaru and Ross from One White Tree. 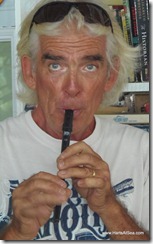 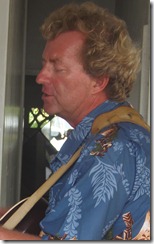 EW really getting into the Lime Comancheros Pan Band exhibition. 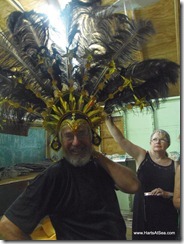 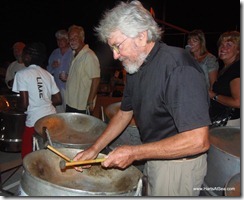 I don’t think the head gear is is best look, but he was definitely WERQ’ing it. 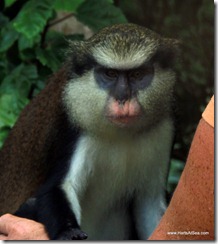 A little green critter and a friendly young monkey.

His fur was so incredibly soft and I love that he held my arm as I loved on him.

As you can see, writers’ block and one bad review hasn’t stopped me from having any fun in Grenada. Life is good, and I know that.

I must admit that I have written at least one negative review of a sailing book. I think it's to be expected. Sailing embraces so many different kinds of activity from cruising to ocean racing to one-design racing round the buoys to dinghies and windsurfing and so on, that sometimes one man's passion completely fails to excite the next man.

It's good to see you surfacing! I HAVE read the book. I have NOT left a review. Partly for the reason you mention in the post - and partly because it would be like writing a review of a friendship. I feel I'm living this with you - not just reading about the adventures of some couple throwing caution to the wind and setting sail. It was a bitter sweet - funny - sad - happy - gut-wrenching read. All at the same time. I loved it. Maybe I'll cut and paste this into Amazon. Maybe. (((hugs))) Miss you guys very much.

Thanks for the comments. I totally agree with you, Tillerman. This sailing life has many facets. Hope you are having a great season.

Lynnelle -- I just love you so much. Miss you. Thanks for the verbal hugs.