EW and I Play Cricket (And I Scored!)

On Saturday, we played cricket.

Now, stick and ball games have not been my strong suit. In neighborhood pick-up softball games, I played far outfield, and had few (if any) hits, and never, ever scored. During my freshman year at university, I took tennis for a quarter and didn’t treat it with the reverence the instructor required. She would frequently “forget” something in her office and ask that I retrieve it just to get me off the court. Regardless, when some cruisers from Britain announced they would set up a cruisers’ cricket game, I quickly signed my name and EW’s to the roster. We had attended a cricket match a few weeks ago and it seemed to be a much more relaxed game than softball. I knew that the cruisers used tennis balls that are taped with blue masking tape to provide a softer ball with the right amount of play. Cricket bats are much wider than baseball bats so I have a much better chance of hitting the ball – and in cricket, all you really have to do is protect the wicket. If I could do that successfully for 12 pitches, than I wouldn’t disgrace myself at bat. The Aussies who had taken us to the match had very generously spent time teaching us the basics of the game, so I even had an idea of how things work.

There’s a great description and excellent diagrams and photos of the field on Wikipedia. But allow me to provide the essentials – keeping in mind that the rules of our game were eased to help the American and Danish  players.

Cricket is actually played on a large round field, traditionally with a huge hemp hope outlining the boundaries. In the center of this circle is the pitch with two “wickets”. In a short game (there are cricket games that last for 5 days) each team is at bat once, and can remain at bat for hours. The batters’ primary objective is to protect the wicket. 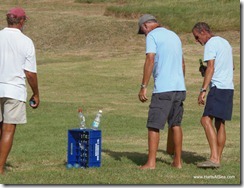 There are two batters on the field all the time – both from the same team. The bowler, or the person from the opposing team who pitches the ball, bowls first from one side than moves and pitches to the other hitter.

I’m not sure how this works in real games. In our game, each batter received 12 pitches if he or she didn’t get out.  Each bowler pitched 6 times from one end and then walked to the other end of the pitch to bowl from the other direction. If the batters hadn’t run, then the bowler would be pitching to a new batter, but if one of us had made a short hit and run for a point, then the bowler would pitch to the same batter from a different direction. (This isn’t as confusing as it sounds. Really.) So, when I went out to the pitch to bat, my goal was to stay for the full 12 pitches, protect the wicket and run if I or my batting team-mate hit the ball.

The rectangular photo of a real pitch above was stolen from Wikipedia. Here is our pitch and wicket: beer crates with plastic bottles on top. The bottles have a bit of water in them. If they get knocked over, the batter is out. This can occur by the bowler hitting the wicket with the ball, by the batter hitting or running into the wicket, or by the fielders throwing the ball toward the wicket to get the runners out. 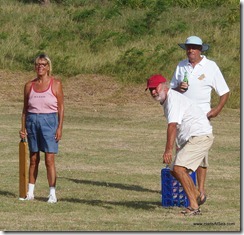 Remember that rope? We had boundaries in a more rectangular field. If a ball is hit over that rope (or our boundaries) without touching the ground inside, the batting team earns 6 points. If the ball rolls over the rope, they earn 4 points. They don’t have to actually run to earn those points. But if the batter hits the ball and thinks he (or she) can run to make points, then (s)he runs to the other wicket and the other batter on the same team must run to the opposite wicket. 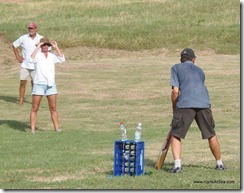 Our teams were made up of 8 or so (depending on whether the children were in or throwing a Frisbee to the corgis). We were fairly distributed by kids, women, those who grew up playing cricket, those who played baseball, and those like me who were in for comic relief. We were barefoot, in crocs, boating sandals, or sneakers. We wore floppy hats, drank beer while we played and laughed a lot. Those with bad knees could opt for a child to run for them. Said child was caught turning in circles instead of paying attention to the play, but it was all in good fun. 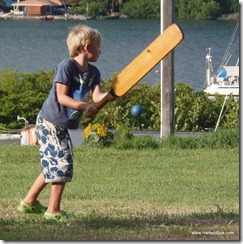 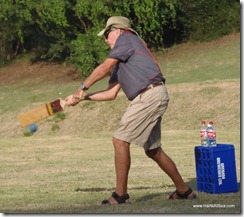 Both EW and the youngster missed these pitches. The kid did hit one that  protected the wicket. EW did not.

He did, however make a good defensive play when his team wasn’t pitching.

I was so excited. I don’t think I’ve ever scored in softball. Here’s the deal. When you run, you have to get “inside the crease” – the safe zone for the batter. It’s depicted by a white line on the professional field in the first photo. Here’s what’s hard for Americans to remember. When you run you KEEP holding the bat. In fact, if you are running from one wicket to the other and your bat crosses the line for the crease as the opposing team knocks the wicket  -- you are safe – even if your body is still outside the crease.

I understood that. I understood that I could be called out even if my opponent was the one who hit the ball. I was ready to run at all times when I was in the crease and I held my bat out as if I were preparing for a sword fight. “On guard!” I was crouched, on the balls of my feet and ready to RUN! When I was the batter, I was ready to hit and run, if the ball went far enough to give us time.

And I did it. I hit the ball, and it went into the outfield (inside the boundaries) and I shouted “RUN!”  to my batting team-mate Erling, and we ran, and we scored a point. If we could have run back again, we’d have scored two. We won the game 37 to 33 so my point wasn’t crucial, but we won and I helped because I SCORED!

Yes, EW and I had a blast. Yes, we are going to play again. We’re even going to go into Clark’s Cove Marina and borrow the equipment to practice catching. I caught one ball during the pre-game warm up because it hit my upper chest and bounced softly into my hands. (Picture that. It didn’t hurt.) 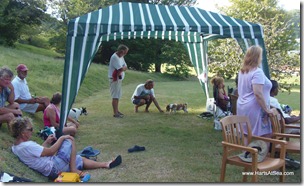 This is a very civilized cricket game. Bob from Clark’s Court Marina, keeps the field mowed and brings up chairs, a small tent, and a very large cooler filled with beer, water, and sodas. There are two score keepers, Helen from Iguana who keeps count of the pitches and overs and score and Ricki, another cruiser, who keeps score of those who purchase a drink. We pay at the bar after the game. Ricki’s husband Colin was the very able umpire. Before the game, I bought him a beer and batted my baby blues at him. Not saying that helped, but it didn’t hurt. 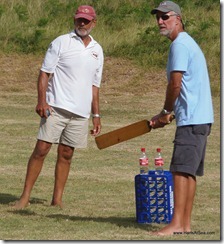 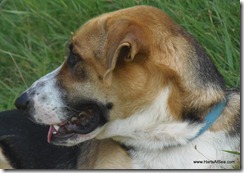 Nick at the wicket and Eric – one of the bowlers 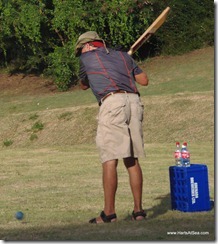 EW showing the problem with American’s and cricket. We keep holding the bat over our shoulder – while the ball generally comes in below our knees. 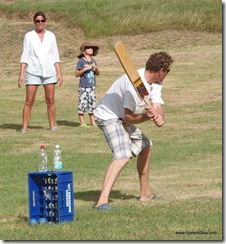 These three (and one older son not pictured here) are from England. They’ve gone around the world. This six year old boy and his older brother has circumnavigated and crossed the Atlantic twice. They are great kids. Their dad hits four and six pointers.

The photos of above of EW at bat and of the youngster at bat were taken by Jacques from s/v Panache, using my camera. I was actively playing outfield and had to pay attention to the ball.

These four photos were taken by Jacques and Annet on their camera. They were kind to email them to me for this blog – and for posterity. After all, I scored!  (Note that EW is running after his team mate made a hit, but he is no longer carrying the bat. That’s a bad thing as in …. You’rrrrr OUT!) 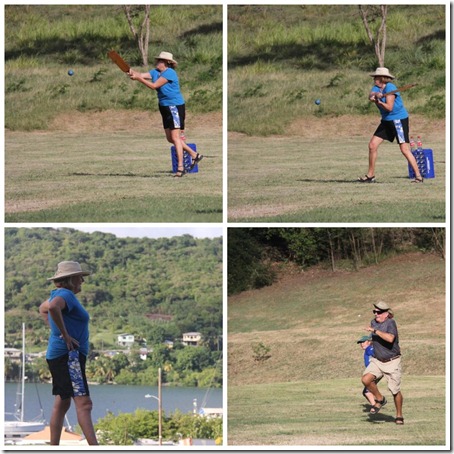 Finally, I’m not sure how they relax after a game in Jolly Old Britain, but here we enjoy pot luck and karaoke at Clark’s Cove Marina. Here is EW with his MoJo working. 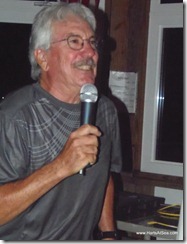 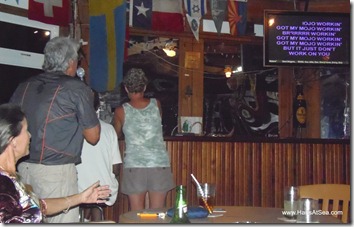 LOL. Very good description even if some of your terminology is not quite what we used to used in jolly old England.

And, yes, I'm sure when they play Test Matches (5 day internationals) at Lord's (very posh cricket ground in England) they ALWAYS celebrate afterwards with karaoke.

Ohhh. Thank you for that Geoff. I have fixed it. My apologies to Colin. Cheers, mate!