Home Archives Profile Subscribe
I’m a Writer?
When Every Day is Saturday

Anniversaries and "Another Projects"

EW and I celebrated our 27th wedding anniversary on July 6th. It was the perfect Caribbean Cruisers’ Anniversary – even if EW felt guilty early in the day.

This second year of cruising has been much easier – fewer unexpected (Another Project) boat projects; not quite as much sailing to windward; many fewer “intense discussion” (arguments). There will be no book about the second year because it would be a boring book for me to write. Nevertheless, right before our first guest couple’s visit (Cathy and Stu from Florida) one of the stainless steel uprights for the stern pulpit broke at the weld. Dang.

We decided not to fix it until our guests had left, simply cautioning them (and ourselves) to refrain from using that upright as a support when climbing aboard from the water. Last week, EW and our friend D’irv took the dinghy around to Prickly Bay to deliver one part from each boat to “TechNick” a welding and metal shop, owned by Nick somebody at Spice Island Marine. It was too rough to retrieve the parts via dinghy, so I walked with them a few days later, over hill and dale and hill from Secret Harbor to Spice Island Marine. We retrieved the parts, carried them back over hill and dale and hill in reverse order and sat our half stern rail on the bow while we took care of other, more important projects: snorkeling, writing, grocery shopping, book swaps .. well you get the idea.

Our anniversary was on the First Friday of the month, so by unanimous consent,  the monthly jazz/poetry event at the Granada National Museum was slated to be part of our celebration. EW suggested we hike to the bus route at 10 or so, take a bus to “the city” of St. Georges and enjoy the day there prior to the jazz at 5:30. I asked for a later departure so I could get some work done in the morning and we agreed to leave for town – showered and dressed up – just after lunch.

Of course, the stern pulpit had been eating a hole in EW’s to do list, so he began that project. It took, as most projects do, twice as long as EW anticipated. I was needed to hold the rail and help set the bolts. AT 11:00 AM we could be found perched on the stern, hot and sweaty with fingers blackened by caulk. “I’m sorry,” said EW.

“No worries,” I cheerfully replied. Despite not being able to tackle my list, I was actually enjoying working on this project with him. TechNick had expertly welded the two pieces back together exactly as EW had requested, and the eight bolt holes lined up perfectly. However, the weld had evidently added just a skosh of thickness to the aft end of the broken post mount and two of the bolts were not long enough to reach through the deck and accept washers and nuts.

Of course, we didn’t’ discover this prior to gooping up the holes and mount area with gooey black caulk. If we didn’t’ complete the project that day, we’d have to clean up all of that partially set caulk and start again. After many tries to “stretch” the bolts EW hauled out his fastener box and found two appropriately sized longer bolts. Much longer -- they’d have to be cut. EW quickly discovered that I am not an effective vise. (I may be his vice, but am not a vise.) I was game though, holding the bolt with locking pliers, resting on a can while EW wielded the hacksaw. After a few passes, he exclaimed, “I keep banging into your thumb!” “I haven’t complained,” I replied. He looked at me. “That’s just wrong. We need a vise.”

I went on the VHF radio on the cruisers’ channel 68. “Query for Mt. Hartman Cruisers: Does anyone have a vise we may borrow the use of?”

You can imagine the responses. Bob from Spirit immediately replied. “I have a lot of vices. Which one do you want?” An unidentified slightly accented lady replied, “Sure! Alcohol, sex, or gambling?” I thanked them with much laughter, and was delighted to hear from Tom on Tiger Lily. “I have a vise you can borrow. It’s attached to a board so you can come and get it.” That was the response I wanted.

Fifteen minutes later, we had bolts that fit. (EW uses the two methods for cutting a bolt and ensuring that it still works with the nut. I have no idea what that means. I just know it works.)

Here’s the thing. EW was a bit distressed that the project was eating into our anniversary celebration. I didn’t care. I was having fun, working with the sticky black stuff, helping him, on the deck in a beautiful harbor on a perfect day. This is cruising and this is our married life at sea. It was the perfect way to spend part the day. Once I realized how stressed he was about ruining our anniversary, I said, “No problem. I’d like us to be on the way by 3 at the latest. Other than that, don’t worry about it.”

We completed the job. I returned the vise and kept all of our vices. (They may come in handy later.) We showered, I put on my new best (only) dress --  a truly generous gift from Cathy who gave me her dress when she visited here – and we met Lynn from Silver Heels who had offered to show us a different, more rural walk to the bus stop.

We walked for 30 minutes in 85-degree weather over hill and dale on a rough path around goats, one very large bull and all of their droppings. It was wonderful. This is cruising.

We hugged Lynn, caught the bus, and went to BB’s, approved by Oprah and home of their famous crab back appetizer. We shared the 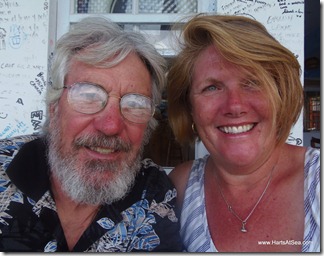 expensive dish, enjoyed the view and had piña coladas for “dessert”. 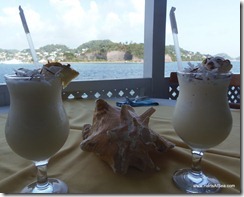 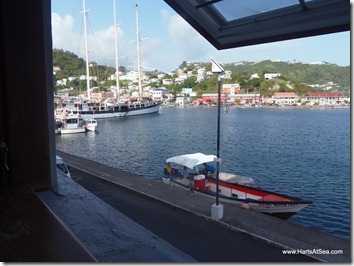 Then we wandered the area, settling in at Nutmegs for a light dinner and their second-story view of St Georges’ Harbor. 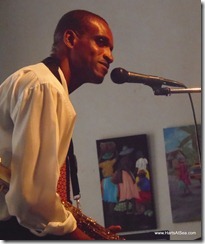 We made it to the museum before the 6:00 start with time to chat with many of the cruisers who had gathered for this event. I took photos. Folks wished us “Happy Anniversary”. We listened to good music, great music, incredible original poetry, and chatted with cruisers and locals. (Note to careful readers: The evening is advertised as starting at 530 – but this is the Caribbean. It never starts before 6:00) 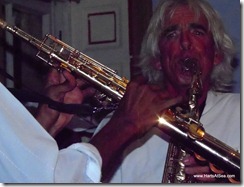 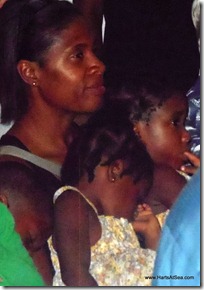 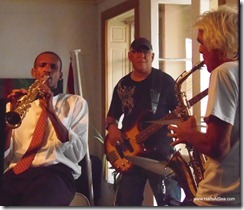 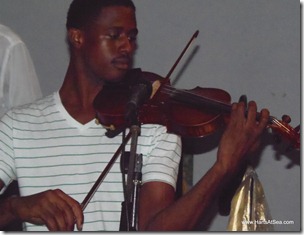 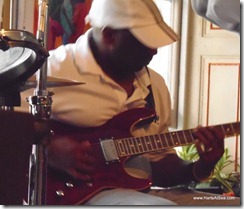 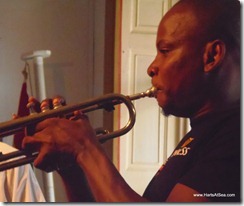