Laughing in the Rain with “Old” Friends

Of course we made it to St. Martin in time to play with John and Dora of S/V Windrifter. They will leave here this month to sail back to New England– a trip I envy for a number of reasons. Their plan is to take care of some business, sail Maine and Nova Scotia and return to the Caribbean for the winter. Based on our (somewhat) tentative plans, we may not see them for a couple of years since we hope to sail in the opposite direction.

While every Caribbean island is unique, St. Martin is doubly so. One side of the island is a French “department” and the other side was part of the Netherlands for many years and is a new country under the Netherlands flag. Boaters generally opt to check in on the French side, because it’s cheaper. Once that’s done everyone is allowed to move freely around the island. In fact, Everyone accepts US dollars, but most stores show French or Dutch prices. 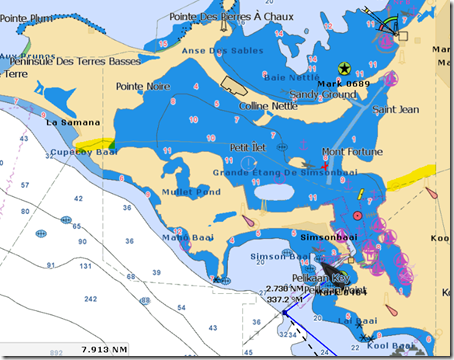 We sailed up from Antigua overnight, reaching to St. Martin, which means the wind was abeam, we were upright, sailed directly to our goal, and all was right with the world. We arrived into Simpson Bay around 7:00 AM and anchored off the beach on the south shore. (That black boat shaped thing in the lower right.) To enter the bay, one must pass through either the Dutch or the French Bridge.  The Dutch bridge is just to starboard (right) of that little black boat. The French bridge is near the black and yellow star in the upper right.  Highlighters on the left and right show the line of demarcation for the two countries. One mostly shops on the Dutch side, but many stores on the French side offer equal exchange between dollars and Euros and, as you may imagine, they have lovely restaurants over there.

We thought about anchoring in the bay as many do. We checked in with the local cruisers’ net and soon had a call from Windrifter. Very shortly afterward they arrived with fresh baguettes and croissants. I love John and Dora. 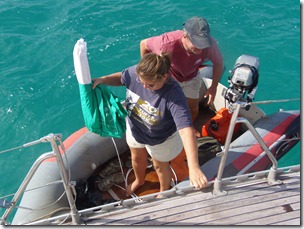 They suggested that we would enjoy anchoring in the lagoon, near them, and stayed aboard to pilot us through the 9:30 bridge raising. We anchored near that tiny red cross between Mounty Fortune and the little island, and dinghied up the bay to check in with the French.

We’ve shopped at Island Waterworld and Budget Marine. I’ve done some minor grocery shopping at the large grocery store on the Dutch side and have discovered that many of my staples are much cheaper than they were in St. Thomas. We haven’t yet been to the Cost U Less here, but I’ve started a list.

We’ve missed the hubbub of St. Martin in the season. This week the boats have begun to move north, south, and east, to the states, Grenada and Trini, or Europe. The mega-yacht docks are nearly empty, but the tourists still flock to the island and I understand cruise ships are still landing. (One of the best things about the lagoon Marigot/Simpson (depending on where one anchors) is that the cruise ships visit the southern end of the island. We’ll occasionally see a few cruise ship passengers on a boating excursion, but they have no impact on our lives.

In the week we’ve been here, Dora and I have walked all but one of the mornings here – long invigorating walks all along the roadways that line the lagoon. The four of us celebrated our arrival at Barnacles, enjoying their food and the open mic night. Last night we were invited for dinner aboard Molly Bloom. Captain Ron (no kidding) served outstanding tacos and fixings and a rousing game of dominoes. Unfortunately, it began to rain just as we were leaving our boats for a short trip to the shops before dinner. It poured while we were in the stores, so I purchased a box of garbage bags to keep us dry-ish on our way to Capt. Ron’s.

Those tall kitchen bags aren’t as big as one would expect. But they did help. Ron took one look at us and grabbed his camera while we tied the dinghy. I don’t blame him at all. Who could ignore this? 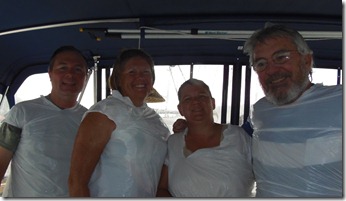 SIDEBAR:  So, we were in the dinghy just leaving the shops area and heading for Capt. Ron’s boat when Dora laughingly pulled one of the whole garbage bags over here head to keep the rain out. I took one look and broke into song. To the tune of “Allouetta”:

Suffocation. All around the nation.

First you buy a plastic bag.

Then you put it on your head.

My companions, including EW, looked at me with shock and awe and burst into laughter. None of them had ever heard it before, and I’ve no idea where I learned it. EW just kept shaking his head and rolling his eyes. Dora made me sing it twice more.

LOL. That song is hilarious. We need you to post a video on your blog of you singing it!

We must have learned it as kids because I know it too! Maybe we learned it at camp or at Newport
Grammar School.It's a classic along with "Little Duckie Duddle" !

I want your life.