Home Archives Profile Subscribe
Antigua Classics Regatta, the View from the Top
Laughing in the Rain with “Old” Friends

EW and I invited guests to join us on the last day at the Antigua Classic Boat Regatta. We had decided to leave Falmouth Harbor that day, Monday, watch the starts and head up to Jolly Harbor, with the plan to make the overnight sail to St Martin as quickly as possible. John and Dora from s/v Windrifter and former neighbors in South Portland, were in St. Martin waiting for weather to head back to New England for the season. It’s possible we won’t see each other for a couple of years so getting to St Martin was important.

Newer cruising friends, Ted and Marita from s/v Aurora had visited the Classics Regatta sans boat. They had sailed Aurora back to Grenada from St. Thomas for a planned three week haul-out, but as those things go, were still out of the water. Having made plans to meet non-cruising friends Dephanie and Don in Antigua, Ted and Marita had flown to the island and taken a room at small guest cottages on the shore. We invited all four to join us on Monday for the sail to Jolly Harbor. They would spend the night and take a bus or taxi back to Falmouth Harbor the next day.

The day was beautiful, and the racers enjoyed much more wind than they’d had the other three days of racing. There were largish swells from the east, making it a tad uncomfortable for the land-lubbers, but they were great sports and excellent guests. We had a beautiful day on the water, anchoring in the sands off of Jolly Harbor in the middle of the afternoon, just in time for Don and Dephanie and me to take a nice swim off the boat. Since the sail had been a tad uncomfortable for Dephanie and Don, I actually got away with only preparing one meal that day, a “lupper” late in the afternoon. Pihn and Joanne had gifted us with a packet of Maine lobster, so planning the menu was easy. We had lobster salad roll-ups for lupper, and dessert amidst a game of dominoes, truly initiating Dephanie and Don into the cruising life.

The next morning, I made our favorite frittata, adding in the left over lobster meat to make it truly special. I was channeling my inner charter chef. We haven’t had many guests this year, but look forward to more. These four were easy – boaters, good sports, sense of humor – what more could we ask? 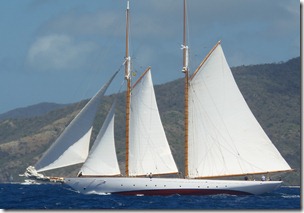 Here’s Elena, before her start. 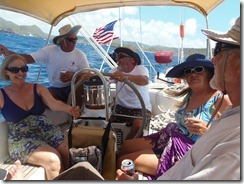 Our guests, Dephanie, Ted, EW, Marita, and Don – enjoying a day sailing off of Antigua. What’s not to like? 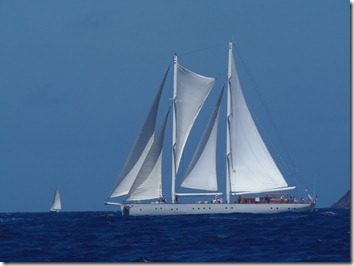 Kairos before the start. 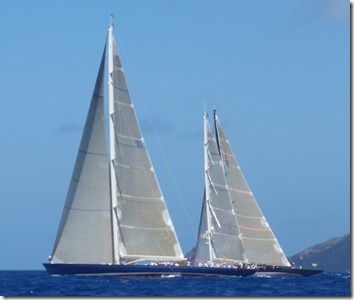 These two boats -- Rebecca in the foreground and Firefly just behind her -- race in the “Spirit of Tradition” Class. They enjoyed sparring before their start. We enjoyed watching it, and debated whether they’d make it back to the line for great starts.

They did not. The other two boats in the class started at the gun. These two were late, but quickly made up the difference. It was thrilling to watch Rebecca walk the fleet. 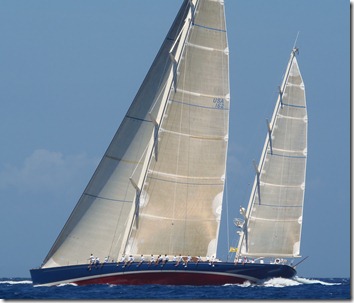 Here she is, racing.