Antigua Classics Regatta, the View from the Top 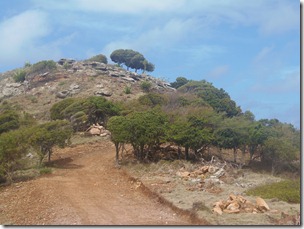 Sunday, April 22, began with a hike up in the hills along the coast of Falmouth Harbor. EW and I ended up perched high above the same bay we’d enjoyed on Friday. Instead of picking grape leaves and snorkeling, we watched the start of the day’s races.

We had a great view of the morning’s events … and saw Phin and Joanna who were back in their dinghy. 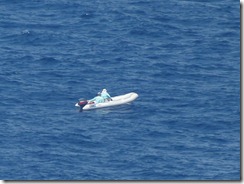 EW kept an eye on things with binoculars.

We arrived in time for the start of the Traditional Classes “Alpha” “Bravo” and “Charlie”, which include traditional Caribbean boats, like Jambalaya. 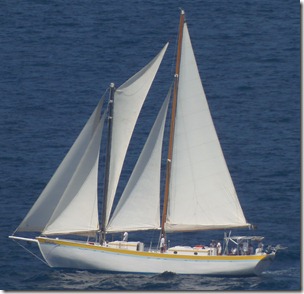 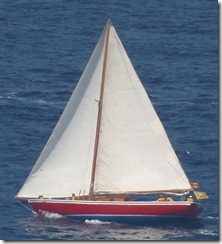 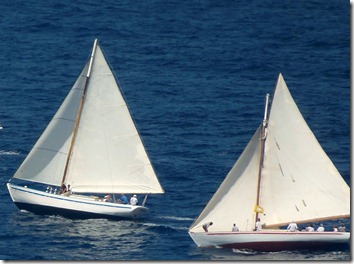 And then we, and the spectator boats and racing yachts, await the next start. 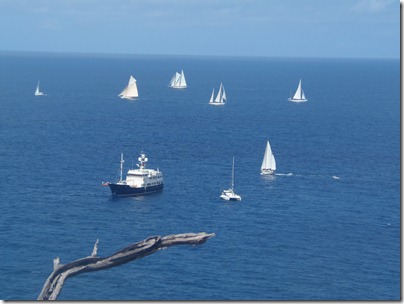 We didn’t attend the Skippers’ Meeting, so all I know is this start is the “White Flag Class”. That will mean essentially nothing to you. But they are pretty boats. Many were also over early. None were made to do “360’s”. We learned afterward that anyone over early loses five minutes on their overall time. Hmmm. May be worth it. 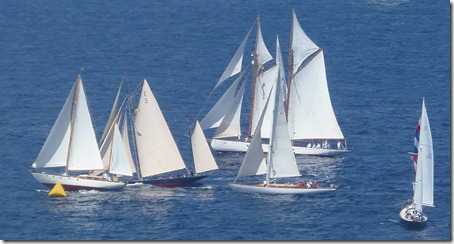 Here’s most of the class after the start. Those guys behind, aren’t really behind at all. They won’t lose any time due to starting early.  (Note, the boats going in the wrong direction are in a different fleet.)

At the “Purple Class” start, either Tuiga missed the start altogether, or was over early and insisted on doing a 360. In any case, she turned back and started again. 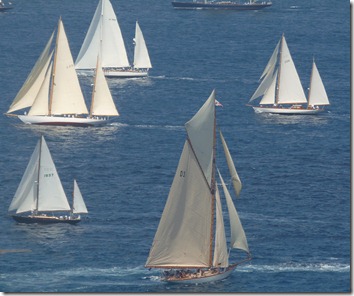 Joanna and Phin were up close and personal with Tuiga’s second start on Sunday. 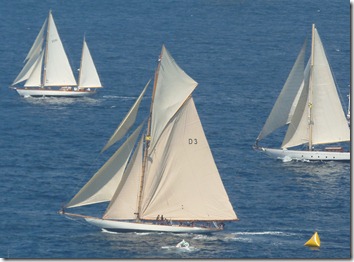 That’s them in the dinghy off Tuiga’s port quarter.

The “Pink Class” is for classic yachts, such as Elena, a gaff schooner. 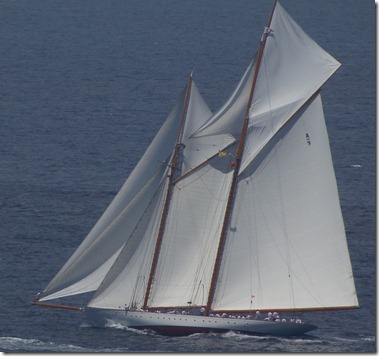 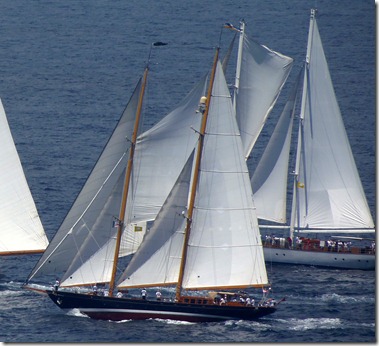 A number of the crew of the white boat are taking photos of the blue boat.

That’s what the Antigua Classic Yacht Regatta is all about.

The final class to start is the “Spirit of Tradition” class – new boats which pay homage to traditional ideas. (Sort of.) (In ways I can’t see.)

But they are magnificent. It’s the only word one can use to describe them. Well, that and fast.

There were four boats in the class. 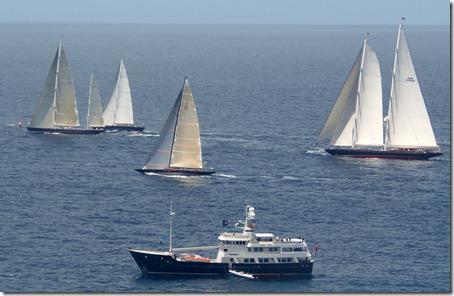 After the start, EW and I packed up our binoculars, camera, and water bottles, and headed back down the hill to meet up with Joanna and Phin. We had work to do.

For more information on this year’s Antigua Classic Yacht Regatta– visit their website.

New to Harts at Sea? I've written a book -- The Harts At Sea Sailing to Windward -- about our first year of cruising, from Maine to Grenada. It's available on Kindle (or Kindle for PC or Kindle for Apple) for only $2.99.