Home Archives Profile Subscribe
Laughing in the Rain with “Old” Friends
We Can Haz Wine?

An International Incident, or Just Another White Boat

It may have been a French/American thing, combined with a Male/Female thing. Whatever the underlying cause, one diminutive Frenchman really ticked me off in Antigua. I sincerely hope that no-one followed our VHF conversation when I finally got him to switch channels.

During my heavy weather row for exercise and inner peace in Antigua, I happened upon a lost plastic Raymarine instrument cover. Knowing it must have blown off of someone’s boat and that they would surely like it returned, I struggled to maneuver the dinghy in the chop and 20 knot breeze so that I could rescue the cover. Over the next couple of days I announced my find on the VHF, but hadn’t received a response, so when EW and I went to shore, I took a notice for the bulletin board outside of the SeaBreeze Café.

That afternoon, while EW was ashore getting a propane tank filled,  a French gentleman hailed La Luna.  In Antigua the boaters use 68 as a hailing channel in the harbor and we (well most of us) know to switch channels when we’ve reached our party in order to leave 68 free for hailing. This gentleman forgot, and spoke in lengthy sentences, so it was a minute or so before I could suggest we move to a different channel. He said, “Of course,” and followed me up the dial, so to speak.  I sincerely hope no one else followed, as I know that at some point in the ensuing conversation I  spoke in a snippy manner. So did he.

He had been told by a friend that we had found his instrument cover. I was delighted to be able to return it to the owner and told him so. He asked, “What marina are you near?” I said, that really, I wasn’t near any of the three marinas. I was anchored in the middle of the bay. “Well, I need to know where to find you.” I got that and went up on deck to better description of our location. There really was no better description. We were anchored almost exactly in the middle of the harbor. We were near three race/sail training boats from On Deck and all of them have prominent paint jobs and sail covers. I told the gentleman that we were anchored on the port side of the On Deck fleet.

He didn’t know what I meant, and got a tad snippy, again asking which marina I was near and asking me how I thought he could find me. I asked him where he was located. He also has a white boat, a multi-hull, and he was anchored at the head of the bay, up wind of us. (Well d’uh. The cover must have floated/blown away from him to us. He had to be in that direction. Ergo, I had to be aft of him in the middle of the damn bay. I did not voice my opinion. I didn’t get snippy until he said, “How am I supposed to find you in 3000 boats?” Sometimes a French accent is charming. At other times one can take the most maddening imperial tone with it. This was one of those times.

We went back and forth like that for a number of minutes. I told him we had a large American flag on our stern, the name of our boat, her color scheme. (Yes, we are a white boat, but our toast colored canvas is not as common, and we have a red boot stripe and bottom.) I told him I was a tall blond woman and I’d stand on deck and watch for him. Still, “Humph! I cannot find you like this in all of those boats. What marina are you near?” with a tone that suggested I was an imbecile. 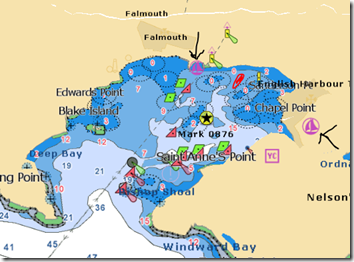 Good thing I chose not to work with the diplomatic corps. There were not  3000 boats in the anchorage. As a last resort, I began to give him my GPS coordinates, but he cut me off. So I cut him off. “What is the name of your boat? I will leave your cover at the Yacht Club Marina with your name on it. Good day.” And I changed the channel.

He ticked me off.

Not ten minutes later I heard someone with a French accent hailing “La Luna”. Seems he had found me, without my presence on deck. I grabbed the cover and he pulled his dinghy alongside, looking up at me with an imperious air. (I’m not kidding about that and the petty person inside of me want’s to relate that he’d be looking up to me even if we had been standing on the deck together.)

“Well, I’ve been sailing for some time and I’ve begun to know how you American’s think.”  Trust me, this was said with disdain, not admiration, but with self congratulations for his powers of interpretation.

I was unimpressed, and my first thought was to say, “Logically?”

On the chart, we are anchored at the star. Pretty much in the middle of the anchorage, and equidistant from both marinas. The marinas are marked by sailboats and I’ve drawn arrows to point to each. I assume my French friend was anchored near that red squiggle at the head of the bay.

I guess the French and the Americans are destined to misunderstand each other!

I would have been very tempted to throw the damn cover in the water and say fetch, that's how us Americans think. Ha! Ha!