What’s a year among friends? We were supposed to have arrived in Antigua for the 2011 Classic Yacht Regatta, but someone had the date wrong and we missed it. This year, we were determined to show up. After all, we had been invited to help host a party – the “Sail Maine Party” presented by Portland Yacht Services and several other Maine boatyards and marine companies. 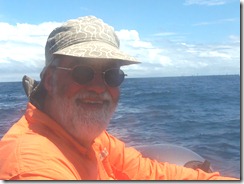 Phin and Joanna Sprague, owners of Portland Yacht Services have known EW a bit longer than I have. They are also experienced cruisers and sailors, having spent their first years together sailing around the world in a 72ft 1931 Alden Staysail Schooner with a revolving crew of five to seven people. They cruised before water-makers, GPS, Sat phones, cell phones, and many of the other boat accouterments that I take for granted. Phin is also the instigator and primary host of the “Sail Maine Party”, held on Sunday night at the Classic Yacht Regatta. The Sail Maine party was conceived to support the Regatta and as an opportunity to showcase some of Maine’s best boatyards. Also 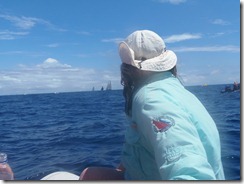 sponsoring the party were Robinhood Marine Center, Boothbay Harbor Shipyard, Hodgdon Yachts, Port Clyde Lobster, Lyman Morse, Rockport Marine, Wayfarer Marine, Brooklin Boatyard, and Hinckley Yacht Services. We had been requested to help. I wasn’t sure what that meant but knew that we’d see some Maine folk, eat lobster, and have fun. Essentially, I got to help throw a wicked neat party without having to plan it or pay for it.

The fun started on Friday morning when Joanna and Phin picked us up in their dinghy. Though they had arrived in Antigua via air, they currently store the dinghy to s/v Lion’s Whelp in Antigua. That’s handy. We watched some of the starts on Friday, up close and personal, and low to the water. 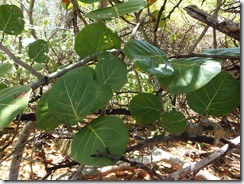 Afterward, we began our hosting duties by helping to collect 600 sea grape leaves. Really. It seems that they make excellent serving plates for small amounts of food, they are free, and they are definitely organic. Joanna knew which bay provided both an abundance of grape leaves and excellent 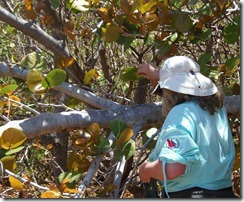 snorkeling. I like how she works. The bay is well protected by a reef and coral heads, but Phin and Joanna had clearly been there often. We waded ashore while EW helped Phin anchor and tie the dinghy.  After a swim and snorkel, we loaded ourselves and two huge bags of leaves into the dinghy for lunch with a view of the finish line. I provided lunch. We were a good team. 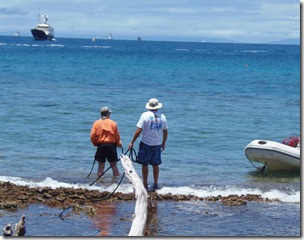 On Saturday afternoon Joanna and I walked up to a nearby home which was headquarters for food prep for the party. Two professional caterers, some paid staff, and many volunteers worked for two days to provide a large variety of food for the 600 expected guests. In the meantime, Phin and EW spent two afternoons inviting everyone in English and Falmouth Harbors to the party – creating some anxiety that we wouldn’t have enough food.

On that first day, Joanna and I had to wash 600 sea grape leaves. Do you have any idea how long that takes? Hours. I also had to squeeze a crate of oranges. A whole crate of oranges only yields a bit over a gallon of juice. I must admit that I grumbled a bit because I knew that much more juice would be needed for the rum punch for 600 people. “I think buying the juice would be more cost-effective,” I stated at least 10 times to various parties that day. Maybe, but it wouldn’t have resulted in true Caribbean rum punch. Turns out “my” oranges were sour ones and that bit of sour juice is needed for the authentic recipe. Now you know.

I will say, that squeezing a crate of oranges and washing grape leaves gives two women ample time to chat, laugh, and get to know each other. I’ve known Joanna for over 20 years. In Antigua, we had the opportunity to become friends. That’s a special gift. 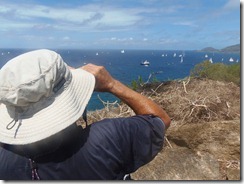 On Sunday, EW and I opted to hike up one of the hills between Falmouth and English Harbors for a bird’s eye view of the mornings starts. Oh, my. It was an excellent vantage point, and we had it all to ourselves. And the goats. We had taken our hand-held VHF radio and could hear the Committee Boat broadcast the start of each class, and see the puff of smoke as the gun went off to mark the ten-minute, one-minute, and start of each race. 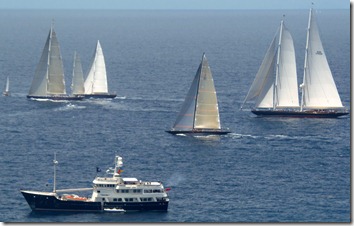 See the puff of smoke aft of the power yacht? That’s from the starting gun.

These are beautiful boats. More on that in the next post.

Afterward, we walked back to Falmouth, meeting up with other cruisers who had volunteered to help with the party. Alan and Kate from s/v Mendocino Queen and Dave and Lori from s/v Persephone had also watched the starts from one of the hills. The men then went off to set up tables and tents and the women joined Joanna, other volunteers, and me at the house on the hill. Our first task was to break up huge amounts of Maine lobster. We refrained (mostly) from eating as we worked and were helped by the presence of 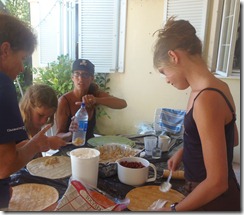 Laura from British Columbia and her three (triplet) daughters, Victoria, Elizabeth, and Alexandra. The girls are young teens who are enjoying a year afloat with their parents and younger brother. They weren’t allowed to eat while working and had to go wash their hands again if fingers touched lips. It was a good rule and we all followed it. They were shadowed by Lexi, whose dad and grandmom were cooking for the party, and one of the girls helped Lexi with her homework. 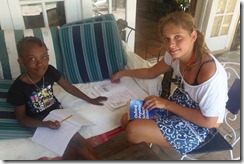 We made hundreds of roll-up sandwiches, a huge vat of salsa, and chopped, sliced, or diced herbs, vegetables, and bread. The real cooks made polenta, Caribbean lobster stew, fillings for sandwiches, lobster salad, barbequed chicken, bean soup, and a whole barbecued 30-pound kingfish. This effort used two stoves, a large outdoor pit grill, and a propane cooker for one of the three giant pots of stew. It was organized chaos but seemed to go quite smoothly. 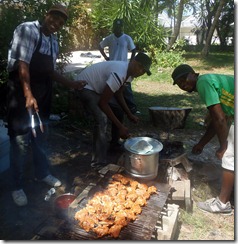 Here is the grill crew. And here’s the fish grilled in the yard. It’s on a piece of plywood covered with foil because it’s as big as a coffee table. 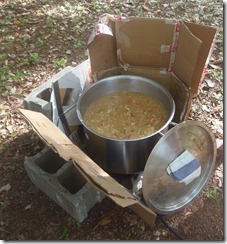 One batch of lobster stew, Caribbean style and oh, so good! 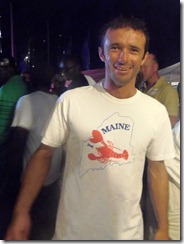 We worked until after 4, then left to get ready for the party, meeting up on the lawn of the Antigua Yacht Club at 5:00.

The party was a huge success. There was enough food for all and it was fantastic. The rum punches were just tangy enough. Here, they are being served by the crew from Wayfarer Marine. 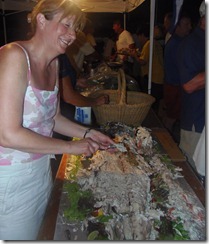 These two volunteers served fish for three hours. I don’t think either of them has been to Maine. Neither was a rum punch kind of woman, so I badgered various Maine boatyard reps to buy them their drinks of choice. Keep the volunteers happy! It’s what I do. 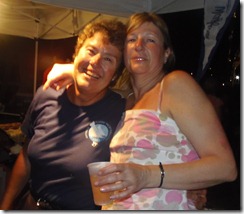 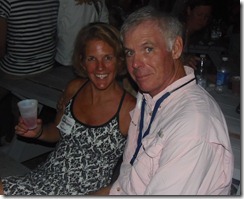 Dave and Lori, fellow cruisers, helped all afternoon and enjoyed the party that night, as did Kate and Alan, who are actually going to cruise in Maine this coming summer. 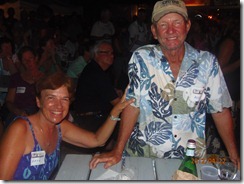 If you see s/v Mendocino Queen in your harbor, make sure to say hello. Kate and Alan are 3/4 of the way through a round the world cruise, are excellent sailors, and incredibly nice people. There was some sort of “issue” with the tents – ably resolved by Dave and Alan. Leave it to a cruiser to find a solution. 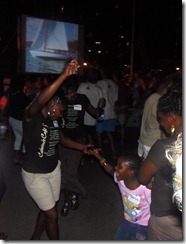 At left, dancing and Maine boats and harbors. The slideshow provided by Maine Boats Homes and Harbors Magazine. 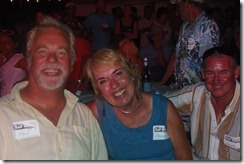 Serving punch and a smile from Hinckley Yacht Services 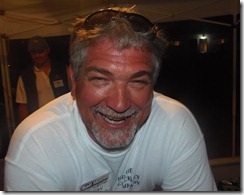 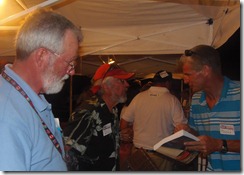 Maine …the way life should be … in Antigua. It doesn’t get any better than this.

New to Harts at Sea? I've written a book -- The Harts At Sea Sailing to Windward -- about our first year of cruising, from Maine to Grenada. It's available on Kindle (or Kindle for PC or Kindle for Apple) for only $2.99.

Sounds like a fantastic time!! So much good food. Ugh, it makes me hungry ;)