Home Archives Profile Subscribe
All He Needs is a Propeller!
Row, Row, Row Your Boat

Antigua, at Last We Find Thee

Somewhere late in our 32-hour-passage-that-took-60-hours, EW and I discussed the word, “hubris”. Defined on Dictionary.com as:

We were way to cocky at the beginning of the trip from St. Thomas to Antigua. I forgot many of the passage-making lessons that we’d learned in our first year at sea. (For those of you reading my book, Harts at Sea Sailing to Windward do as I say, not as I do/did/evidently keep doing.)

“The winds are from the east or north east. I may be a beat, but it should be a fairly straight shot. Does this  look like a straight shot to you? The winds were actually from the southeast. We were heading south east. That is not a straight shot for a sailboat. 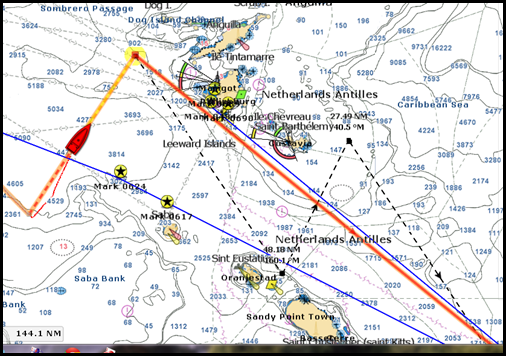 Let me give you a clue. The little red boat is La Luna, the light crooked line streaming aft is our track from the last tack. The yellow line is our direction on that particular tack. The orange line going from upper left to lower right would be our perfect tack to Antigua. The dashed black lines are our hopeful tacks to Antigua. The island with the light house we are aiming for? That’s St. Martin. St. Martin is NORTH of where we started and miles from Antigua.

We did tack (almost) at the turn point, but our next tack ended up north of Sint Eustatia (Statia to you tourists), not south of it. The whole trip was like that. Not bad. No boat problems, No relationship problems. We ate fairly well, and got more sleep than we usually do on a passage. We just took twice as long as we expected and we weren’t quite as ready as we thought.

We left with great hubris and we were humbled.

I spent my last night watch writing a checklist for all future passages. It will include things as mundane as checking to see that all hatches are actually dogged down. (Yeah. Seawater happened.) It will also include such things as crucial and disconcerting as ditch bags with valuables and papers in dry bags. The reason we didn’t tack fully to St. Martin is that I got spooked by all of the ship traffic, most particularly the local cargo ship who didn’t respond to my radio calls, and who cut across our bow. EW was on deck in time to see their stern and said they were a half mile away. I thought they were much closer. I would have had the ditch bag on deck with EW – if I’d prepared a ditch bag.

We left St. Thomas over-confident. That won’t happen again for a long time.

I also realized that while I’ve installed Sailmail and Airmail into this computer, I’ve never actually used this computer to send mail at sea. So, in addition to everything else that happened, I obsessed with not getting word to friends and family. We were safe. We were even happy. We were even enjoying the sail – for the most part.

We made it to Antigua. All is well.

Here we are at 4:39 AM on April 12th. We did tack south, turned northeast at the orange line, then motored into Jolly Harbor. All in big choppy waves that slowed us down considerably. Twelve hours after this shot was taken, we had checked into Antigua and dropped the hook outside of Jolly Harbor. This morning we motored to Falmouth Harbor and washed the salt off the boat, and much of the forward cabin.

PS. As I post this, at the Seabreeze in Falmouth Harbor, EW has guzzeled his G & T and walked to English Harbor because the Seabreeze doesn't accept credit cards and there are no debit machines in Falmouth. None. A yacht club, a marina, restaurants, stores, no debit card machine.

Now here's the bad news. Just talked with sailors we met in Grenada. The debit machine here doens't take Master Card.  He came back not happy.

On the move again, eh?? Where to next? How long are you going to be in Antigua? We were there for a short time, hope you have a good time. Enjoyed your book and the honorable mention!! Say hi to Stew, and Jack sends licks and wags!! Hugs to you both!!

I'm glad your 'hubris' sail was a kind one. Ours was a mean, rough, wet, kidney bruising 'only an overnighter' one. We now also have a checklist. BTW we call that a heartbeat track.