Home Archives Profile Subscribe
You Want to Sail Where?
Antigua, at Last We Find Thee

All He Needs is a Propeller!

We could have died a couple of weeks ago. We were returning from Crown Bay in the dinghy in the dark of night. I was on the bow, holding a bright flashlight and occasionally turning it in a circle to show a light in all directions. I also looked behind us and to the left and right, watching for other vessels. EW was driving, and though he tends to focus forward in those conditions, he also glanced behind us every so often. Still, we both missed it.

A container ship was steaming out of the harbor and we didn’t see or hear it until she was right off our port aft quarter. We were heading gradually to port toward our anchorage and could easily have found ourselves under the bow of that ship. It would not have been pretty. It was a close call, but not so close that it activated our flight or fright hormones. EW did turn directly to starboard and we both exclaimed, “Wow! I didn’t see that at all!”

I did, however lose a bit of sleep over the incident, and apparently EW had been dwelling on it, too, so when we visited Budget Marine on our last shopping trip in St. Thomas, and EW asked me to check out LED dinghy lights. I was happy to do so. There are many to choose from. Some attach to the motor, but we think that’s too low, as the driver and passenger would block the light from the front.  EW says, “The light should be visible from 360 degrees at the highest point of the boat.”  There are poles that one can mount on the dinghy’s transom, but we 1) found them expensive, and 2) were not thrilled to drill holes in our new transom, and 3) think it would get in the way and bumped on shore or at crowded dinghy docks. We’re probably wrong about all of those excuses, but fortunately there is a solution. Even more fortunately, neither of us worries about looking like idiots.

Enter the Navi Light 360 by  Navisafe. Oh my. This bright, 360 degree LED light comes with a powerful magnet mount that can attach to the motor (too low) screw into a mounting pole (see above) or be worn on a cap. So guess what option EW chose? 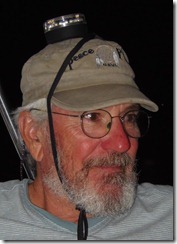 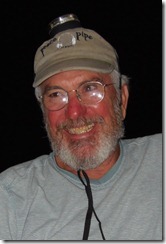 Peter from s/v Too Much Fun was the first of our friends to see the new purchase. He admired it. (Really.) And he immediately riffed on it.

“All you need is a propeller!”

Well, you get the idea. Make up your own caption and we’ll have a contest. The winner gets a free copy of Harts at Sea Sailing to Windward for themselves or a friend.

Caption either photo. Have fun with it.

But remember. No matter how stupid we may look, (yes, when I’m driving the dinghy at night I’ll have to wear it, too) we will be much, much safer. That’s worth it.

(Still any bets that EW gets a pole mount and drills those holes within the year?)

If you went to the link for Navilight, you’ll see that they have attached the light to the hat in a much more professional manner. It will allow the hat to stay connected to the light, but I’m not sure how it keeps the hat on the driver’s head. We’ll probably check it out.

By the way, this sucker is bright!  We couldn’t turn it on for these photos, and I can’t look at EW when he’s wearing it. Bright is good. We want those container ships to see us.

Wishing all our loved ones Easter and Passover blessings.

If the light was red you could change EW's name to Rudolph!