Home Archives Profile Subscribe
Buh-Bye, St. Thomas. It Was Fun. And Filling.
All He Needs is a Propeller!

You Want to Sail Where?

Last week, I left EW for two days when I went off each morning to help Jan Robinson and her crew sell shirts and towels and other memorabilia during the St. Thomas Yacht Club Rolex Regatta. 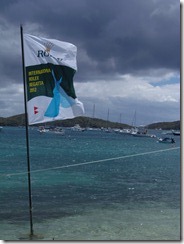 It was fun, sort of like my trade booth experience at boat shows and chamber shows. We sold a lot of shirts. I met some interesting and nice women, and got a change of scenery. 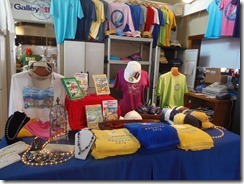 EW stayed on the boat, for the most part. This has proven to be dangerous. Usually I’m the one who spends time thinking and planning and coming up with new ideas for projects that EW has to undertake. But this time, I left EW to his own devices during a week when we were both anxious to sail. In fact, when talking with one of the women at the show, she asked, “Do you write about the sailing? Is that your topic?”

“Oh not so much,” I said. “You’d be surprised how little sailing one does in this cruising life.” Evidently EW has been feeling the same thing and he decided to do something about it.

On Friday evening, we planned pizza and movies on board, but EW had something he wanted to discuss first.

“Remember how we thought we had to go to Europe to get to Buenos Aires?” he asked.

“Yeah?” I replied drawing that one word out to mean “What have you been thinking?”

He grinned and grabbed World Cruising Routes by Jimmy Cornell. “Well, I was reading this and we can sail down there between November and March if we stick fairly close to shore. There is a favorable current. We can do long tacks.”

He looked so happy. His brown eyes were flashing as he hefted the thick book to show me the article.

EW had talked about sailing to Buenos Aires before we left Maine. When we visited our physician prior to leaving, he had us point out all of the countries we were likely to visit within our first five years at sea, and we got all the shots necessary. After getting down here, that trip to Argentina seemed insurmountable to me and EW seemed to let it go.

Not so. Barb Hart the First subscribes to the Smithsonian Magazine and gave a recent edition to EW. It included an article about Buenos Aries and all of EW’s prior longings rose to the top. From that moment on, I was played.

First, he made it sound easy. “It’s no farther south than North Carolina is to the north.”

Well, that didn’t sound bad. I checked the distance to North Carolina (less than 2000 miles)  and decided I could handle it. I agreed to the trip, and we made pizza.

A day or so later I did my own research.

“How long did you say it was to Buenos Aires?”

Here’s what he neglected to mention the first time. We would go as far south as North Carolina is north from the equator. We haven’t yet made it to the equator. That’s the extra thousand miles.

Still, I was cautiously on board. But I did some more research.

In fact, I plotted the course on our MaxSea chart plotter. The trip from Trinidad would be 4200 miles and some change. (But who’s counting? Certainly not EW!) 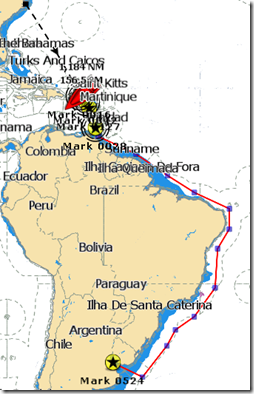 We’re going to do more research, but the reality is that we are seeking adventure and this would certainly be one. Plus, EW’s promised to take tango lessons in Argentina.

If we go, we’d leave Trinidad early in November and sail in 500-1000 mile hops down the coast of South America, planning to arrive in Buenos Aries in February. We’d enjoy that country for four or five months, then head back north in July or August stopping on other ports of call along the way.

Here’s a screen capture of La Luna (red boat) anchored in Tortolla. The dotted line to the north is the direct route to North Carolina. The red line to the south is our route from Trinidad to Buenos Aries.

What was I thinking?

I’ve started a list of projects for both of us. At the top of my list is selling my book Harts at Sea Sailing to Windward.

I’ll also need a new title for the book about this journey. There is a lot of sailing to windward in our future.

He better be good at the tango!

Fun! I'm glad you're the one managing that, Barb. I do remember studying Jimmy Cornell and thinking maybe...but there were a lot of ummms in that maybe.

The adventure continues! (You HAVE to do this, you know.)