Home Archives Profile Subscribe
We Lost Our Sense of Humor. (Don't Worry. We Got it Back.)
Jaime Likes Chocolate Cake. Good Thing.

The Dance Classes in My Youth Have Not Paid Off

Miss Marilyn would not be proud.

Neither would my mother. “It’s just a cha-cha rhythm, Barb. Surely, you can do that.”

“Friends don’t let friends clap on One and Three,” Peter Bonta has told me. It seems that I Zumba on One and Three, while everyone else kicks and shakes, and slides and shimmies on Two and Four. I Zumba. Therefore I sweat. Since exercise is the point, then I guess my Saturday mornings have been successful. Wish I didn’t feel like such a dork, though.

Evidently Zumba is big in St. Thomas. We learned from a fellow cruiser that most gyms offer classes, and she attends a class on Tuesdays and Thursdays held in the air-conditioned gym at the University of the Virgin Islands. She also joined me and at least 40 others at the free outdoor class held on Saturdays at Yacht Haven Grand. 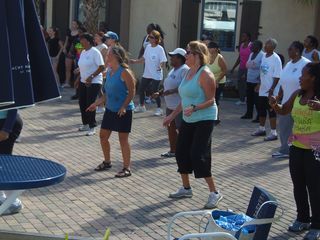 It’s a work out in the sun, and in public. Folks walking to work, to shop, or to have coffee, pause and watch this massive group of women (and one man who aborted his jog to join us part way through the class) moving to a Latin or Latin-ish beat. Today, two instructors took turns leading the routines. My favorite song had a western feel – that’s the Wild West – complete with lasso twirling hand motions. I could do that. Back in my youth, square dancing was an option for physical education. Really. But our dances were never led by a slender woman, with bare midriff and jangles tied around her hips (the better to encourage us to shake our boo-tay. Both instructors wore the jangly scarves, the second instructor is to my left in this photo. 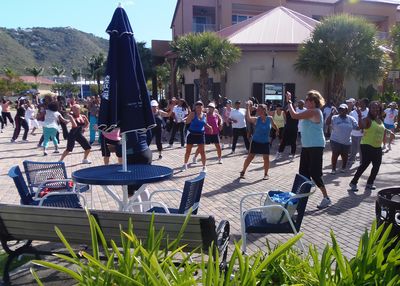 don’t call out steps. They dance and we follow. I can shimmy (a bit), I can Slide. Together. Slide Step – with a little Latin flavor (some), and I can move my arms up, down and to the side. What I can’t do, is put it all together. I looked like a dork. I went left when the rest of the class went right. I got off on the wrong foot. A lot.

But I had a great workout, and a lot of fun. I zumbad. (What is the past tense of zumba?) And I kept hearing all of these voices in my mind:

(In case you missed it, in the photo above right, I am one of two people facing right. Seriously. The other left!)

At least I was better at zumba than I was in that interpretive dance class in college. “Float across the floor like a leaf. Be the leaf.” Yeah. Right. Evidently leaves don’t giggle. Who knew? Forever Friend Kathy took that class with me, and we can still crack each other up with, “Float across the floor like a leaf”, followed by an eye roll. I wonder if she’s tried zumba. I am sure we shouldn’t be allowed in the same class, as it would be really embarrassing to be separated by the teacher at our age.

I don’t plan to attend Zumba three times a week, but I’ll go to the Saturday classes while we’re here as a way to add some spice and a lot of sweat to my daily exercise. It was fun. Really. Don’t I look as if I were having a good time?

Thanks to Ben from s/v Cricket, who took these photos, and to his wife Pam, who knew she’d end up in the shots and danced next to me anyway. Cruisers are like that.

I think you were a great sport! I once took belly dancing, when in my 30's. I really liked it. For one thing, being stick thin was not a requirement. It was good exercise, and you got to wear those cool outfits.

Thanks, Sue! I understand there may be a video on Facebook. One of the cruisers asked whether I minded. I told her to go for it. I figure EW is the topic often enough and he doesn't complain. Maybe I need a cool outfit. With jangles.