EW’s Open-Mic debut finally arrived on March 7th, during five days of very strong Northeast winds. We had endured a couple of wet dinghy rides that week and, while EW is sanguine about drenching me with salt water, he doesn’t feel the same about his Martin guitar. 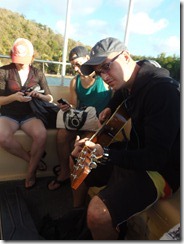 We took the Water Island ferry to Crown Bay and everyone stayed dry. On the way in, we were engaged by four professional performers from the Allure of the Seas. They had taken the ferry to Water Island to enjoy the beach on their day off. One of them asked to see the guitar and created a free verse song on the way back to St. Thomas. I’m sorry that we didn’t write down his name – he’s from Portland, Maine! They had to hurry back to the boat to get ready to perform in Chicago, one of the many entertainment options aboard the world’s largest cruise ship.

At Tickles, we joined LeeAnn from Two Much Fun who had been ashore getting errands done and we three ordered drinks while we waited for Peter to ride in with Bob and Debbie from Fidelity – in their new, large, fast and relatively dry dinghy. Peter from Two Much Fun is EW’s musical mentor in the Caribbean. He’s been incredibly generous with his time and talent and advice, and he was going to perform with EW and with Bob at Open Mic Night.  Bob also performed professionally at one point, plays the guitar and has an excellent singing voice. 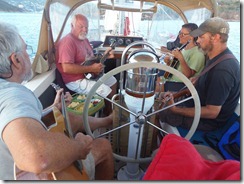 Also joining us, but not performing, were Ben and Pam from Cricket. They had participated in two evening music sessions on La Luna and Two Much Fun and also have outstanding singing voices. 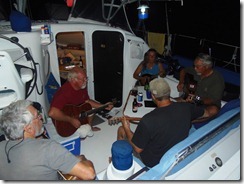 Ben plays guitar and Pam is learning mandolin. They have since left St. Thomas to begin a leisurely cruise back home. We will miss them. As the dinner hour progressed, EW’s groupies straggled in: Jeff and Barb the St. Thomas Harts, and Jenn and Ryan from Sandy Dreams. We were a strong group. 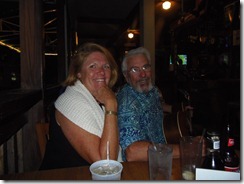 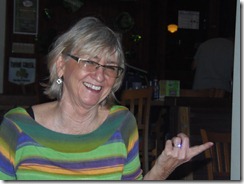 EW and I were delighted to see Kevin Boothby tuning his guitar before the show. Kevin single hands his small cutter, Ruth Avery, sailing her each year from Maine to St. Thomas and back again. We knew he participated in musical evenings, but had missed his performances in Maine. 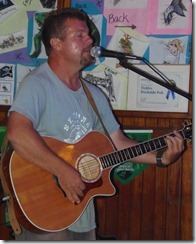 On this evening, he played bass for the house band, and then did a solo set, singing and accompanying himself on the guitar.  I. of course, took a lot of photos. How many, you may ask? Well, I took so many photos of Kevin and then of Peter and Bob, that one couple in the audience asked me whether I was the official photographer.

Not likely. We chatted and I met B.J. Glanville and Tom Brown, who live in Kittery, Maine!

So, Kevin gave an excellent performance. 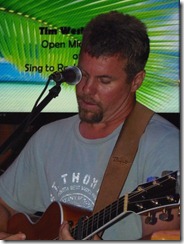 Then, Bob and Peter sang and picked like the professionals they are. 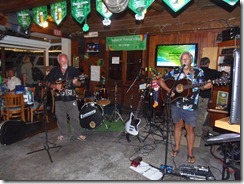 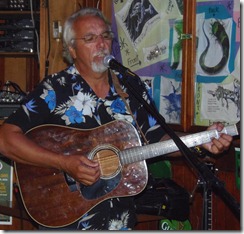 Then, EW stood up and joined Peter on “stage” as Bob returned to the audience. 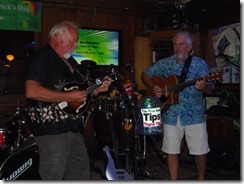 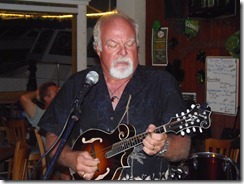 He wasn’t nervous, but it was the first time he’d played in public standing up and the first time he had sung with a microphone. At the last minute, Peter told EW to “eat the mic”, but that’s a difficult thing to remember your first time on stage.

EW did just fine. Unfortunately, the venue didn’t have the amplification mix right, so it was difficult for most of the audience to hear them, and the instruments sounded a bit tinny. 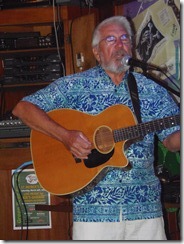 I was so proud of EW. More than anyone  I know, he is always eager to learn new things and try new adventures. He was great. I love that man.

I know inquiring minds will want to know what they played. They started with “Norwegian Wood”, with Peter singing the lead and playing the lead on the mandolin. EW backed him up on the guitar. Then EW sang “Louise” and Peter played lead on the mandolin. They finished their set with “Tico Tico No Fuba”, an instrumental that they both love and that EW has been working on since Grenada. Outstanding. (Follow the link to hear Paco de Lucia play that number.) 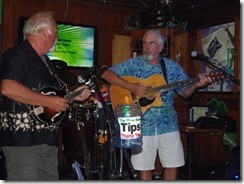 While their extensive fan club was hooting and clapping and congratulating them, the emcee introduced the next act – Tom Brown from Kittery. He performed classic rock numbers and also did Maine proud. 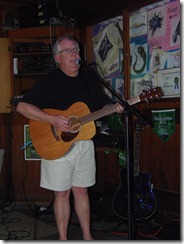 So there were three musicians, thousands of miles across the sea from Maine, performing on the same night at Tickles in St. Thomas. At the same time, the Allure of the Seas was cruising to their next stop, and many of the passengers were enjoying a performance of Chicago with a young man from Maine singing in one of the roles.

NOTE: I’m such a Mainah that for months I thought EW’s favorite instrumental was Tico Tico No Fubar.  In Maine, a word pronounced as fuba, would be spelled fubar. EW set me straight. He has to do that a lot.

Finally, as we were leaving to catch the 9:00 ferry, we saw someone at the bar wearing this shirt. Maine rocks! 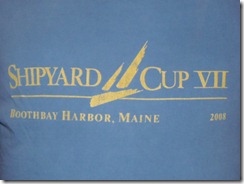 Have you heard? I’ve written a book, currently available on Amazon as a Kindle ebook, for only $2.99.

In Harts at Sea Sailing to Windward I tell the story of our first year as cruisers. I've been told that it hits all the right notes.

STOP THE PRESSES! On Friday and Saturday, March 16 and 17, Harts at Sea Sailing to Windward will be availble on Amazon for FREE! Happy St. Patrick's Day.