We’ve had a busy week – oh jeeze—it’s been nearly two weeks, hasn’t it? Let’s see. We had Christmas (more to come in later posts), then on the 26th we sailed to Culebra to check into Puerto Rico. On the 27th we headed to Fajardo, anchoring off of Isleta Marina as suggested by a bunch of cruisers. “If you are shopping in Fajardo and San Juan,” they all said, “anchor at Isleta Marina and take the ferry to shore.”  We were definitely shopping in Fajardo and San Juan, and planned three days for this chance to shop US stores at US prices. This wasn’t a fun little shopping trip. We had three days to find and purchase items we needed—highest on the list was a new dinghy, followed by clothes for me. 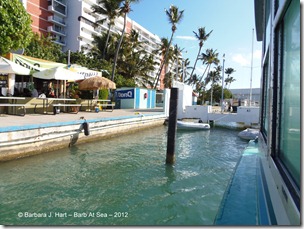 The 28th was West Marine Day, and  we dinghied to Isleta Marina, and met Polito, who has a sailing/racing/charter boat in the marina. This compact and lively seventy-something gentleman speaks accented English in a raspy voice, and is charming. He told us where we could tie the dinghy and complemented us on La Luna. He also had the ferry wait for us while we secured the old grey mare. The ferry is owned by the marina/condo complex, and I assume that condo owners and slip holders take the ferry for free. 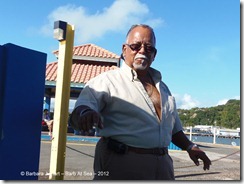 Nevo, the marina dock master, makes the first ferry run from Isleta Marina each day, then stays at the shore dock, taking $5.00 per passenger for the two-way trip. That’s a bargain.

After eating a ton of food over the Christmas holiday, and then not getting off the boat for two days, I convinced EW that we could easily walk to the West Marine store. He participated in this decision, by pulling up a map on the iPhone and showing me that it was only 2.7 KM from the shore. Once we had arrived on the mainland, he said, “Oh, that wasn’t right. I couldn’t get the map to work properly.” Oh. So, EW asked Nevo for directions, explaining we wanted to get some exercise. Nevo told us when to turn left and right, then raised his eyebrows, and said, “You’ll get a walk, all right.” Any other cruising couple would have considered that a clue, but we still remember the many times we were discouraged from walking a mile in the Bahamas.

The actual distance was over four miles, part of which included a mile or so on a limited access road (PR #3) with thankfully a wide breakdown lane. No photos were taken that day because I had the Officiant Bag full of documents and other things. I should have carried the camera and let EW carry the Officiant Bag. Ah well. As EW said, “You wanted a walk. I give you a walk.”  We were a bit nervous about the limited access part, and asked another gentleman for directions. He was very specific, “Take Route 3, and go straight through 6 traffic lights.

You’ll see McDonald’s. West Marine is behind McDonald’s. Six traffic lights didn’t sound too bad. The problem was it was about a mile and a half before the first one. It was an adventure. Here’s a photo taken from the rental the next day. Yep, we walked this.

We made it to West Marine and sought Estella, the Operations Manager for that store. We had shopped at this store in March on our way to the Eastern Caribbean and found the staff to be helpful, but they did not stock a lot of items for larger sailboats. EW had planned wisely for this trip. A month ago, he emailed West Marine a list of items we needed to buy, from a 10-foot hard bottomed inflatable, to a new sailing hat for EW. Estella greeted us with, “Good morning. The last four items arrived today!” Everything was sorted and in a cart, except of course for the dinghy which was in an enormous box.

EW asked whether Estella knew of anyone who could deliver the dinghy for us. She did, and placed a call while we shopped a bit, then suggested that we go have lunch while we wait for the truck. We opted for a quick lunch, planning on dining at the café/bar at Isleta Marina that evening. When we returned to West Marine, a large white pick up, and Lorenz awaited us. EW checked the items off of his list, paid, and helped Lorenz load the dinghy and stuff into the truck. We were joined by a young man from West Marine who came along to help. Lorenz spoke no English and the young man spoke only a bit. First, they took us to the wrong marina, but we figured it out, and Lornez told us, “Don’t worry, be happy!” (That and one other phrase were the only English words we heard him utter.) We relaxed and they found the ferry terminal.

Estella had agreed that the cardboard box for the dinghy could be returned to the store, so our two helpers cut the box apart and we slid the dinghy onto the boat ramp. They took over pumping the dinghy, showing us how to use the foot pump. Since I wasn’t needed, I hopped on the ferry to pick up the old grey mare, the rapidly disintegrating dinghy. When I returned, EW was standing next to a new dinghy, which was loaded with West Marine bags. We launched her, trying desperately not to scratch her pristine bottom, and I towed all back to La Luna, where we opened all our new gear, and got the new Lunah Landah up and running.

We hadn’t rushed that morning, arriving at the ferry around 10 AM. We walked to West Marine, had a quick lunch, purchased thousands of dollars worth of stuff, and were back on board with a fully operational dinghy by 2:30. I call that a good day. 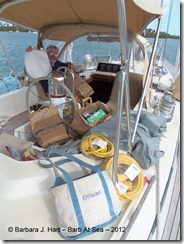 We stowed stuff, moved the motor from the old grey mare to the new Lunah Landah, and went to Isleta Marina to celebrate, and to buy Polito a beer. Two beers all around, we met Israel the owner, and Will – who had gone to high school in Maine! So much fun was had that Israel offered us free shots of a traditional holiday rum drink. It includes cream and cinnamon and goes down very smoothly. Since tomorrow was another day of the buying expedition, we wisely stopped at two shots, paid the bill, and took the new Lunah Landah back to the boat, where we raised her with her new lifting harness. (More about that later.) 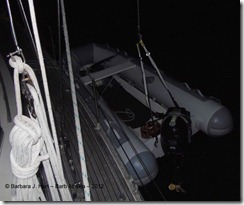 West Marine has no idea that I write this blog (though perhaps they should) and I’ve not received any special pricing or compensation for this post. This was an excellent experience. The customer service crew in the states, and Estella and her team were all helpful, responded to all emails, and made sure we had everything on our list. It was a great experience. I have praised EW repeatedly for doing the work to make that happen. He gets a huge Attaboy for this one.

Day One was complete with all items checked off the list. Including, you will see above left, a toilet seat. Two days left to go.

Here’s EW in his new hat. 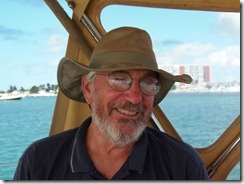 Thanks for writing this, it picks me up while at work, in the winter, in the cold, in Canada, while waiting for summer. I hope to be where you are at some stage, but we're not there yet. I really enjoy the pictures and the reading.
Joan

Thanks, Mike. He's happy. We probably should have gotten a spare! Cheers!

Thank you so much, Joan. I'm delighted to hear you enjoy the blog. We lived in Maine, on board the boat for eight winters. You may get a kick out of the earliest posts here, as they talk about that. Really loving year-round warmth. You'll get here!
I'm rooting for you. I'll answer any questions I can for you.
Barb

I grew up cruising in the same area with my parents on a 40' Moody and delight in reading your posts. My parents actually scouted PR for West Marine before they even had a store there. It's great to hear that you had fabulous service from the staff at the store. Happy West-Marine day! I absolutely LOVE reading about you, EW and your adventures and have read every post since you left Maine.

I am very happy to know your adventure and shopping. you are so Lucy cause very rarer people have to come that time.

You are a Captain, Guide or Angler we hope you can use our site to build your business or create a great memory. To get more information. visit: http://www.CharterAndGuideFishing.com