Home Archives Profile Subscribe
Happy Three Kings! (And a Christmas Recap)
What Are We Doing? We Painted the New Lunah Landah

New Year’s Day, we were on the hook in Fajardo, and still had things to store from the three days of shopping and provisioning. We also spent a lot of time calling folks back home. Our first call set the tone for the day when we discovered that our former neighbor had passed away that morning. We’d been informed that he was terminally ill and had called to chat with him and his wife. My call was answered by their eldest son who seemed stunned that I called and immediately gave the phone to his mom, who broke the news that “The Boss” had died just a few hours before. We all cried. 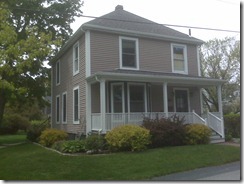 During the second year of our married life, EW and I purchased a real “fixer upper” in South Portland. We shared our back border with these neighbors. A chain link fence, with a chain and padlock on the gate, separated our yards. After meeting us, Billy, our next door neighbor told us that he’d grown up playing with the kids who grew up behind us and that their parents still lived in that home. Billy said that the people who had owned our house had put the chain on the gate to keep Billy and our neighbor’s sister and her family from cutting through the yard. EW immediately unpacked the bolt cutters and cut the chain.

It was the best use of bolt cutters I’ve seen. We were welcomed to the neighborhood by those who had lived there for twenty, forty, and sixty years. Our back neighbor’s wife taught me how to be a “Neighbor Lady”, and her husband, The Boss,a retired arborist, taught EW how to fell a limb without getting killed. He was something. For a year or so after we had moved in, EW thought that The Boss didn’t like him. He liked to tweak a person, and was more quick to tease than to praise. He was a worker, with a good sense of humor, who loved dogs, horses, gardening, and his family. He was a good neighbor.

If we needed something, we could ask The Boss. If he thought we needed to know something, The Boss would tell us before we asked. I was painting our new shed one day while EW was upstairs installing new electrical outlets. (I told you this was a fixer upper.) The Boss came by as I was happily putting the paint away. He noted that I had painted only the outside of the shed double doors but he didn’t say a word to me about it. Instead, he walked into the house, calling for EW. Once he found him, he said, “So, Barbara’s done painting the shed.” “That’s good,” said EW. Then The Boss tattled and said, “She only painted the outside of the doors, you know.”

So EW left his job and walked with The Boss down the stairs to the yard, where EW informed me that I had to paint the interior of the doors, while The Boss laughed. I laughed, too.

One spring I had bought a gardening book and read an article about how to kill grass when you want to create a flower garden in place of a section of lawn. The article talked about using a sheet of plastic, cut in the shape of the new garden, weighting it down with stones, and leaving it for “a couple of weeks”. The grass will die and something good called nematodes will grow/appear/be created. Since this was a home in Maine, I had a blue poly tarp not being used, so I cut that into the desired shape and held it down with bricks. EW had to mow around it. For weeks. The grass wouldn’t die. Finally, The Boss came over and called me out to the front yard. “What in hell do you think you’re doing here?’ I told him. “You dammed fool! You have to use clear plastic so the sun burns the grass and the grass can’t breathe! This tarp has air holes and you have created a grass greenhouse.” He was right. Under the blue poly tarp, that section of lawn had a thick, green carpet of eight-inch tall grass. EW was not happy. That area was mowed and remained lawn.

The Boss loved both of our dogs, and his dog, Nan, was always welcome on our side of the fence. His wife and I both are snake phobic, so when she was home alone and discovered a snake in the basement, EW disposed of it. When EW was gone and I had a snake in the way of the lawnmower, I called The Boss. He took care of it. We had a row of tall pines between the two houses. The Boss and I hated them, but for years, both his wife and EW didn’t want to cut them down. Finally, one Friday afternoon we all came to agreement: EW would attach the  board to our shed to hold the end of their clothes line, which was currently on one of the trees. And then,the trees could come down. The Boss put the call out, and on Saturday morning, he arrived with three of his sons, who all had climbing gear and chain saws. By evening eight thirty-foot pine trees were down. His sons and daughters are workers, too.

We attended their birthday parties, and they came to our Christmas Eve parties. We shared recipes, stories, horse radish, sour dough starter, sugar, plant cuttings, tomatoes, dog toys, mulch, and work. We laughed a lot. We cried when their nephew died and made baked beans for the wake. They hugged me when my folks died, met EW’s mom, and kept an eye on Favorite when he was home alone.

They were the best of neighbors. In 2002, we sold the house and bought a boat and they sold their house and had one built in the country where The Boss could have some animals. When we visited, we met the chickens and walked the horse pasture, admiring his “stock”.

The Boss was the finest kind of Maine man, quiet, sometimes caustic, who showed his caring by his deeds, not by his words. EW’s favorite story happened a year or so after we had moved into the neighborhood, when EW still thought The Boss didn’t like him. A freak wind storm had broken a huge branch that had fallen onto our kitchen roof. EW was going to stay home from work to dispose of the branch; I was sure he’d be injured in the process. We were standing in the yard, discussing the project, when The Boss strode through the gate. “What in hell are you going to do about that?” he said to EW. “I’m just trying to figure it out now,” EW replied. “Well, I can’t climb anymore, but I’ve got the stuff and I know how to use the ropes. I’ll tell you how to do it,” The Boss stated. And he did. He worked with EW all day, until both tree and EW were safely on the ground. He directed EW every step of the way, and EW began to call him “The Boss.”

On New Year’s Day, we cried, then called Billy to talk with him and to catch up on his life. Then we called other friends and family, because it was that kind of day.

This story brings a tear to the eye of one who didn't know The Boss. Thanks for sharing.

A wonderful, wonderful tribute. Thanks for sharing it. Made me cry. -gb

I am sitting here with tears in my eyes Barb. What wonderful things shared about the " Boss" what wonderful neighbors to have enjoyed!

Wait, you bought a boat? That’s classy! What kind of boat is that? Do you still use it? I guess that’s one more thing my family hasn’t tried – buying a boat. I hope my parents consider that, hehe.