(A Day Late. We lost Wi-Fi on Three Kings Day in Culebra, so this didn’t go up as planned. On the Thirteenth Day of Christmas….)

This morning, January 6, I took the new and improved Luna Landah to a nearby dock and walked into town, hoping to find a veggie truck. I’d been told that the prospect was dimmed due to the holiday – Three Kings Day. As is our custom, I cheerfully greeted everyone with a “Buenos Dias”, until I heard them saying “Happy Three Kings!” That is the appropriate greeting for this day – so I corrected my Buenos Dias and kept on my walk.

SIDE NOTE. I come from Maine, where the letter “r” is often silent. Family members call me “Bahb”, sounding much like the way those in Maryland say “Bob”. Here in Puerto Rico the “s” in Buenos Dias is silent. “Bueno Dia” is the standard greeting. I’ve decided to continue with Buenos Dias as I don’t want to sound like a Texan trying to speak like a Mainah. That’s never pretty.

So anyway, what with traveling to Puerto Rico and shopping and stowing and snorkeling (tough life, I know) I have not answered some of your questions about Christmas or updated you about the holiday. Hope you’re not all Christmased out.

Pretty much, yes. (Unfortunately). I hate those inflatable snowmen and santas and yes they have them here. The US Coast Guard base had two set up near a large anchor, but they were always partially inflated (like our old dinghy) and were finally removed. I find it incongruous to see so many decorations that relate to cold and snow-certainly the first Christmas had no snow, but that motif has taken over the season, even in Grenada, St. Thomas, and Puerto Rico. Yes, that is something else that has unfortunately reached the islands, even though we left Grenada a week before Thanksgiving, some stores had already decorated for the holidays, with fake green garland and snowflakes.

Here are photos from St. Thomas and Puerto Rico: 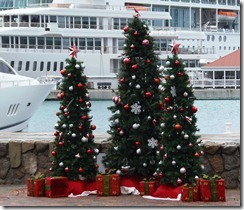 Three Trees at Yacht Haven Grand, with yachts and a cruise ship in the background. 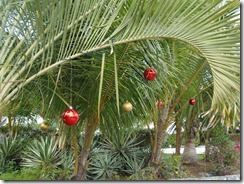 One of my favorite displays, ornaments on a palm tree. 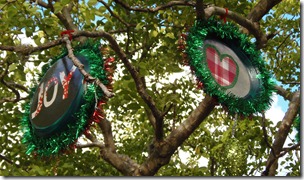 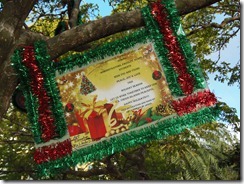 In Emancipation Park in St. Thomas, school classes decorate a tree. I loved that. The children also wear special outfits on Christmas morning. This little girl played with her shoes more than she wore them. Her cousin was hungry. 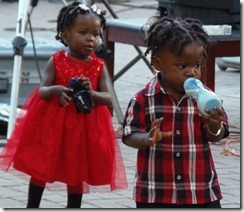 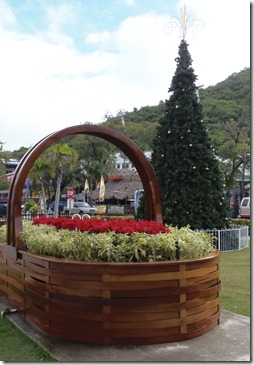 A couple of weeks before Christmas, the Havensight Shopping District had a Christmas Tree Lighting Ceremony to light this tree. The very large basket is planted with poinsettas for the holiday.

EW, Barb H. the First, and I attended the festivities, which included live music at various locations, steel bands, and a parade with both high school bands performing. It was great fun, and very well attended by local folk. We saw no other cruisers at the parade and aren’t sure how many attended the other events that day. It was definitely a highlight of our Christmas in St. Thomas.

While I appreciate the holiday splendor, it’s like gilding the lily down here, where you can see flowers like this along every walk. 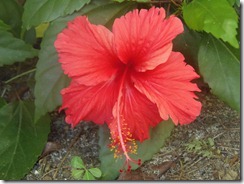 Question from our friends: “Did you decorate the boat this year?”

Absolutely.  Last year, we crossed the Gulf Stream to Bimini on Christmas Day and ran aground. It was not a Merry day and I didn’t get out the stuff. 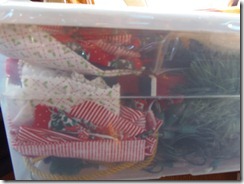 This year, the box came out, the stockings were hung, and EW was instructed that they would be filled. I have a largish plastic shoe box, and can take as many holiday decorations as will fit in the box. It also holds the fabric we use to wrap our gifts, and two strings of lights that we haven’t used yet. Our former tree top angel now perches on a conch shell. 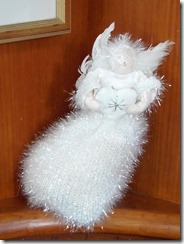 Question from family: “Will you have Christmas with Barb and Jeff?”

Absolutely, and that woman knows how to decorate for the holidays!  Here are a few photos from their lovely home – all duded up for Christmas. 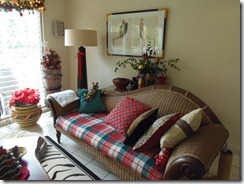 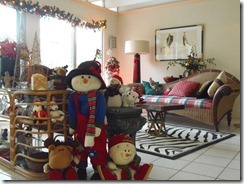 Note that Barb’s from Ontario, so she has the snowman/garland motif down. 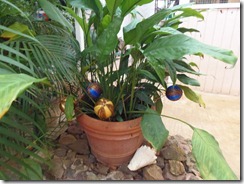 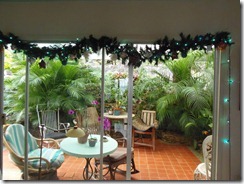 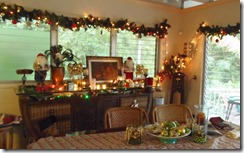 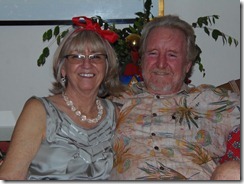 Barb and Jeff got all duded up too… 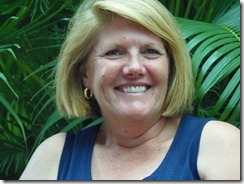 We had a lovely time with their friends on Christmas evening, and ate way too much.

Here’s something no-one asked us? “Will you get up at 5:30 on Christmas morning?”

Proving once again that he is a good sport, EW agreed to go with me to Emancipation Park for the 35th  Challenge of Carols. It began promptly at 6:00 (a miracle in the islands) and lasted until 8:30. Fourteen groups performed, most without accompaniment. They each sang two or three carols, free breakfast was served, and we were both enthralled. It was a magical way to start the day. (I admit, I did bribe EW with the promise of brunch with bacon when we got back to the boat. He actually was delighted with the morning, but I still fed him bacon.) 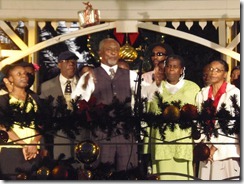 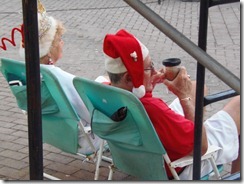 Again, we think we were the only cruisers to attend, but locals and folks who’ve moved here make this a yearly event. 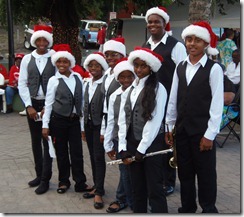 The kids on the right are from the New Music School. I was going for a candid photo while they waited their turn, but one young lady caught me, told the others, and struck a pose. So cute! 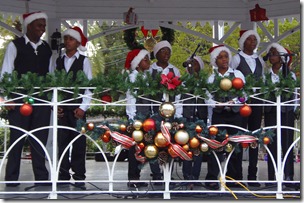 Here they are performing.

Finally, a few photos of the decorations on Culebra. Evidently someone here has talent with a jig saw. Most decorations were flat plywood cut outs, painted very well. I’m not sure about the smurf motif though. 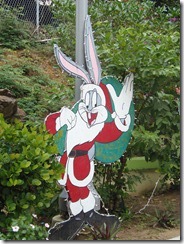 Thanks so much for sharing this...and happy Three Kings to the Harts! Seeing your pic of the kids all dressed up for Christmas reminded me of when we were on St. Croix for Easter many years ago. Everyone was dressed in their most festive outfits, and the singing and music was everywhere! Those islanders know how to celebrate! Keeps those cards & letters coming! Happy New Year!

Thank you, Bob! So glad you enjoy my posts. Those kids were a joy to watch -- I loved that families came to this before presents. What a wonderful tradition.