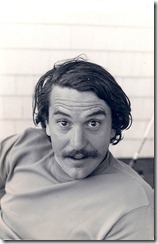 Oh dear. I blame EW – which isn’t fair, because he isn’t blaming me. “I’m not all that vain, you know.” he said when he first saw the cut.

Back in Fajardo on the big shopping trip, EW roamed the aisles of Bloomington Coat Factory while I tried on swimsuits, shorts, tops, bras, and capris. I was having a wonderful time – so was EW.  Every so often, he’d find me back by the changing rooms and say, “Look what I’ve got!” waving his latest bargain find. Some of those items weren’t needed, but he was sure that the electric hair trimmer would be just the thing to help me cut his hair. Having cut his hair with hair-cutting scissors back in the Bahamas last spring, I wasn’t sure I wanted another go at it.

Below, right: EW and me at the wonderful Malon/Klein hosted Anniversary/Bon Voyage party. EW has beautiful hair. I love running my fingers through it. It’s thick and has a wave, and when he had it cut by Rey, back in Portland, it just looked wonderful. When we first went to sea, he planned to grow it out and have a pony tail. I heartedly approved, imagining a silver mane on my sliver fox (how’s that for mixing metaphors?). By the Bahamas, neither of us liked his long hair. It never made it to pony-tail length, was straighter the longer it got and the length bothered him. We went to shore and I gave him a haircut.

For the rest of the year, he would let it grow to unruly and find a barber, and he grew a beard instead of hair. He had been getting his beard trimmed by the barbers, as well, but had also bought a beard trimmer in Fajardo,. Once he found the hair trimmer, he decided he wouldn’t have to go to a barber again.

Two days ago, we gathered the implements and directions and moved to the back deck. I set the hair trimmer to the longest setting possible and began in the back. Mmmm. Looked good. Short though. So I decided to use the scissors for the top and try to incorporate a longer top into the short back. Mmmmm. (We did not have a mirror on the back deck. Poor EW.)

At one point he caught my look, “Was that a grimace?” he asked, clearly hoping I had a piece of hair in my eye. “Um, yes.” This isn’t going real well,” I said. I kept at it, but finally he said, “Just use the trimmer on the whole head. I don’t care.” Well I did. I want hair on my husband’s head. Did you know he has a whole bunch of weird cowlicks? I found and activated all of them. I used the trimmer and grimaced again. Then we gathered the tools and he went down to check out the results and forgave me instantly.

He isn’t vain, and he doesn’t have to look at himself, but I sit across from him at every meal. Yesterday, I was looking at him and trying to figure out how I could learn to cut his hair. The top is too long to go with the sides – but I don’t want them shorter. Perhaps I could learn how it grows and how best to cut it if I “monitored” the situation over the next month or two.  I thought about it and said, “You know, maybe I’ll just trim your hair every two weeks for a while.”

I cannot describe the look of horror on his face.

After we stopped laughing, I explained my theory and he agreed.

EW is certainly a good sport. NOTE: As I write this, we are keeping ourselves busy until Favorite’s plane lands this afternoon. Our favorite (and only) son is coming for a visit. He inherited his mother’s gorgeous dark curly hair – but frequently opts for buzz cuts to avoid “hat head”.

I wonder what he’ll think of his dad’s hair cut.

I love this as I am Licensed Cosmetologist. Know what I will be doing to help everyone out....:)

We need folks like you down here! I have been getting my hair cut with LeeAnn on Too Much Fun, who sold her salon to go cruising. EW wanted to go the do it yourself route... once. I have retired.

Hi michelle can you please tell us how can you help us?

You mean with the thinning hair issue? I can offer tips?

I found your blog on google and read a few of your other posts. I just added you to my Google News Reader. Keep up the great work Look forward to reading more from you in the future.