Home Archives Profile Subscribe
Harts at Sea, Barb at Sea, and The eBook
View from the Deck 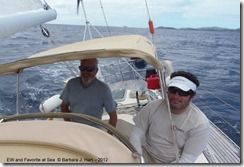 Favorite has traveled the world as a racing sailor but had never been to the Virgin Islands and so had never seen his Uncle Jeff’s and Aunt Barbara’s home. We were all thrilled.

He arrived on Sunday, and we were all graciously hosted by Barb and Jeff and the NFL – though Favorite, tired from Key West racing and partying, slept through much of the evening. He also slept until 11:00 AM on Monday, which was strangely reminiscent of his teen years with us in South Portland.

We visited Jeff’s shop in Red Hook, went to movie night on Honeymoon Beach, and set off on Tuesday for three quiet days on St. John. We sailed, and Mo handled the sheets. He was politely adamant about doing all the heavy lifting. At one point I looked at EW and said, “Wow. It’s really great to have our own deck ape!” EW laughed and later said that was one of his favorite lines from the week.

NOTE: In racing, we have always called the strong sheet handlers “deck apes” and those who merely sit “rail meat”. Back in Maine we once invited our dear friend Lynnelle on La Luna’s only race and told her she’d be rail meat. When she told her mom she was racing a sailboat, her mom expressed concern that Lynnelle didn’t know what she was supposed to do. “Don’t worry, Mom. I’m just rail meat,” Lynnelle explained. “Lynnelle Lynn! That just sounds nasty!” her mother scolded in her Dallas accent. Since then, “That just sounds nasty!” is one of our favorite phrases.

Favorite was happily appalled by EW’s hair cut, and made numerous comments, including: “You know, the photo on Facebook didn’t do it justice. None of your followers know how bad this haircut is.”

Thanks, kid. He also offered to “fix” it and suggested that his dad keep a hat on. For weeks.

After a brisk sail up wind, on Tuesday, we took a National Park mooring in Great Lameshur Bay on St. John and relaxed. I made cookies. We taught Favorite to play Mexican Train Dominoes, Trini Version. He beat us so badly the first night that he believed his programming mind “It’s all ones and zeros, Bubsie,” was the reason for his success.

We got our revenge on subsequent nights. Ones and zeros my sitbone. We didn’t do much snorkeling. EW had bounced his head off of the boom (while we were on the mooring – a d’uh moment) and had cut his cheek with his glasses right where his mask would sit. Favorite had cut his foot in Key West and found the fins aggravated him, even with socks. I snorkeled a bit on my own, happy to be in the water. 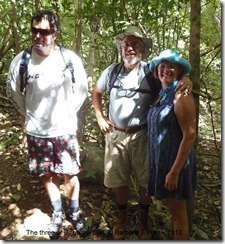 On Wednesday we hiked six miles out and back along a wonderfully groomed trail to see the petroglyphs and ruins of a sugar mill. The next day, EW and I were delighted to hear boating friends from Grenada on the VHF. These three boats are slowly making their way from Grenada back to the states. That evening we were invited aboard m/v Finally Fun for cocktail hour with them, and the crews from s/v Soulmate and s/v Sabbaticus – and I was delighted to have Favorite meet some of our Grenada friends and to see that part of our cruising life.

He enjoyed it all.

At one point, we were discussing family history. When Favorite was in high school I had a Mazda 626, four door, five speed. It was a nice car, and we had known back then that he and his friends thought of it as a sports car. That issue had been discussed, I assure you. Even so, Mo laughed as he told us that the car had a “governor”  on it. I naively asked how he had discovered it and he replied, “Because I couldn’t get it above a hundred and four.”

Oh.  I let him drive that car quite a bit.

We laughed. We hugged. We played spirited and cut throat games of dominoes. We ate. We all shared stories new and old. 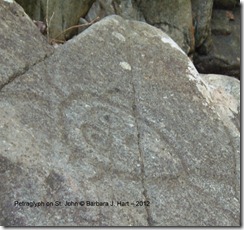 On Friday, we left St. John for a downwind sail back to St. Thomas. EW had realized that the furling system for our main was binding up, and Favorite thought it needed attention. So they lowered the main upon our return to St. Thomas, and removed the boom and system once we were on anchor. All of those tasks were made much easier because Favorite provided able and knowledgeable help. (Back to loving having a deck ape.)

EW and I had invited Jeff and Barb to join us (and drive us) for dinner at Island View. We laughed and told more stories – including the time Favorite was tortured by his dad and Jeff. It involves a long trip in the back seat of a Z –210. He hasn’t been able to let that go. It’s a sad tale. EW and Jeff showed no remorse. Poor Favorite. Despite this episode of child abuse, Favorite did an end run around his father and treated the five of us to dinner. 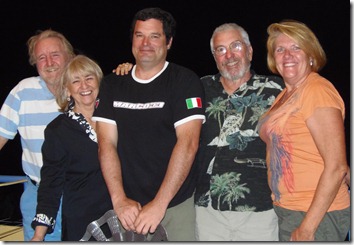 Life is good. We are blessed.

ONE MORE THING:  Shortly after Favorite arrived, I was taking yet another photo, and he asked, “Do you take photos all the time?” EW rolled his eyes. Favorite answered himself, “Oh yeah. I get it,” and gave his father the look. That look can mean many things, but it often does, and did, mean: poor Dad.

I told Favorite I’d be writing about his visit and that he could veto anything he found too revealing or objectionable. But I didn’t write while he was here. Too bad.

One hundred and four miles per hour!

Car is not a luxury anymore it is a necessity and when you own one, you should know the ins and outs, you should also know how to repair it therefore by reading such articles you will get good awareness about the automobile industry.