Yes! We Have No Short Pants in St. Thomas

View from the deck: 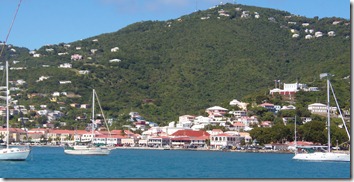 From the website of Villa Papillion in St. Thomas:

Weather and Average Temperatures in the Virgin Islands

The Virgin Islands is just about perfect year round making it an ideal vacation location. Temperatures from December through February are in the high 70 degree Fahrenheit, while the summer months (June, July, August) reach temperatures in the mid-80s.

Water Temperatures in the Virgin Islands

I used to love autumn. I loved wearing layers, and getting out the fall clothing. Now I am in the land of summer and hot summer. Hot summer is in Grenada where my chin sweated—daily, when I was sitting in the shade. Summer is a Virgin Islands winter, where it is still shorts weather (according to sailors) but not oppressive.

This is important, because our “summer” clothing has taken a beating, and compared to me, EW is a fashion plate. We both have ruined and stained clothing in the past six months. After all, we (well one of us) came down with a much reduced wardrobe and we’re wearing that wardrobe 365 days a year. EW ruined a couple of pairs of shorts and along the way (remember that rusty dinghy chain?) but he also had found some excellent shorts on sale in Freeport and had left Maine with three pairs of swim trunks and six pairs of shorts. Plus, he has found replacement shorts in the islands. I left Maine with only one pair of shorts, two skorts, and four pairs of capris. Skorts work great on the boat and in the towns – but you can’t buy them here; the capris I brought with me are too heavy for this climate. I need replacement shorts and I need them now.

So can anyone tell me why there isn’t a store in the Caribbean that sells normal shorts for women? By the way, the locals here in St. Thomas call them “short pants”, not shorts, but it doesn’t matter what they call them, they don’t have them to sell. EW and I made a trip to the two malls where we both found reasonably priced, light weight t-shirts, and where he could have purchased a number of styles of short pants and swim trunks. We also shopped (or window shopped) in most of the stores visited by folks from cruise ships. Again, there are great styles for men available but evidently women from cruise ships purchase cheap cover-ups and sun dresses, or expensive resort wear. Now that it’s officially “winter” in St. Thomas, the local ladies are wearing slacks and jeans, and the only short pants available in stores are for the (much) younger set. We called them “hot pants” when I was in the (much) younger set. I no longer wear hot pants.

If you are planning to sail south – purchase your shorts and skorts in the states before you leave, I haven’t found any reasonably priced women’s short pants in all of the Caribbean. However, I could have purchased this lovely item in K-Mart. 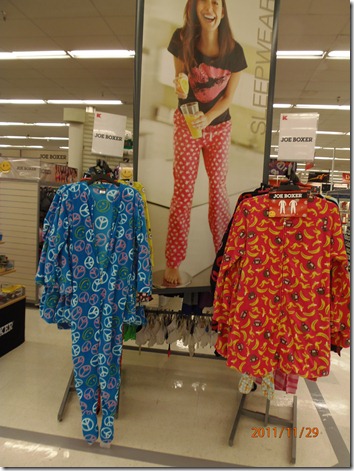 Really. We still aren’t using a top sheet and keep a small fan going all night. What kind of person would wear this in the Caribbean? This is just wrong.

I do have a new pair of shorts though. I purchased them in “Bernie’s Treasures” a cute little store near Yacht Haven Grand. Bernie has been in business for years. She doesn’t sell short pants for women, but she has a men’s style that she recommends. They fit fine, and aren’t frayed or stained. We plan to do more clothing shopping (especially for me) in Puerto Rico, but I’m afraid I’ll still be in the wrong season. At least we’re in the US – can you say on-line shopping? What this island needs is a store for real people.  I’m a real people and I know.  We have cruising friends who have found work here for the season, both in the marine industry and both are supposed to wear sturdy shorts in khaki or navy. One of them told her boss that she can’t find any shorts on the island. “I know,” said the boss. “That’s why I purchase all of my on-line.”

Addendum: The high-end stores here are hurting this season, and are blaming the economy, but I think they 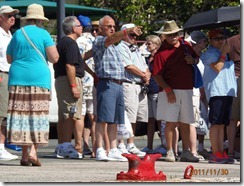 have the wrong merchandise for the market. Most cruise ships lines are selling volume, fun, and parties, not high-end glamor. The folks we’ve seen off the ships are certainly not going to spend $20,000 for gold jewelry, and if they purchase an up-scale sequined dress, they’ll probably wear it where it doesn’t belong. (After all, these are people who shop in Charlotte Amalie wearing white capris and bikini tops.)  My snark is showing. While there are a number of (unfortunately) American cruise ship tourists who appear in public dressed incredibly inappropriately, most of them look like this (though many are younger.) 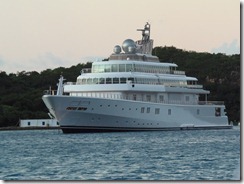 Now, there are folks down here who can--and probably do—purchase $20,000 gold jewelry.

They have second or third homes here, or visit the island in one of these … and they dress like this.

Check out his shiny, expensive business loafers with his nifty shorts. This man is not a cruising sailor. At least he’s not wearing socks.