So there I was, working on the boat, crossing things off of today’s list, nose to the grindstone, and fingers on the keyboard, when EW said – that’s a marching band.

My ears perked up just as Jake’s would when we said, “Cookie”.

I’d heard drum music, but thought it was probably the Kon Tiki, a party barge that will motor past us with a steel band on deck. I scrambled up the companion way, looked towards the town and saw a parade. Two minutes later I was in the dinghy with my camera. I love parades, the beat of the drums, seventy-six trombones, John Philips Susa, majorettes, dance teams, antique cars, floats—I love them all. Some day I want to be on a committee to plan a parade. (I have a friend who did that in Portland for years. It’s a lot of work and requires an attention to detail that I may not possess, but I could help.)

We had been to town last night for the lighted boat parade and “Miracle on Main Street”, an annual holiday event in Charlotte Amalie. These type of events delight me. Just like Carnival in Grenada, they are created for and by the locals, and we visitors are in the minority but warmly welcomed. So, I pumped out Lunah Landah, and motored as quickly as possible in old grey ghost (she’s on her last tubes) to tie up along the sidewalk as the parade passed me by. (Chrissy, did you catch that one?)

No worries, it was a short parade and made frequent stops to entertain folks along the route. The parade was led by the Charlotte Amalie High School Jr. ROTC corps, who were followed by their excellent marching band. We had seen these kids perform during the Christmas Tree lighting celebration at Havensight, and I had congratulated their leader. The band and marching units obviously work hard, but they just as obviously love participating. They marched, the drum section played different cadences, the band played a number of songs, and they entertained us all with their moves and smiles.

The band was followed by the Ivanna Eudora Kean High School ROTC, who have outstanding uniforms and march with precision and pride. In addition, there two baton schools were represented with twirlers from four to high school in both groups. A proud mom told me that there was a sports event at the stadium today, featuring “all kinds of sports”, and some of the young athletes walked along in the parade. Bringing up the rear, six classic VW’s. Jeff had told us he’d seen an antique VW rally on the island. Evidently there is a club here with old and very old “bugs’.

No floats, but it was a good parade anyway. That street is four lanes wide, and the police had simply led the parade down the left lanes, allowing vehicular traffic going in the other direction. I chuckled as tourists in open taxis took photos of the parade as they slowly motored west as the parade moved east. I took a few photos myself. Enjoy! 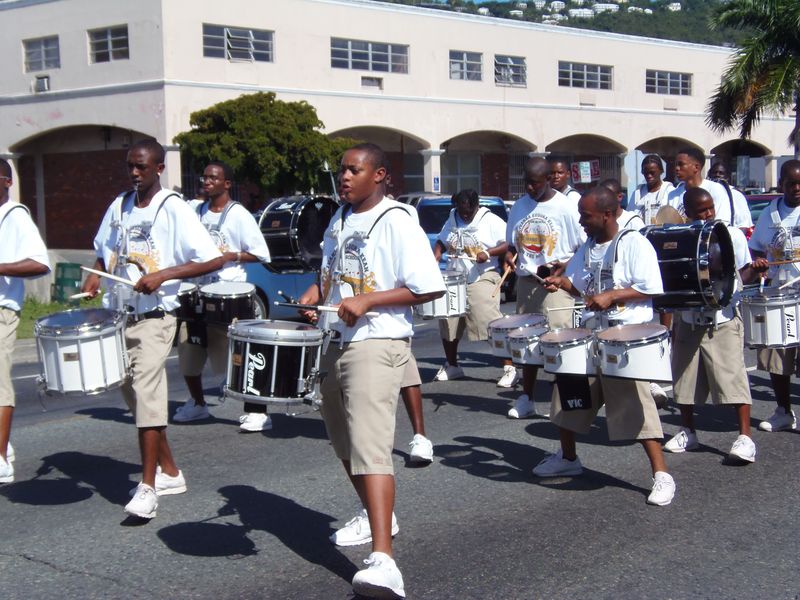 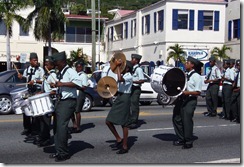 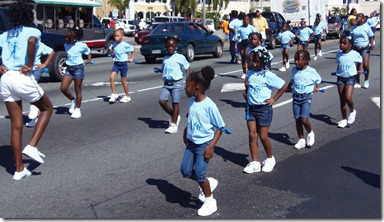 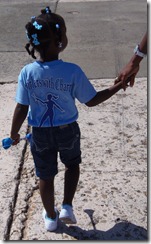 Here are some of the “blue” group in action .. and here’s one of the youngest who got tired and opted to walk with Mommy. 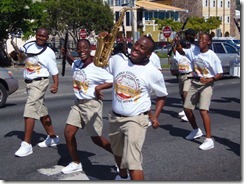 These kids are having a ball! 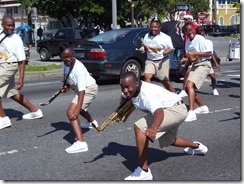 The young man with the sax at the forefront was directed to start the dance by one of the two drum majors. 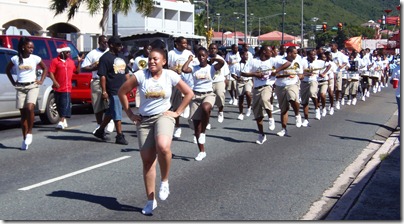 Here is much of the band, stepping out before starting a new song. 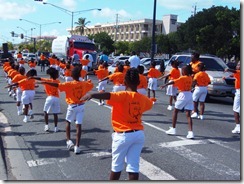 The back of the orange shirts say, “Love It, Do It, Twirl It!” 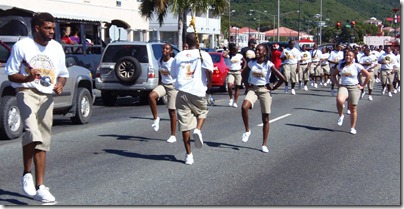 EW was very interested in the green bug on the left with the split rear windshield.

I walked back and forth along the route, taking photos, trying out the video option on my camera and simply enjoying the moment. The mom who told me about the sports event saw me again and asked, “Are you having fun?”

Before the paraaaaaaade passes by! Thanks for the shout out:) hehe. It sounds like you guys had a great time. I love parades too. I hope you had a wonderful Christmas! We miss and love you both!

Yes! I wish they can pass by our area.