We have ordered a new dinghy from West Marine. It’s not likely to be in stock in time for us to get to Puerto Rico, shop, and be back for Christmas, so it will be a New Year’s dinghy. In the meantime, EW has tried twice to repair the new leak in the inflatable floor.

Yesterday, I was not the image of Patience as I waited for the repair to cure so I could go ashore to take photos. In truth, it was time to be off the boat by myself for a bit. EW and I had begun to fall into the old anti-communication habits and we needed a break. He was a bit short with me, I was a bit impatient and short with him, and neither of us was fully listening to the other. That means it’s time for a solo excursion ashore. I was ready.

Well, I thought I was ready.

EW decided that the floor needed more time, and agreed that I could take the dinghy in without the floor. He did ask me to use two area rugs and the yoga mat to protect the bottom of the dinghy (and help to keep me out of the water). So I loaded those into the dinghy, strapped on my camera and jumped aboard. Now that we attach the dinghy safety key to the key for the security locks, I never forget the safety key--without which the motor won’t start—so I jumped in and started her up. EW obligingly untied the dinghy and handed off the line and I headed for shore.

Tum, dee, dum. I’m going to shore. And the motor died. It sputtered, I looked back at it as it stopped and …..  I discovered I’d forgotten to load the gas tank into the dinghy.  Of course, it was out because EW had to take everything out in order to remove the floor. I knew that. So, there I was drifting toward the sea with no gas, no gas tank, and no oars. The seat is broken and we only have one oar, so why take oars?

Dumb and Dumber. I let myself drift (like I had a choice) until the dinghy neared a mooring ball, and then I secured the camera, leaned over the bow, and paddled like hell for the mooring. Having tied on, I waited. A short while later a sailboat came into the mooring field, and I thought they were heading for “my” mooring. I called to them, and they pointed beyond me. The woman called back, “Do you need help?”

“Yes, please. My motor died and I’d like a tow to our boat.”

Pointing to her companion, she said, "He’ll be over as soon as we tie on.”

They nosed up to a small sailboat on a mooring and the man jumped into the dinghy to attach their boat to that one, leaving two on the mooring. Then he came over to me. Now, it’s telling that I have few photos of this debacle. I know I take a plethora of photos for any of EW’s “adventures”, but the bottom of the dinghy is wet, and it’s bouncy, and I didn’t want to get the new camera out of its safe bag. Imagine an older gentleman in white shirt and white shorts, driving a large, older inflatable. He deftly secures my dinghy painter to the stern of his boat and asks me to point out La Luna. I did and he turned toward my home. No other words passed between us.

As we neared our boat, I called out to EW who appeared in the cockpit. One glance and his face fell. I knew he believed that he’d have to tackle “Another” Project, but I had no intention of easing his mind in the presence of the kind stranger. “What happened?” called EW. The stranger was facing forward, and I was still behind him, so I put my finger to my lips in the “shhh” sign and EW (amazingly) stopped talking. He took my line and we both thanked the nice stranger, who immediately went back to the two boats.

There I was, sitting in a bouncy, damp, bottomless dinghy, and I looked up to EW who was standing on La Luna’s deck. “I forgot the gas tank.”

Once he stopped laughing and could form words, EW said, “You better blog this!”

If the situation had been reversed, I wouldn’t have let EW out of the dinghy until I’d snapped his photo. Unfortunately for him – but fortunately for me—he doesn’t think like that. (Poor EW.) 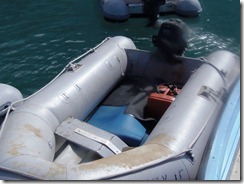 Here’s a photo of the dinghy taken after I finally made it to shore. Imagine the red gas tank gone, and you’ll see how I set off the first time.

Posted at 02:08 PM in Boat Projects, Maintenance, and Parts, Living Aboard, Relationships at Sea | Permalink | Comments (0)