Home Archives Profile Subscribe
Another Trip Around the Sun
Back in the USVI!

When a VHF Net Goes Bad or Garbage In-Garbage Out

The other day I had a conversation with a woman who mentioned that she felt there was a lot of “childish” behavior on the Grenada Cruisers Hailing Frequency, Channel 68.

I hadn’t thought much about it, but she’s right, and most of that behavior can’t be attributed to the children on the boats. I’m not talking about the delightful fun on Halloween when the children aboard in Hartman Bay traveled from boat to boat Trick or Treating. The cruisers really got into the “spirit” of things, many took a trek to town for goodies and some dressed up in costume. On channel 68 during the witching hour from five to six, we heard a number of screams and spooky laughs. We smiled at every deep-voiced “Bwaaaawaaaa”.

The childish part that irks me are those anonymous complainers and curmudgeons who feel compelled to broadcast their displeasure (and their supposed superiority) without identifying themselves. Be warned, if you tick me off and I know who you are, I will answer with your boat name. I’m often wrong, but I’m wrong out loud, and accept responsibility for it. I make apologies when they are warranted. I do not take well to anonymous criticism.

A bit over a week ago we moved from Prickly Bay to Clarks Court Bay. In Prickly Bay, we were invited to leave our garbage in the containers at Spice Island Marine, a service for which we were extremely grateful. While in that garbage-convenient anchorage, we grew used to hearing this broadcast on Sunday mornings around eight: “For those of you in Mt. Hartman, Raymond is in the area to take your garbage.”

Now garbage is an issue on these islands, as you can imagine. In every anchorage, we’ve made sure to confirm the appropriate place and method for disposing of our waste, The French islands have a recycling program and  when there we separate our the tins, glass, and plastics. Some of the other islands have separate bins for cardboard. We ask, and we comply. Before we moved to Clarks Court Bay, we had talked with a cruiser who has been here for years who pointed out Raymond one day. “He’s the guy with the garbage business in Clarks Court and Mt. Hartman. I suggested he provide this service.” I asked, “So he takes it to the dump, or makes sure it goes to there?” and was assured that Raymond handled it correctly.

So, when in Rome … on the first Sunday after we anchored in Clarks Court, I eagerly awaited the announcement that Raymond was in the anchorage. My bagged garbage reposed on the back deck. My $3.00 EC was in hand, and I waved Raymond and his helper down as they came by. There aren’t a lot of opportunities for entrepreneurship in Grenada, but there are a lot of canny self-employed people who provide good services to the cruisers. Whenever possible, EW and I support local businesses and service providers. On my second Sunday in Clarks Court Bay, I again waited on deck with my bag of garbage and money, flagging Raymond down, gently tossing my garbage onto the pile and handing him the money. I thanked him and wished him a good week.

Ten minutes later came a broadcast on VHF 68, “Those of you who just gave your garbage to the man in the red dinghy. He has taken it ashore south of the blue steamer and tossed it into the Mangroves.” That would be a bad thing, and that started the conversation on the net. Full disclosure: The gentleman who made that anonymous broadcast is a friend, and EW was actually on his boat at the time. EW had seen it as well. Folks came on the net to question whether we were talking about the same garbage guy, as Raymond pilots a small, brightly painted local workboat, not a dinghy. Others defended Raymond, without actual knowledge of what does happen to the garbage. One person came on, unidentified, and commented on people who were “too lazy” to deal with their garbage properly.

That just ticked me off. We all have some one thing in our core that defines us or our background. For me, that thing is a work ethic. My dad was a sweet man, who rarely judged others, but he had no patience for lazy people. On the other hand, there could be no higher praise from him than, “He’s a workah.” He would sometimes use it as a qualifier, “She sure talks a lot, but she’s a workah.” (Believe it or not, that wasn’t said about me – but it could have been.) Now, I may not be the best housekeeper, and I have been known to serve popcorn for supper, but I, too, am a “workah”. All of my siblings are as well, and I married a “workah”. If you’re going to call me lazy, you’d better do so to my face, or at least identify yourself.

I reached for the VHF mic and broadcast: “This is La Luna. I think we should discuss the garbage issue and suggest we all go to 67, including the anonymous person who thinks I’m lazy.”  I clicked over, as did a number of others, including our friend, Tony, who had started this. We all expressed opinions, and ideas. Many supported Raymond as a local man who they wanted to recommend. Others told us of alternative and appropriate ways to dispose of the garbage here. I listened to all, commented on some, and made sure to ask Tony of Ragin’ Cajun to clarify exactly what he’d seen, taking away his anonymity. (Tony is an Australian, with a distinctive voice, who has ably run the Cruisers’ net. He wasn’t really anonymous. He also later apologized to me for not identifying himself during his initial broadcast.)  After everything had been said two or three times, we all agreed to find out for sure what happens to the garbage left with Raymond. We’re going to check, talk with Raymond, and go  to the beach where he unloaded it to make sure it isn’t simply left there to rot. None of us want to prevent someone from making money by providing a service, as long as he disposes of the garbage properly.

On the Monday Cruisers’ Net, Tony stated that he’d gone to the shore where he’d seen Raymond take his garbage and had found that it is left in a large pile, under a tarp. After some weeks, it is taken away by truck, but the opened bags are not cleaned up. As you can imagine, plastic bags of garbage are inviting to dogs, birds, and wild animals. I imagine many bags are broken open over the course of one week.  Being curious and an interested party, I took the dinghy to shore on Monday and took this photo: 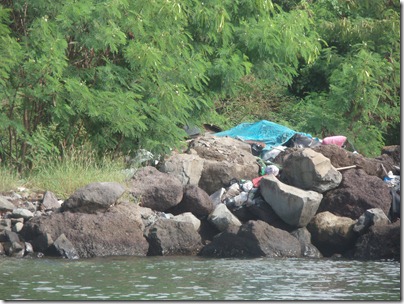 That isn’t acceptable to me. As I write this, I don’t know of any other cruisers who’ve checked out the site, but I do know that there are cruisers who’ve known Raymond for a few years and who plan to talk with him. One has said he’d like to see if they can help Raymond retain his business, and handle the garbage more correctly. I hope they can.

In the  meantime, when in Clarks Court Bay, we’ll be taking our garbage to shore at Island View. It’s a short walk up to the main road where I’ve been told by a in the nearby convenience store that we can just leave tied bags next to others on the curb on Tuesday mornings.

As for childish behavior on the radio. There has been one cruiser, in particular, who has abused the radio, threatened cruisers on air and in person. That isn’t childish behavior; that’s rude bordering on abusive. But those folks who sit back, and make snarky anonymous comments are behaving childishly. They remind me of Jr. High School – and I pretty much hated Jr. High.

You go girl! Good for you! Well said!! Sharon aboard Finally Fun in PLM

Some follow up on the garbage situation!
Spoke with Raymond on Sunday, and he said that the garbage left there was NOT his norm. The guy with the truck couldn't make it for the usual Sunday pick up. The garbage was eventually trucked away.

He has now set it up to meet the truck at Clarks Court Bay Marina to avoid anymore confrontations or problems with the business owner on the other side of the bay.

Love your sailing blog. Keep it up. Found you on stumble upon