It’s not my fault, but I saw it coming.

In the Spice Islands we have found excellent locally grown fruits and vegetables. Many, like callaloo are new to us. They have fertile soil here, a favorable climate, and green thumbs. Of course many locals have mango, lime, orange, lemon, banana, and coconut trees in their yards. The mango trees bear fruit twice a year, and others like bananas and coconuts seem to bear year round.

We’ve stayed in Grenada into citrus season, and I’m delighted. While we’ve been able to purchase limes all year, we hadn’t seen a lemon in months. Now they are available everywhere, as are different varieties of limes and oranges, and the sweetest white grapefruit we’ve ever tasted. These are fruits unaltered by genetic engineering, so they have seeds--and  a lot of them, and they don’t look like the fruit back home. One morning, EW ate breakfast while I was at yoga, but left his grapefruit plate on the counter displaying all of the seeds he’d removed. There were at least thirty.

There are varieties of bananas, including the small, sweet fig bananas and some green ones used just for cooking. There are plantains and something that is neither a plantain nor a banana. There are a number of fruits called apple or with apple in the name, but they are nothing like any apple we’ve ever had. There are melons, papayas, star (or five-fingered) fruit, and sour cherries with three pits.  Juice is a specialty here, and we’ve enjoyed the juices the locals make from any of the local fruits. The grocery stores don’t have excellent produce departments, so it’s best to purchase from a  vendor, and you can find them selling in the market, in private stalls along the road, or from trucks and vans. They all take pride in their wares and will gladly tell you how to prepare and eat anything they sell.

One day, I returned from visiting the Veggie Van, which Cecil and Rosie drive to the different harbors two days a week.When I got back on board,  I interrupted EW’s reading and pointed out the citrus fruits. “This large one, of course, is a grapefruit.” 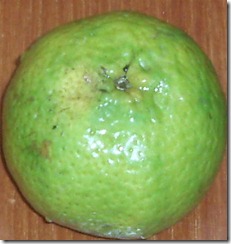 “Well I know that,” he said, clearly not sure why I was wasting his time.

I held up a small bright green fruit. “This is a mandarin orange,” I said.

“I know. That’s why we’re doing this. This large lumpy one is a lemon.”

Yes, really. “You got this, or do you want me to go over it again?”

He was slightly insulted or distracted or uninterested, but I’d done my duty as chief provisioner and stowed the citrus in the net over the fridge.

A few days later, I returned 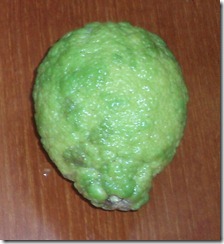 from yoga to find  three quarters of a cut citrus fruit in a bowl on the counter and an EW who wanted another lesson. “Can you go over those with me again?”

I smiled. “What happened?”

I saw the train wreck coming down the track. EW relishes a juicy orange. Once cut into quarters, he uses both thumbs to peel back the pointy ends of the quarter, clamps his teeth around the flesh, and takes it all in, savoring the sweet juice. But this time his orange was a lemon, and there was no sweet juice. He scrunched up his face as he told the tale. “Blech! That was a rude awakening. Took me a while to get over it.”

It took me a while to stop laughing. 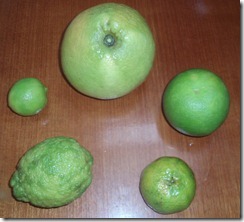 The first photo is an orange. It’s a larger one than the ones I had purchased the first time. The second photo is of a lemon. In the group photo, the grapefruit is a twelve and going clockwise we have a sweet orange, a mandarin orange, a lime, and a lemon.

Among the cruisers there is an “urban legend” often repeated that claims the color of fruit in the states is due to chemicals applied by the growers. According to Wikipedia, citrus fruits turn colors only in areas where there are cooler winters.

The colour (sic) of citrus fruits only develops in climates with a (diurnal) cool winter. In tropical regions with no winter at all, citrus fruits remain green until maturity, hence the tropical "green oranges". The Persian Lime in particular is extremely sensitive to cool conditions, thus it is not usually exposed to cool enough conditions to develop a mature colour. (sic) If they are left in a cool place over winter, the fruits will change colour (sic) to yellow.

Very interesting Barb, now I want a jucicy something my mouth is watering. Oh and Ava's favorite knock knock joke is " knock knock, who's there? Banana, banana who? Knock knock who's there? Orange you glad I didn't say Banana. The way she says Orange makes the whole joke. Enjoy your freash fruit!

Ok, I settled for some fresh Apple cider.

Great post! I can only imagine EW dismay! lol