Home Archives Profile Subscribe
Back in the USVI!
Thankful Every Day

In Which We Remember How To Sail

On my second night watch after leaving Grenada, I checked the sky noting the stars and occasional puffy clouds. The night before I’d finally had the opportunity to track squalls on the radar, watching the green blobs pass ahead or behind us, knowing that we would not experience the wind or the rain this time . When EW had helped friends sail from the Canaries to the Azores a number of years ago, he had described watching squalls, knowing when to reduce sail, or steering around them, all based on images on the radar screen.

We did that on the trip from Grenada to St. Thomas and it’s fun. Chris Parker, weather guru,  had predicted squalls, saying that some would be simple rain storms, and others would have winds to 30 or 35 knots. We prefer to be prepared for strong wind and so were watching for squalls, as well as ships, when we checked radar on the quarter hour. On the first night, EW saw a squall coming during our change of watch, so he showed me how to track it.

During my midnight to three watch on the second night I looked forward and saw towering clouds marching from mostly west to mostly east a mile or so ahead of La Luna. Nothing showed up on the radar, and the clouds were high above the ocean, with clear skies beyond;. As we drew closer, I was reminded of the bridges in Nassau. These clouds were light and puffy white, towering into the sky, similar to lacy bridgework. The dense, darker bottom appeared to be the solid underpinning of the road way. Would we hit? If so, instead of damaging the boat, would our mast open a joint and cause it to rain?

We had a brilliant half moon for the three nights, and I could clearly see the ocean chop under the cloud and beyond it. There was no storm here. La Luna drew closer to the towering cloud as I continued to scan the horizon, then focus on the view above: mast, dark moist cloud base, towering white mountains, topped by clear starry sky. This is why we travel on a sailboat.

Before leaving Grenada we had joked about whether we would remember how to sail. Perhaps those folks who were sailing a day-hop to Carriacou had the right idea, taking a day to get back in the saddle, so to speak. We opted to get ‘er done, and (finally) raised anchor on Thursday at 7:00 AM. We negotiated our way out the channel, unfurled most of the main and all of the jib, and turned west to sail along Grenada’s southern shore. This allowed us to pass by all of the bays we’ve visited, Mt. Hartman, Clarks Court, Port Louis. We waved to our friends, though they couldn’t see us and softly said, “Good-by Grenada. We’ll be back.”

We sailed. We kept watch. I made bread. We read. We sailed. I learned a few new things and discovered that I’d retained all I’d learned on the way down. We hadn’t made an overnight passage since the one from Guadeloupe to St. Lucia,  We hadn’t spent three or more days at sea since sailing from the Dominican Republic to Puerto Rico. The weather predictions were tenuous due to a low merging with a high and a possible tropical storm forming north east of the Caribbean islands. Those folks coming down from the states to the USVI were experiencing heavy weather. We gleaned that we could sail into that, or have light and variable conditions, or strong northerly winds and swells making it hard to reach our destination. If a real storm had turned in our direction, I had plotted the forty, fifty, or sixty mile jaunts to the east to safe harbors in St. Lucia, and Guadeloupe. None of that happened. The winds were largely steady.  Though we were teased each day with one hour of little or no wind, it would return 10-15 or 15-20 from the northeast. We were on a fairly comfortable beat or a close reach all the way to St. Thomas.

A few photos from Grenada: 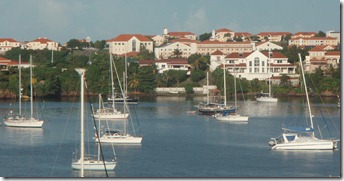 La Luna is the third boat from the bottom in the row of four boats on the left. This is Prickly Bay, where we were anchored for most of our stay in Grenada. 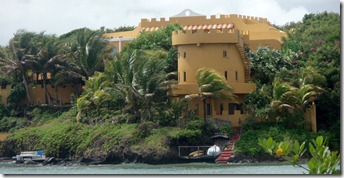 A castle on Grenada.  I loved it. Dora thought it reminded her of Legos. She has a point. 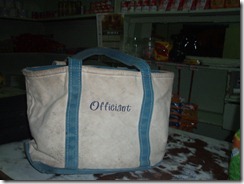 Here (finally) is the Officiant Bag in Grenada, sitting on the bar at Nimrod’s. Nimrod’s is an interesting local bar, owned by the same family for three generations. One of our friends says it reminds him of the bar from Star Wars. In a good way.

Here’s EW with his walking stick, at the parking lot of the Seven Sisters Falls. Sharon L., a dear friend we made in Grenada, sent this photo to me. 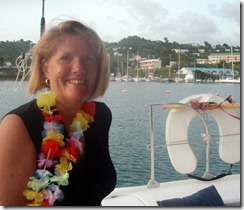 Another trip around the sun, and the anniversary of the start of our sailing adventure. We celebrated with bubbly, cake, and stir fry (not necessarily in that order) with dear friends John and Dora, and Jeff and Sandy. 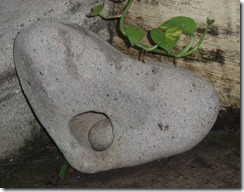 We will carry a piece of Grenada in our hearts forever.

Hi guys,I can't believe that it's been a year and for us "up" here the season is over and shrink wrapped.Thanks for letting us follow along for the last year,it's been so cool to be along for the sail....Wishing you many more adventures,calm seas,fair winds and good health into year two!!!