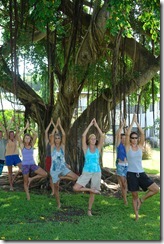 I’ve been attending an amazing yoga class on the lawn here in Grenada. Gabi, the instructor plans to open her own yoga center when she returns home to New Zealand, and right now we cruisers are able to take advantage of her skills and have an incredible yoga experience. Throughout the sessions, she gently reminds us to “Soften your shoulders”, and other body parts. It took me a couple of weeks to understand “soften”, now I’m trying to embrace it throughout my day.

I’ve always hated to be told to “Relax,” but I accept that I need to soften my edges, my responses, my automatic reactions. During a recent yoga practice, Gabi had us think of something about ourselves we wanted to change and to repeat it, in a positive manner, three times to ourselves. “I am softening. I am softening. I am softening.”  Later that day,  I had the opportunity to work on softening my inner voice, and my presentation to the world.

EW had arranged a hike to Concord Falls – the easy way. We first visited this beautiful waterfall and pool on the six hour hike over the mountains a few weeks ago. On that first trip to the falls, we hiked out a shorter trail that ended at the more accessible Lower Concord Falls, right near a road with tourist shops and a bar. After a number of well deserved beers, we arranged for a taxi to take us back to the Port Louis Marina. For our more recent visit, we took a bus from the terminal in St. George’s and walked up the road to the first falls before setting out on the 45 minute hike along the trail.

Now there are steep roads in Maine, but they’re nothing compared to the steep mountain roads and driveways in the Caribbean. After all, here they don’t have to worry about ice and snow, just good brakes, a working clutch, and a loud horn. (We trudged, spreading out in groups of two and three with EW striking on ahead. EW likes going up and when he goes, he keeps going. We found him waiting for us in the shade by a bridge, where we all regrouped, rested, and went on again, grouping together in twos and threes.  Shortly afterward we realized that the group had grown by one. W,id pronounced Wade), a local young man, wanted to accompany us as our guide. EW and I didn’t want a guide because we knew where we were going, and didn’t want to pay anyone we didn’t need. W’id smiled and stuck with the group.

Cruisers are independent types, or we wouldn’t be cruisers, and that is more evident when we run in packs, as keeping cruisers moving in the same direction – figuratively and literally --  is like herding cats. Some of us were adamant that we didn’t want a guide tagging along. Others of us asked W’id a lot of questions about the area, the falls, the farms, and the produce. I realized we would have a problem ditching W’id when I saw that some in our party were chewing on sugar cane he’d cut for them, and that EW was carrying a cocoa pod, and offering the seeds to all of us. Even so, more than one of us told W’id we weren’t going to pay him because we wanted to be fair in case he could get another group to lead that day. However, we were the only group walking to the upper falls, W’id stayed, and I lost my soft. Frankly, I’m often at a loss understanding how to politely refuse help or how to pay/tip when I want assistance here. We are guests in their country and, like much of the world, they are in a recession and have high unemployment. Additionally, they haven’t fully recovered from Hurricane Ivan. While there are educated professionals, entrepreneurs, and well-employed service providers in this country, there are others who live from week to week.  This man was not begging, he was offering a service. Like the persistent bus drivers, he didn’t listen to our first, second, or third polite rejections. It’s a free country and we couldn’t prevent him from walking with us, and some of our party had implied acceptance by engaging him along the trail. W’id stayed and my soft disappeared. We finally reached the top of the road at the lower falls, where one can find gift shops, juice, beer, and an impressive falls and pool. To us, that’s the falls for cruise ship passengers and resort tourists. It is the easy falls, and beneath our notice. We are cruising sailors and we were heading to the upper falls, with W’id. EW and I stewed. (That’s an intentional pun.) EW was less pleased than I was that a guide had joined us, and I picked up on his displeasure, which fed my displeasure. Soft just wasn’t happening. In the meantime, one of our party was feeling uncomfortable that all of the local men we met were carrying machetes. “I just feel under-armed,” he said. “Doesn’t it bother you that everyone has a weapon but us?” That didn’t bother me at all. There were tilled fields here. The men with machetes were carrying large feed bags filled with produce and nuts. “Those aren’t weapons,” I said. “There tools. Just imagine they are carrying hoes. It’ll make you feel better.” I had little effect, and he lost a bit of his “soft”, too. Though later, he realized that these farmers presented no threat and all of them offered us a pleasant good morning. 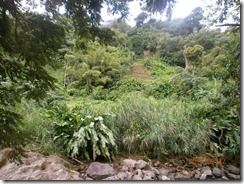 So here we were, leading a group of cruisers through a beautiful section of Grenada, past trees with papaya, nutmeg, and avocados, around fields of carrots and thyme; and over sweet brooks populated with small fish – and there were a few of us who just weren’t in the moment. I stewed, and then, I heard myself chanting at yoga that morning, “I am softening. I am softening.”  I took a deep,cleansing breath, I softened my shoulders, I looked around at that beautiful day, and I smiled at W’id, and welcomed him. Dora was standing nearby and later said that she saw the moment that I got it. The day had been perfect, now I recognized its perfection and fully embraced the experience. W’id helped some of us over rocks, and pointed out easier ways across the streams. Once we had reached the first brook, he removed his high top sneakers, hid them in the tall grass, and continued the rest of the way barefooted. (One of our party, from Australia, was barefoot the whole day. How do they do that?)

W’id lived along the road we had hiked to get to the lower falls. He was a guide and a farmer and he told us that the overgrown road at the start of the trail had been a donkey cart track, used to cart nutmegs to the main road, before Hurricane Ivan wiped out 90% of the nutmeg trees. Hundreds of jobs were lost and it’ll take the industry over 20 years to recover. 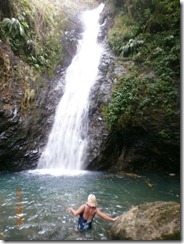 At the pool, W’id jumped in with us and enjoyed the refreshing water. He helped some of us beat the current and get closer to the falls, and we shared our lunch with him. None of us suffered from hunger. It was a wonderful day with old and 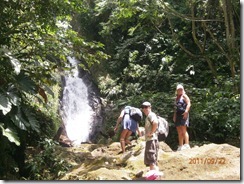 new friends, cool water, and a stunning falls surrounded by tropical foliage. When we were ready to head back to civilization, W’id led the way for the stragglers and when one of us slipped on a boulder and fell between two stones in the water, he was the first at the rescue. He pulled her quickly, and efficiently straight back so that her foot was not caught between the rocks. She was bruised, but fine – thanks to W’id. 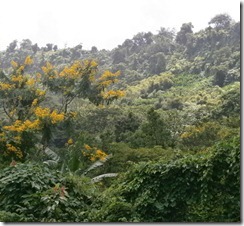 Back at the tourist falls, we enjoyed a cold drink from the vendors, and someone purchased one for W’id. Most of us tipped him. Still he continued down the road with us, picking a bouquet of healing herbs and lemon grass which he gifted to the woman who fell, and hailing a bus to take us back to the terminal. I was delighted to have met W’id. I wish him well and I hope some of those cruise ship passengers hire him to guide them to the real falls – after we’ve left the area. Right now, we enjoy thinking of the Upper Concord Falls as the sailors’ falls, and W’id as the sailors’ guide.

NOTE: Special thanks to Carl from S/V Sanctuary, who provided these beautiful photos from our hike. Gabi provided the yoga shot of us in the Tree Pose under a banyan tree. Also many thanks to Alice from S/V Ocean Star who gifted us their old Olympus camera. I’ll be able to take photos, and am researching our next camera – to be purchased in St. Thomas or Puerto Rico this winter.

Wonderful blog. You captured the day perfectly. I think that "softening" or "going with the flow" is one of the best skills we learn as cruising sailors - one that I wish we could easily tranfer to everyone living "in the real world." I also think the Grenadian tradition of saying good morning and good afternoon to everyone as you meet helps with the "softening" but probably will get us odd looks when we get to the states- which is sad.

Thank you D & J. High praise from you two! It was a great day together.

"Life is for learning and growing" - whether in the Caribbean or New Mexico or . . . We can learn our lessons anywhere. As your barefoot crusing buddy would say, "Good on you." Best blog ever, Barb, and the pictures were beautiful, too! Wish I could have been there enjoying perfection with you.