On the Concord Trail … Again? 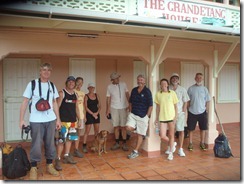 On Wednesday, I played dominoes, and was joined by Sandy from S/V Magic Inspiration and Dora from S/V Windrifter, who both came over on the bus from Port Louis. Ten women at two tables, played dominoes, drank wine, and mostly ignored the fact that we all had husbands. Until Sandy mentioned, “Hey, we’re going to do the Grand Etang to Concord hike again tomorrow.”

“You are not serious,” I said. She laughed and assured me that she and Jeff were once again taking that long hike over the mountains—the hike that had taken us 6 hours a few weeks ago. “Well,” I said, “If EW hears this, he’ll want to go.”

Ever since that infamous hike across the country, EW has said that he’d love to do it again. The short hike we took to the same falls didn’t appease his sense of adventure. After dominoes, we invited the men to join us for dinner at de Big Fish and as soon as EW heard about the trip, he signed up for another adventure. I declined. I’d like to make that hike again, but not this year, and it was supposed to rain the next day, and I needed to get some things done, and … I did not want to go.

It was fine with me if EW went, but there was a problem. We were seriously low on groceries and I had nothing for sandwiches or snacks--and no bread. Dora, dear friend that she is, offered to make EW’s lunch and it was settled. I’d have the dinghy and boat to myself on Thursday while EW sought adventure on the Concord Trail.

Jeff and Sandy, our intrepid leaders from the first hike, weren’t leading this one. There were 11 hikers and one dog who met up at the Grand Etang park to start the hike. Two couples and one dog arrived via truck and planned to hike to the top of the mountain and return to Etang, not opting for the trip through to Concord Falls. The other 7 had traveled by bus and were going to hike the same trail we’d taken earlier in the season, across the mountains to the falls and then out to the road on the other side. What EW, Sandy, and Jeff didn’t realize is that the four who were hiking through “with” them, were the kind of folks who take the runners’ trail on the Hashes and who evidently turn every hike into a runners’ hash. The entire group met up at the turn, four went to the top of the mountain and seven headed down toward the falls, and that was the last EW and Sandy saw of the four hikers in their group.

At one point, during a downpour, Jeff, Sandy and EW were taking shelter under a tree, waiting out the worst of the weather, when they heard someone whistling and calling to them. Jeff volunteered to move down the trail to meet the other hiker who had come back to find them. His position was that if they were going to be “his responsibility” they were going to have to “keep up”. Let’s just say that didn’t go over well with Jeff, or with Sandy and EW when they heard about the conversation. Both Jeff and Sandy are very fit and both of them take the runners’ trail on a hash, but they hadn’t intended to hash along the trail to Concord. It was decided that the other four bore no responsibility for the three slower hikers and the group split.

Jeff, Sandy and EW continued their pleasant, but wet and challenging hike and made it to the falls in four hours. 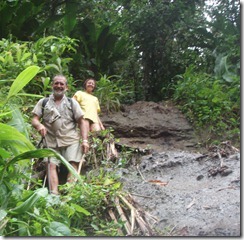 They never saw the other folks who evidently made it to the falls, jumped in, and took off back to town. That’s cool. This is a lifestyle populated with strong individuals. Perhaps those planning the hike should have described their style and pace prior to inviting others along. EW and I enjoyed the first hike because we all stopped frequently, watched out for each other, and hiked with different people at different times. We became friends with sailors who had been acquaintances. For us, getting to know different people is the most important part of cruising activities. We are people people. He was sorry the others didn’t feel the same way, but enjoyed hiking with Jeff and Sandy and had no trouble keeping up with them. 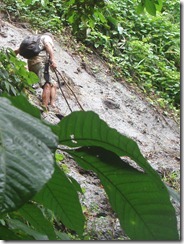 Frankly, EW easily kept up with them because he didn’t have to spend time helping slower hikers, like me, for instance. The steepest part of the trail is just before the falls, a rock wall with high natural “steps”, about 6 inches wide. That area had experienced a landslide, making the descent to the falls much more treacherous than it had been a few weeks ago. Thankfully, both EW and Jeff and taken rope along and all three were able to use it to safely reach the falls. Somewhere along the way, Sandy dislocated her baby finger, but EW and I know what to do about that (after the experience at Cape Fear) and Sandy trusted him to yank it back in place. We hear that finger is fine now with a slight yellow bruise, and no swelling or crooked bits.

They hiked, they swam in the pool, and they walked back down the hill to the bus. It was a good day. I got groceries and was able to feed EW a manly meal upon his return, listening to his adventures and very, very thankful that I had opted out of this one. 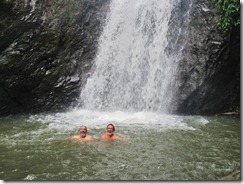 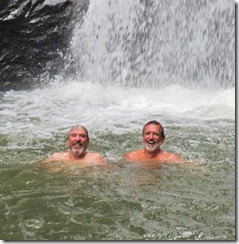