If I Were Retired, I’d Play Dominoes Wednesday Afternoons 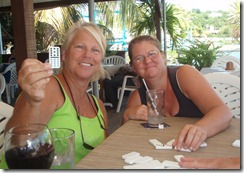 Oh, wait. I am playing dominoes on Wednesday afternoons.

Carl and Carrie have faithfully taught us and the folks aboard Windrifter and Fox Sea the art and strategy of Mexican Train Dominoes – the Trinidad version. A group of women get together and play Wednesday afternoons at de Big Fish, and this week Dora and I decided to join Carrie at the games. There were 10 players, so we set up two tables, ordered drinks, and got out the dominoes.

Carrie, Dora and I all ended up at the same table. In a perfect world, the game is paused every three or four rounds and those who have the highest and lowest scores at each table switch to the other table. This allows us to meet other players – and learn new strategies. Our table was a bit late getting started and we played more slowly so the other table decided not to wait for us to catch up. We had a great time, and got to get to know the two ladies we’d not met before. I always like that.

Aboard our various sailboats, Carrie has been a frequent winner and Dora – well let’s just say she hasn’t been a threat. Carrie did not have a good afternoon, which she blames on the glass of wine I convinced her to share with me. Dora didn’t bring up the rear, and kept her score under 400. And I won!  I’m amazed. Aboard our sailboats, we have code words to indicate our displeasure with someone’s play. We refrained from voicing those words at this friendly game in a public place. We did good.

EW and I have to purchase a larger domino set, and those cute little trains. I need to practice.

The game of dominoes is one of the most famous, home-played games in the course of mankind’s history. Since ancient cultures, dominoes game has been a favorite of the young and old. And to date, it is still widely played all over the world.