There are quite a few cruisers from Canada here in Grenada. If fact we’ve met folks from England, France, New Zealand, Australia, Ireland, Norway, Sweden, Germany, South Africa, Italy, and I’m sure I’ve missed a country or two. In Canada, Thanksgiving is celebrated on the second Monday in October, so we were invited to a Canadian Thanksgiving at Clarks Court Marina, where fifty-some cruisers sat down to a feast. Bob, the owner of the marina, purchased the turkeys, rented tables and chairs, and opened his kitchen to the two cruisers who roasted two whole turkeys and numerous turkey breasts.

The rest of us brought side dishes and desserts. I made a version of Julia Child’s cornbread/sausage stuffing and a lemon tart thing. One of the local bus drivers had lived in Canada for 15 years, and he offered to pick up those of us who weren’t staying in Clarks Court Bay. His daughter and two friends joined us for dinner. It was a great day. We ate too much and, frankly, I drank a bit too much wine. We sang Karaoke without a microphone in a group. Basically, a number of women danced and sang to a whole lot of different old rock and pop tunes. A wide screen TV provided the music and words to the songs. Most everyone else ignored us. We didn’t take it personally.

It happened, that none of our closest cruising friends attended Canadian Thanksgiving, so we enjoyed meeting new people and getting to know others we’d met earlier. We met a super couple from Toronto, talked with folks from Ontario and Massachusetts, and I danced with ladies from Grenada, England, Washington state, and Texas. Once the pool table had been retired as a buffet table, EW played pool with the bus driver’s daughter. 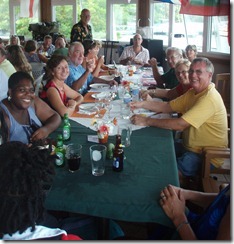 Thanksgiving Table One. These people are smiling because they will be first at the buffet. Note the man standing in the back left. His seat is the empty one next to the man in the yellow shirt. 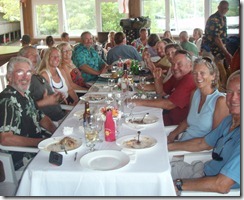 Thanksgiving Table Two. Most of these guys are actually from Canada. EW’s from Niagara Falls, NY so he was “almost” from Canada. (See the man standing on the upper right? That’s Ken. He still hasn’t taken his seat.) 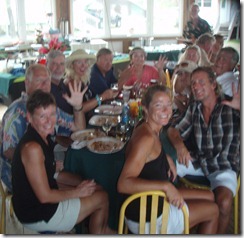 This is Table Five. They complained that they’d be last and nothing would be left, but after the meal thanked all of us for leaving them plenty. It wasn’t hard to do. There was a lot of food.(Yep, that’s Ken in the back. He was stalking me – or I was stalking him.) 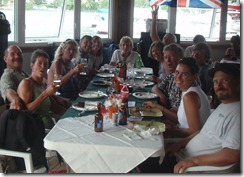 These folks are happy to be at Table Three. It was closest to the desserts! 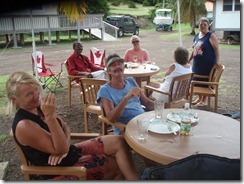 Kids sat with the adults, but we had smokers’ tables outside. (That works very well.) 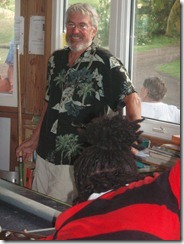 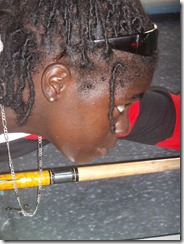 Do you think this man is having fun?

The bus had to leave, so they never finished the game.

And yes, EW took one photo of me dancing. You will never see it. Never.

But I had a great time!