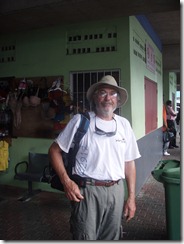 When EW led us on a hike to Upper Concord Falls recently, we were a party of ten cruisers who met at the bus terminal to take the Number Five bus to the Concord Falls road.  In Grenada, the bus system has licensed vans, seating 13-18 adult passengers. The vans try not to leave the terminal without a full load, and one driver had claimed our party as soon as a few folks had gathered at the terminal. Just as we were getting ready to load up, one of our group had to stop at a kiosk to pick up a snack for the trip, and we suggested that the bus driver might want to move on without us as he had 6 passengers on board waiting to go. He was adamant that our ten fares where his, so everyone waited.

I abhor making anyone wait for me; I have a physical reaction to it. But that morning, I was working on becoming a softer, gentler Barb,  I did pretty good at staying calm, cool, and collected – my mother’s phrase. One of our party, a person newer to the bus system in Grenada, suggested that this bus would be too crowded with 16 people and that we should wait for a less full bus. I laughed, and told him that they don’t leave the terminal until they’re full. “Prepare yourself for a crowded bus.” While we waited on the curb, a local taxi driver kept trying to get us to jump ship and I found his persistence annoying. I finally put up both hands in the “stop” position, smiled, and told him that we were not budging, and then I suggested we all wait in the bus to show our allegiance to the driver who had claimed us. I got in the front seat, next to the driver and EW sat on my left. (Traffic and vehicles are backwards to our norm in the US.) As I have learned to do, I turned and wished everyone aboard a good morning and also apologized for keeping them waiting. One young mother with a three year old sitting next to her nodded coolly to me. She wasn’t feeling her soft., but she had every right to be displeased that we cruisers were holding her up.

Our straggler arrived, and just as we were closing the door, another local gentleman clambered aboard, requiring the three- year-old to give up his big boy seat, causing him to cry. I turned and look sympathetically at mom and mouthed, “Can I give him a sweet?” She softened, and nodded. I opened my pack and removed one of the macaroon brownies I had made for the hike. Happy child, happy mom, the whole van softened.

I could be getting good at this softening thing.

Now, do you want to know how to make special brownies?

Just use any brownie mix – I purchase the ones that come in bags, not boxes, so I don’t have to re-package them when we get to the boat. Mix as directed, and spread about 2/3 of the mix in the bottom of the pan. Make a coconut macaroon mixture (see below) and dot the brownies with that, spreading lightly. Top with the remaining brownie mix (it probably won’t completely cover the macaroon mix) and bake as directed. Don’t overcook.

The extra dishes you have to wash are worth it. Trust me. Oh! You can use a hand egg beater and achieve stiff peaks.

Barb, Thank you for sharing the recipe ... these are so yummy!