Boat Projects A Year of Cruising and Repairs

I’ve said it before, and I’ll say it again: Living on a cruising sailboat allows sailors to repair their boats in the most beautiful ports of the world.

In our second year of cruising, I’ve decided to document all boat “Projects” and “Another Projects”: those big and small projects; the cosmetic ones and the structural ones; the ones we plan and the ones we didn’t anticipate; the free ones, low-cost ones, and the budget busters. “We fix,” EW says, “It’s what we do.”

In 2010, we’d planned to leave Maine early in September, but due to unanticipated projects, we didn’t leave until October 18. Since many of our new items were still in boxes, from Maine to Nassau in the Bahamas we installed parts, waited for weather and delivered the boat. From Nassau to Grenada, we sailed, cruised, repaired, and sought parts. Although the second official year at sea starts on October 18, this account begins on October 1, 2011.

Year Two of The Harts At Sea, We Fix!

Dinghy Floor. The last two weeks have been dinghy focused. We have a dinghy for Maine sailors, it’s PVC, has an inflatable floor, and wooden transom, and is designed to be used a few months a year and bagged and stored over the winter. We’ve abused her by taking her to the Caribbean, and running her hard for the past year. Two weeks ago the transom started to separate from the hull on the starboard side. We quickly removed the motor and hoisted the dinghy to the deck and relied on the kindness of our neighbors and friends while EW worked up a repair. This will not be part of the official 2011 repair list, but I must share EW’s ingenuity. He purchased long bolts, big fender washers, nuts and 5200. He cleaned the dinghy, drilled holes through the transom and the rubber material that attaches the transom to the pontoon. Then he sealed it with 5200 and inserted the bolts with fender washers on both sides of the transom. Look Ma, No leaks! The whole process took less than 24 hours. 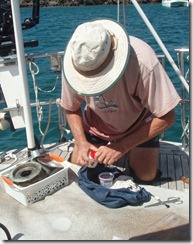 That brings us to the first project of the 2011 Cruising Season. On the first of October the dinghy floor sprang a fast leak. How fast was it? We had to pump the floor before starting the engine, or every fifteen minutes if we were on a jaunt. So, we hoisted the motor, and EW set the dinghy floor on the aft deck and got out his repair kit. It was a windy day. He still has a basket of heavy windlass parts so he used that to hold the floor down and to press down on the patch once it was completed. First, I sprayed water on the floor and added a little soap, and the leak bubbled like a miniature fountain. EW cleaned an area around the hole to prepare for the patch. This is only the second hole in the floor, but the fourth time we’ve patched it. I patched the first hole twice with the glue provided by the manufacturer. EW patched it 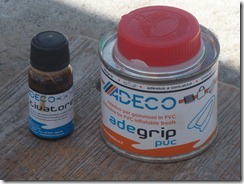 the third time using ADECO’s Adegrip for PVC. It’s a two part glue, must be mixed in a cup, and is supposed to have 72 hours to cure. We’ll give it 48 hours and it’ll have to be happy with that. We have places to go. Actually, in this heat, 48 hours seems to work. 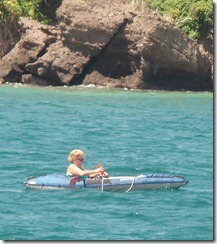 Type of Project: Another Project. Not anticipated.

Active Time: 1 hour total, including getting the tools together, putting them back, and the time I spent getting in the kayak to retrieve the patch kit tube after EW lost it overboard.

Opportunity Cost: Couldn’t use the dinghy Saturday and Sunday. Stayed on the boat Saturday, and found a ride to the jam session on Sunday. Went without chocolate during craving on Saturday. That’s just as well.

My wooden sail boat needed some quick repairs too. Water was leaking inside from the bottom of the boat because of a hole made when I hit a shallow shoal. I fixed it using marine epoxy and fiberglass strips. It's okay now and I hope it will last longer.