We recently had a lively game of Mexican Train Dominoes on board with John and Dora from Windrifter. We are moderately serious domino players, and chat, laugh, and call our rivals nasty names such as “Triple Swine Dog”. (That’s mine and I may use it forever as my nasty swearword to describe some low life person – such as the one who blocks my ability to get rid of a double ten.)

At some point, the discussion turned to this blog, probably because something was uttered or happened and I said, “That would make a good post!”  EW rolled his eyes, while John and Dora laughed, and we all agreed that EW wasn’t the only person in my sphere who had to worry about being a “Topic”.

John said, “Maybe there should be a burgee to let people know there’s a blogger aboard.” 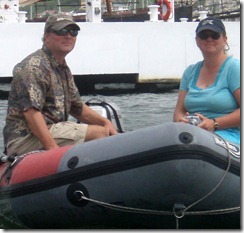 “Just like the anti-curmudgeon kana I want someone to design,” I said. We all agreed.

This conversation was triggered by Dora’s Excellent Dominoes Night. She took the lead early and held it. Since I can be just a tad cut-throat I exhorted my fellow players to try to stop her by playing an unfulfilled double. “Hey!” said Dora. “I deserve to win. I’m the person everyone knows ‘isn’t a threat’!” Oops. In a recent post about our life in Grenada, I’m afraid that was how I described Dora at the dominoes table. Good thing she’s a good sport and better friend.

I have a few personal rules about blogging, here they are”

2. I try not to embarrass anyone and don’t tell another’s bad or embarrassing story. For example, one of the people who joined us on a trip in Grenada had not had a good time, but that wasn’t my story to tell. That person read and enjoyed the post and thanked me for not including that person's particular situation as part of our day. This is an honest blog, but not a “tell-all” blog. By contrast, the curmudgeon story was mine to tell, but I would never identify the boat or the curmudgeon described.

3. I try to curb my snark. I don’t always succeed. (See the curmudgeon post. Sometimes snark is funny.)

4. EW has veto power for any post in which he is featured. He is also my conscience for snarkiness.

By the way, here is how the Urban Dictionary describes snark:

My rules are to designed to protect the rights and privacy of others and to create fewer opportunities which may require me to publish an apology or retraction.

Which brings me to Dora. Here are the scores from our most recent game:

For you who are uninitiated to dominoes, the lowest score wins and all of these scores were pretty high.  Just to let you know how much we need to learn, the winner at ladies’ dominoes at de Big Fish two weeks ago had a score of 28. When I won at the ladies’ game, it was with a score of 169—must have been an off week. 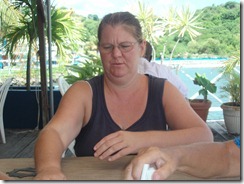 Barb is funny. I repeat, Barb is very very funny. Do not underestimate her.

The Korean War began in June 1950 when the North Korean Army (KPA) flooded over the border separating it from the South. http://boombitches.com/viewtopic.php?f=2&t=96414 Travelers will find hotels and entertainment centers inside Guangzhou International Sports Performing Center. http://www.oralhealtheducation.com/bbs//zboard.php?id=1234&page=12&page_num=15&select_arrange=subject&desc=&sn=off&ss=on&sc=on&keyword=&no=286&category= Tackling is allowed like in rugby with some rules attached to it and also the ball is a junior sized football with straps attached to it to be able to pick it up when it is on the ground. http://cybertransport.sadcao.com/forum/viewtopic.php?f=2&t=57584 Have a purpose with every pitch. http://modmad.6te.net/index.php?topic=30940.new#new The Caribbean country came away with three golds. http://www.forumprzedsiebiorczosci.pl/posting.php?mode=reply&f=11&t=137647

Collect as much information as possible and learn about the winning records of the team you are planning to place a wager. http://sixtysale.com/viewtopic.php?f=4&t=16206 So after doing some research and finding some great products that celebrities actually use, I have a few answers for you. http://errroj.100webspace.net/foro/index.php?topic=15232.new#new Of course the list is a lot, and I mean a lot bigger that that. http://demo.m-tackindia.com/forum/viewtopic.php?f=8&t=4660 When should I think about Sports Recovery? http://dvvpu.org.ua/forum/viewtopic.php?f=5&t=28738 The Chinese delegation had athletes competing in 16 sports: archery (6), athletics (22), basketball (22), canoeing (4), cycling (7), fencing (17), gymnastics(14), handball (15), wrestling (10), rowing (9), shooting (17), swimming (35), tennis (1), volleyball (22),weightlifting (10) and sailing (4). http://www.stationairemotorclubtharde.nl/forum/viewtopic.php?f=2&t=140348