Home Archives Profile Subscribe
I Have an Inner Goddess? Who Knew?
On the Concord Trail … Again?

Another Project with the Honda 2000i 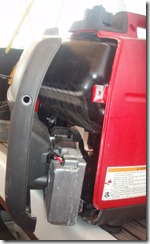 Oops! EW said it wasn’t my fault. He was off for the day, and I had to wrestle the Honda Generator up to the cockpit and aft to the cabin top, and start ‘er up. It was rolling quite a bit and getting “Jenny” up the ladder was no easy task. I persevered, and with little lifting hops I moved her aft to the cabin top, then turned the appropriate switches and stood on the side deck where I grasped the handle and pulled—and almost flew overboard when the cord broke about 5 inches in from the handle.

I left the machine where she was and went back to my tasks for the day, knowing that I’d have to inform EW that he had “Another Project”, an unexpected task that was bound to take up some of his valuable guitar or regular project time. (Who am I kidding? Except for the 1 hour he spent a few days ago, neither EW nor I have worked on any expected project for some time. We’ve been having too much fun in Grenada. We frequently say that, “This is too much fun!” in the same manner as an acquaintance in Maine, who identified herself with folks from Mainline Philadelphia, and who therefore has an interesting way of talking that pretty much excludes everyone else from her “too much fun”.

Anyway, back to Jenny.

The owner’s manual is no help here. Throughout our cruise we’ve heard other folks offer the Honda 2K repair manual on a disc, but we’ve been negligent in taking any of them up on their generous offer. That’s a mistake. EW opened Jenny’s side and discovered he had no access to the pull cord housing. EW opened her aft end and discovered a fuel tank and all sorts of other things, but no access to the pull cord. I went online and Googled “broken cord Honda 2000 generator”, and found a cruising blogger who had struggled with the same issue, figured it out, and—bless his heart—posted directions in his blog. I love people like that.

While I continued to write about dinghy repair projects, I was frequently interrupted by EW waiting for the next set of instructions. I’m  not going to repeat them all here, if you have the same issue, check out Jim and Deb’s Adventures for these instructions. (Thank you, Jim.)

EW started this Another Project at 2:30 PM, and Jenny was up and running by 5:15. What transpired during those nearly three hours? One must--well, not this one, but those like EW and Jim who tackle these projects must--remove side screws, handle screws, three electrical connectors, the back of the generator and the fuel tank, in order to access the pull cord housing. Words were uttered, mumbled, and shouted during the process. I, in my newly softened manner, ignored him unless he asked me for further instructions. At one point, I heard him mumble, “It makes no sense to shout at inanimate objects.” “Hmm.” I couldn’t resist asking, “So why do you?” “I just can’t help myself,” he said. 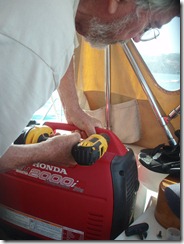 In his post, Jim cheerfully mentions that if you use the Honda, you will have some seized screws. The implication is that if you don’t use it, you won’t have to repair it. EW had to drill one out of the screws in the handle, and wasn’t as cheerful as Jim seems to have been. EW also had trouble disconnecting the third electrical connector and told me to “have at it”. I was successful, mostly because I dared to be more ruthless than he (after all, I wouldn’t be the one to fix it if I pulled too hard).

He got her done, and then said, “Now, what’s he say about putting it back together?” I’d been waiting for this, smiled, and read the following: “Finally, put everything back together and you are set.”

He mumbled, but I was his only option, so that’s what we did. It worked.

This project cost nothing but time: 2 hours and 45 minutes. How’d you spend your Friday afternoon? EW fixed our Honda 2000i and I helped. Thanks, EW. Thanks, Jim.

The Year’s Project Totals to Date:

We learned from, who else, another cruiser that the first thing you do with a Honda Generator is to undo all the screws you can and reassemble them with an anti seizing agent. Have I done it yet? - no, but it's on the list.

Buy used car and get a used car assessment report before buying. This is very important because used cars are a risk to buy and invest money on.