The Old Gray Dinghy ain’t what she used to be. EW’s spent a lot of time with her over the past two weeks. We’ve also spent time researching a new dinghy and will purchase one before the end of the year. In the meantime, EW patches.

On October 1, EW had repaired a hole in the inflatable floor of our dinghy, but hadn’t checked for other holes. (Bummer.) When a new one surfaced less than 24 hours after the fix, he used duct tape to hold it for a few days (it’s a Maine thing) and decided that using the 36 hour cure stuff took too much away from our play time. We were heading in to town for a concert at the museum on Friday, so he suggested we stop at Island Water World to purchase a repair glue that would set in three hours. Flex Set is a two part epoxy from Marine Tex. You can mix a bit at a time, so it doesn’t all go “off” at once, and the three-our set time is crucial to my social life. So after breakfast on Tuesday, 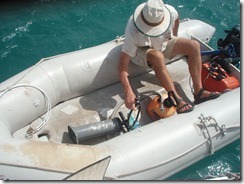 EW got back into the dinghy with soap and the water sprayer, and checked the floor for holes, finding only the one he’d packed with duct tape. He made the repair, we let it set for the afternoon and went in to the jam session at de Big Fish. Unfortunately, a day later, the floor was flat.

For a couple of days we pumped the floor with each use, (Honestly, EW pumped the dinghy with each use. I pumped it if I couldn’t absolutely get away without it.) Friday afternoon became “Another Project” day, and EW started the list by tackling the dinghy floor for the fourth time. (But who’s counting?) Though the glue cures in 3 hours, he wanted to give it more time to set up, so we had a quiet evening at home on Friday letting the holes cure. 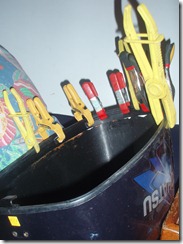 He also had to glue the foam around the outboard. From Rodney Bay to Grenada we had to hand wind the outboard, so the top was removed frequently. That caused the foam padding on the inside of the top of the outboard to become unglued, and that would prevent the lock from remaining closed. Salt water on the engine is a bad thing, so EW tried a new glue on Friday, clamping the motor to allow it to cure. 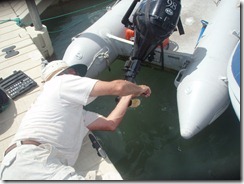 Finally, on Saturday morning I had to walk to town so EW took me in and stayed tied up to the dock while he changed the zinc on the outboard and once again cleaned the hose of salt so that it would pump and keep the engine cool. Now, I can drive fast again. He had thought that the motor needed a new impeller and water pump gasket, so he’d purchased those when he purchased the zinc. We didn’t need them, and they’re in the spares locker for dinghy parts, but the cost will be documented here.