“Take it, Tony!” I heard EW say that on Sunday afternoon. He sported a huge grin, his toes were tapping, and he was leading the jam session at Whisper Cove Marina in a rendition of Paul Siebel’s “Louise”. EW was living his dream.

When we met, lo those many years ago, EW had a guitar and played a few tunes. He actually played for me on our third date and I fell in love – not because he was that good, but because he was that unselfconscious about playing. He wanted to share something he loved with me and I melted. Shortly after that he began to take lessons from a classical guitarist in Portland, who consented to provide the music in our low-key wedding. I walked up and down the aisle to a classical guitarist playing Bach. It was a wonderful way to start our married life together. 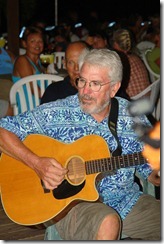 But I digress. EW’s favorite music is that of singer/songwriters who play guitar, and any excellent guitar player. We listen to Chet Atkins, Django Reinhardt, Guy Clark, Jon Edwards, Leo Kotke, Bob Dylan, and many, many more. One of EW’s dreams was to play music with other cruisers, in the harbors we visit. He’s never going to make any money at it, but he has improved considerably and even has the courage to sing in public.

We recently attended two jam sessions. There are other musicians who are more adept than he, but he’s still unselfconscious, willing to try, and unafraid of being wrong out loud in public. He asks questions, learns new chords, takes advice, and attempts to play any song the others start. He will also take his turn to lead a song or two. Right now “his” songs are the following: “Louise”, by Paul Siebel; “I’ll Be Your Baby Tonight”, by Bob Dylan: “Boats to Build” by Guy Clark, “Norwegian Wood”, by the Beatles; “Mr. Bojangles”, by Jerry Jeff Walker, “Knocking on Heaven’s Door”, by Bob Dylan"; “Cocaine Blues” 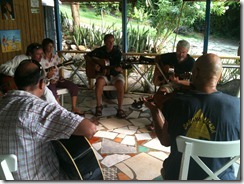 , by the Reverend Gary Davis; and a “Twelve Bar Blues Progression in A”.

Since I’ve heard all of these and others, over and over again, I tune in immediately when it’s one of EW’s songs. I love to hear him play. Some of my happiest quiet times in the house or on the boat have always been listening to EW practice while I read a good book. I don’t care if he’s running the same song or same phrase over and over, I never get tired of it. Currently, he’s working on “A Song for a Winter’s Night”, by Gordon Lightfoot. But, as EW said, “He plays it much faster than I can. It’s a hard lesson for that one.” That’s OK. I love to hear it. 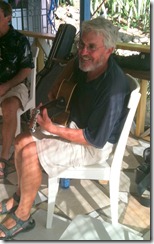 So, there we were, in an outdoor restaurant/bar in Grenada. The jam session took place in one corner and the audience sat at tables along the outside half wall. Like all bar audiences, we talked and laughed, but my antenna went up whenever I heard one of EW’s songs. He was singing and strumming “I’ll Be Your Baby Tonight”, when he got to the end of the verse, he looked across the circle at the excellent fiddler and mandolin player from Ragin Cajun, grinned,  and said, “Take it, Tony!” 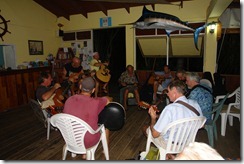 The photo at right and the one of EW in the light tropical print shirt were taken by Gabi from the S/V Ju-Ca, at the jam session held at de Big Fish. I took the other photos with the iPhone at Whisper Cove Marina.

Camera still out of service???

Yep. But EW's brother suggested I get out the iPhone. It was a d'uh moment. A fellow cruiser may have been able to find a new battery when she was in the states. Fingers crossed.