Home Archives Profile Subscribe
Hash– The Grenada Hash House Harriers, That Is
Are You Ready for Some Football?

Provisioning is not my best thing. The thought of trying to plan meals and purchase food for three and six months out makes me sweat. I don’t even plan all that well for a week of meals for two, which is why we have popcorn for supper at least once a month. EW is a saint.

As for clean. My boat is generally clean. No one has been grossed out or gotten sick on my boat, but few have stepped aboard and been impressed by its pristine condition. I don’t do pristine.

This is why I have such respect for the cruisers we’ve met who offer their boats for charter. Their white cockpits are spotless, and when they are under charter, the designated chef plans, provisions, and provides three full meals a day, with drinks, appetizers, and desserts at every evening meal. They even garnish. I don’t do garnish.

EW would be a great captain on a charter yacht, but I told him he married the wrong woman for that lifestyle. We have a number of friends who make it look easy. (I’m not fooled, but I am impressed.)

Here’s an email we received from Jeff, Captain of S/V Magic Inspiration AKA “Bwana” the leader of our fateful six hour hiking trip.

I wanted to follow-up on the Seven Sisters hike for this Wed.Since this is only expected to be about 2 hours round trip, plus a stop at the falls, we probably don't have to start too early.  We are thinking of meeting at the downtown bus terminal at 10:30, that will put us at Grand Etang around 11, and then the hour hike to the falls would put us up there for lunch/swim around noon, then returning down when ready.

Then, if you're up for it, would love to have you over for early dinner and dominoes or cards......there are a few recipes we need to try out, and need some victims :)   So you could shower here, etc...  Thought it would be better to do this in one trip for you, but we could always get together a different day if you prefer.  Dora and John will hopefully join us for the day and evening as well.

Any allergies or issues with these?

Yes! It didn’t take us long to respond. EW and I have no food allergies and few things we won’t eat. This sounded like a nearly perfect day. And yes, we still trusted Jeff to lead us on another hike – and even believed him about the two-hour thing.

One of the interesting and challenging things about living in Grenada for the summer is that there are many beautiful anchorages and good marinas along the southern coastline so boats are spread among the different harbors. Magic Inspiration and Windrifter have opted to stay on the dock in Port Louis Marina, a 20 minute bus ride from our anchorage in Prickly Bay. It’s easy and cheap to go back and forth by bus, as long as we remember to leave for home before 10:00 PM, when bus service stops. 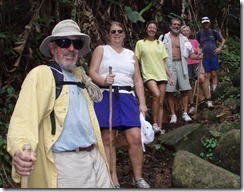 Vicky and Bob from Fox Sea joined us for the hike and the four of us met up with Dora, Jeff and Sandy at the main bus terminal in St. George’s, where we were hustled aboard a number 6 bus. Hustled was the word as the buses are private vehicles and the driver wanted our seven fares. At least one person was bumped from our bus and we were squeezed in with 16 other people. Two sat in front with the driver, four adults in each of the four rows, with two children on their mother’s lap, and two babies in their mothers’ arms. Everyone took this with good grace – except for the young woman who was bumped from the bus in order to allow all of us to go. The driver clearly felt that losing one fare was better than losing 7 fares. We all felt sorry for the young woman and would have gladly waited for the next bus.

We paid at the entrance to the Seven Sisters Trail, borrowed walking sticks from the pile by the door and set off 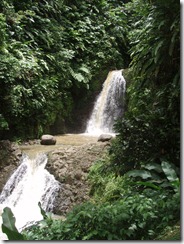 . The first quarter mile or so was along a farm road as the entrance to the falls is on private property. A petite farmer with huge waders and a machete welcomed us and repeatedly told us to stop back and get our shoes washed on the way out. “Lot of mud. Lot of mud,” he said. He was right. There had been downpours during the previous two nights, and much of the trail was muddy. Unfortunately, so were the falls and, while we enjoyed the cool mountain air, the hike, and the camaraderie, we did not swim in the brown water. We hiked, explored, took photos, ate, told stories and laughed – an excellent day. 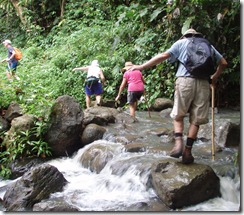 On the way out, Kenny appeared with machete in hand as soon as we reached the small bar (closed) at the edge of the farm. “Come. Come. I wash shoes.”  Sure enough, Kenny had clean water in a five gallon bucket with a big sponge. One by one we put each foot up on a rock and Kenny cleaned the mud off. He was handsomely tipped. EW and I talked with Kenny, who shared some of his spices and tea leaves with us, and gave me a handful of nutmeg. “Folks don’t ask about my farm,” he said. “I am blessed. I give you dis.” He also suggested we take a photo with him. I wasn’t kidding when I called him petite. The hug surprised me. 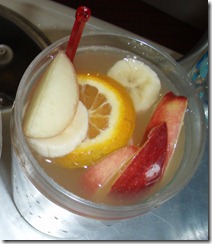 Back at Port Louis, I thoroughly enjoyed the shower and even used the hair dryer provided by the marina. It’s been a long time since I'd styled my hair. Jeff had showered quickly and was completing his white wine sangria – a trial recipe not mentioned in the invitation. Oh my goodness. I told them that this would be the perfect welcoming drink for their guests’ first night aboard. Nothing can go wrong after you have one (or two) tumblers of this sangria.

Jeff and Sandy are new to chartering, and clearly this life agrees with them. The are an excellent team, and take their guests’ happiness seriously – even with the guests are cruisers/guinea pig/freeloaders. Sandy had prepared the dinner the night before so she could enjoy the hike and each course was beautifully presented with no apparent effort.  That’s another thing I don’t do – presentation. I plate, I don’t present.

Each dish was offered in turn and the six of us would savor, chat, praise the cook and make suggestions. We 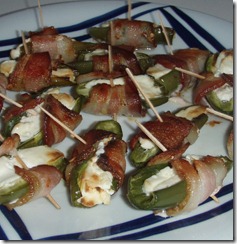 greatly enjoyed the jalapeno poppers. Anything that combines spicy with bacon is A-OK with EW.

Sandy served the chilled avocado soup with the corn fritters and we all agreed they wouldn’t be served together on a charter. I definitely liked Sandy’s plan to use the fritters as a starch on pork loin night. Jeff then slipped an extra course in between the soup and the quesadillas because he wanted to try making a smoothie/sorbet. “You know how restaurants offer sorbet between courses,” he said. “Well we can’t keep sorbet in the freezer but I think a small serving of a tart strawberry/mango smoothie would work.” 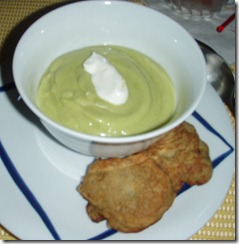 We can attest that it works very well, indeed. If I were the kind of person who offered sorbet to my boat guests, I’d make them a tiny smoothie. Of course you have to have tiny dishes for the smoothie – and cute little spoons – forget it.

Sandy and Jeff have a catamaran and take up to six folks on a charter. They have way more serving pieces/drink glasses than I do. In our home, I had a renovated kitchen and serving sets that included Depression Glass. Here I have five multi-colored baskets and one pewter tray. The wine glasses double as juice glasses or vice/versa. I am so not a charter chef.

The quesadillas were perfect, followed by domino lessons for Sandy and Jeff. They’ve been playing cribbage with guests, but that isn’t a game for a crowd and Trini Mexican Train Dominoes will give their guests a real cruising experience. We paused at the half-way point for warm coconut custard pie – to die for. In between courses, Jeff would clean up from the previous course, so the galley looked nice at the end of the meal, something else that doesn’t happen on my boat. I am so not cut out to run a charter.

We had such a good time, savoring every bite and playing dominoes that it was 10:40 before we knew it. The bus system officially stops at 10 and we still had two rounds of the game to go. Sandy insisted we stay over. They turned the air conditioning on in “our” cabin. It was heaven. 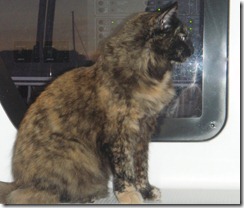 Sandy, Jeff, and Mango offer a crewed charter aboard S/V Magic Inspiration, based out of the British Virgin Islands. We can highly recommend them – and suggest you make sure they offer the sangria, the chilled avocado soup, and the coconut pie.

Sandy graciously emailed me the recipe for the soup and told me I could share it, so I am. Here you go:

Note that she includes the garnish. She’s like that.

And now for the FCC disclaimer: Jeff and Sandy were surprised I wanted to write a post about our day with them. Other than the wonderful meal, I was not compensated for this post in any way. We are friends.

It's 5:08am on a rainy, cold September morning in Maine. As I describe this and the website info about the Magic Inspiration I am totally entertained and taken to a world much different than mine. (Wifey says, "you just keep reading about that, 'cause it's as close as you'll ever get to it!")

Thanks for sharing your adventures!

Just read your posting about Magic Inspiration...it was great to hear from your perspective, as Sandy is my aunt....Glad to hear they're doong a great job! Martina

Oh my goodness! What a small world. We knew Jeff from marine stuff and first met Sandy in Hampton VA. She has such a quiet sense of humor -- I enjoy her a lot. How are things? Thanks for posting.

Thanks, GB. Both EW and I got a kick out of "wifey's" response. Sure she doesn't want a crewed charter as a graduation present. Congrats to her on her nursing career.