Are You Ready for Some Football?

EW is always ready for football. The only reason I’m not a football widow is that I’ve usually joined him in viewing the games. When we were renovating the house, years ago, EW would get a lot of plumbing, sheetrock, or wood work accomplished and still have time to watch a game or two each week. He’s a Bills fan. He puts the fan in fanatic. He’s a die-hard, I’m-from-Western-New-York-where-they-have- Beef-on-Wick-and-real-Buffalo-Wings Bills Fan.

We opted not to have a TV on board, even when we lived at the dock in Maine and had Time Warner Cable on the boat. EW purchased an antenna designed to provide local TV to his laptop and would watch the games on board. If that didn’t work, we’d head to a sports bar for the Bills game, and the play-offs, and the Super Bowl.

We left Maine during football season and EW declared, “I’m not going to watch football much, now that we’re cruising.” 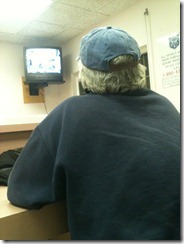 He didn’t have much opportunity on our way south from Maine to Florida, but did get to enjoy some games while we were in Jacksonville. When we were on the dock in Fort Lauderdale, the marina had a TV in the laundry room. At my suggestion, EW and another cruiser set up lawn chairs and we all watched a game or two. The security guards took their breaks in the laundry room and were tickled to see us – or maybe they were just tickled they could enjoy the game on their breaks. 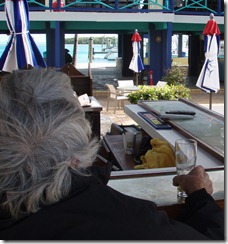 In Bimini, the resort and marina next door had a tiki sports bar with 3 TV’s, so we wandered over there the day after Christmas for the Bills game. A family who was staying at the resort had dibs on the audio for the Giants game, so the bartender very nicely gave us the TV with subtitles. It was windy, and not terribly warm, but EW enjoyed having a beer and watching football on the pool deck, almost as much as he enjoyed having sailed to the Bahamas.  Superbowl Sunday found us in Staniel Cay, where their bar had a food and drinks special for the evening, and we joined cruisers and resort guests for a rollicking good time. Afterward, EW said, "Well – I probably won’t watch much football next season."

Right. (You do realize that these “rights’ are “said sarcastic” with a Maine accent, don’t you?)

Here we are, anchored in Grenada, surrounded by cruisers from Australia, England, South Africa, France, Germany and the US. We are a 20 minute bus ride to any of the harbors and waterfront bars, and those bars cater to cruisers. On any given Cruisers Net we will learn where to watch Rugby, Football, Cricket, the US Open, and American Football. Near the marina is a small bar with a big screen TV and one of Rosa’s regulars convinced her to offer the Giants/Redskins game this week. We drank beer, ate barbequed wings and fries, chatted with our cruising friends and met new friends. Once again, EW was bitten by the football bug.

On Monday morning, we found out that Rosa had agreed to stay open for Monday Night Football, when the Patriots were playing Miami. “It’s a divisional game,” said EW. Evidently that’s important. We took an historical tour around Grenada on Monday, stopping for groceries on the way home. At the store we ran into four medical students who live in apartments close to another bar in the harbor. “They’re going to show the game outside tonight on a projector.” EW still planned to head to Rosa’s, but weather happened.

Just as we were walking down the driveway to da Big Fish, where our dinghy was tied, the heavens opened. It poured. For over an hour we had a rain storm such as I’ve not seen in months. We wisely stayed in the bar with our friends and waited. Near the end of the storm, one of the cruisers arrived from Rosa’s place and told us that she had a small flood going on. No football there.  But, thanks to the med students,  EW knew where to find the game. We had planned that after the storm, Bob would dinghy in to meet EW and I’d take our dinghy and groceries home. Instead, EW pumped the dinghy, took me to the boat, and picked up Bob from his boat. At nine-thirty, they headed in to join the college guys at the Tiki Bar, for beer, French fries, and the divisional game.

Even in paradise,football happens. Go Bills.

NOTE: A very bad thing has happened. Our camera isn’t working. We hope it’s the battery and will have a new one next week. In the meantime, no photos from me, I’ll have to rely on the kindness of others.