We’ve experienced boat –breakage since we left Maine ten months ago. This falls into the category of “Another Project” – those part failures that occur unexpectedly. EW had to tackle a major repair a few days after we arrived in Grenada.  Fortunately, La Luna has had excellent timing and we have been able to say, “Thank goodness it happened here,” with each unexpected break. The windlass is no exception.

We had anchored in tiny Calvigny Harbor for a couple of days of quiet with the crews from Sanctuary and FoxSea, and then hauled anchor to head to Prickly Bay, When FoxSea ran aground on a nasty reef, we had to drop the hook nearby because we’d overheated the engine trying to pull them to safety. The anchor went down and the anchor came up – no problems. We followed FoxSea into Prickly Bay and anchored near them to provide any support we could, and the windlass died.

Prickly Bay can be rolly, on occasion and it was quite uncomfortable the first couple of days, so EW prepared a bridle that would pull La Luna’s bow into the swells. Once the bridle was in place, he had to raise a bit of the anchor chain in order to attach the hook 30 from the bow roller. The windlass wouldn’t work. EW went below, looked into the anchor locker, and saw an electric cable hanging, unattached. The battery terminal lug that had been pressed on to the cable had pulled out, leaving the cable end dangling.  He was surprised, but believed that he hadn’t made the cable properly, so set about to re-attach both ends of the cable and lock it to the electrical post.

Back on deck, the windlass didn’t work again.

Back down below, another cable had pulled. Um, there’s no nice way to say this. EW was treating the symptom and at that point didn’t look beyond for the disease, which tuned out to be terminal. Once he’d attached the second new cable, he went back on deck. “Bubs! Go look in the anchor locker and see what happens when I press the button.”

Not being a fan of electricity, I didn’t stick my head in the locker, but could clearly see the cable pull away from the connector. Once EW stopped pressing the button, I stuck my head in the locker and looked up at the windlass motor. Wow. This wonderful, strong, 26 year old windlass had disintegrated around the perimeter about one inch below the bolts. There was a 1 inch gap nearly almost the way around the casing. Every time EW tried to start the windlass the unit moved so violently that it pulled out the electric cables. The windlass was dead.

Unfortunately, I didn’t get a photo of the one inch gap and a windlass motor barely hanging on. Here is a photo after EW had dropped the motor and gear box into the chain locker. I made him hold it up so you could see the destruction. 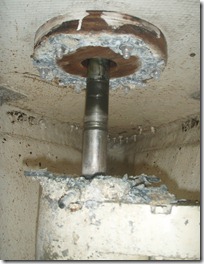 We were well-anchored in a good harbor (as long as no tropical storm approached) with a Budget Marine store just a dinghy ride away. Thank goodness it happened here, but now we had to purchase and install a new windlass.

We went ashore to Budget Marine to see what, if anything, was in stock in Grenada and how much it would cost. On the shelf, they had a Tigres horizontal windlass by Lofrans.  I began to learn about vertical and horizontal windlasses. Our old windlass was vertical. The motor and gear case were below deck with a vertical shaft through the deck to the winch part of the windlass. This type of windlass takes up less room on deck and more room in the anchor locker. They are harder to install and service, but out of the elements. Even so, enough salt water dripped on it over the years to cause the failure. Out came the marine catalogues, and up went the Wirie Wi-Fi antenna.

Lofrans has a good website, but it didn’t provide all of the information we needed.  Safety-Marine in the UK had an accurate foot print of the Lofrans Tigres and Imtra Marine had a good description of the Lofrans, and a lot of different sites have charts to help boaters choose the right windlass. In some ways the Tigres might possibly be considered undersized  and frankly I obsessed over that. Big time. The next size in a Lofrans is the Falkon and that would definitely be overkill. Big time. Still, we almost ordered a Falkon, which would have been a big time mistake – and a huge unnecessary expense..

We were protected from ourselves largely by our fellow cruisers – new friends and strangers – who listened to me obsess and who allowed me on their boats to view their windlasses and take measurements. While EW was almost as focused as I about choosing the perfect windlass, he was more concerned with getting a windlass and getting it installed, quickly. It would have been possible to raise the anchor by hand, with help from a halyard and winch, but it would not have been fun. If a named storm had turned our way, we were looking at raising the anchor, heading to a safe harbor and the potential of setting and raising the anchor at least one or two additional times prior to getting a windlass installed. EW wanted a windlass and he wanted it now.

There seem to be two ways to figure optimal windlass size. In each you add the weight of your chain or chain and rope, and anchor (in our case two anchors) and multiply that number times either 3 or 4. In our case, that number is either 1417.5 pounds or 1890 pounds.This total is amount of pull needed if we drag over a shelf and the chain and anchors were hanging in the water. Obviously, that is a (hopefully) rare occurrence. When we haul anchor, we drive the boat slowly along the length of the chain and most of the weight remains on the bottom.  We currently are comfortable with 225 feet of chain, but when we go to the Pacific we’ll need more, adding more weight, and that is one of the things that got us thinking about a larger windlass. Also, many of the charts showed the Tigres to fit boats up to 40-45 feet. Some suggest it would work on boats up to 48 feet. At 47 feet we are close to the edge.

EW would have ordered the larger and much more expensive windlass – with my total agreement – if it hadn’t been Carnival Week. When he dinghied in to Budget Marine on Saturday afternoon, he found that they had closed 20 minutes early. This was one of those moments where we were saved from ourselves. All during Carnival I made a pest of myself on the Grenada VHF net and with any cruisers who couldn’t avoid me.  The folks from Kookaburra invited me aboard to see their Tigres windlass and clearly thought the Falkon would be too big for us. I listened and took note, as I did when others gently questioned our choice. Ultimately, I spoke with Steve and Alice from Ocean Star. When I stated, “We’ve decided on the Falkon.” Alice gave a quizzical smile and raised her eyebrows just a tad, “Really?” I listed our reasons, and frankly, I don’t think she felt she knew me well enough to say, “Are you crazy?” but I got the message. I’m good at reading non-verbal clues.

Back aboard La Luna, I said to EW, “I think we need to re-think this Falkon model. I’m getting a lot of surprised looks from other cruisers.” He agreed and we went back to the calculator, Internet, and measuring tape.  If we added 200 feet of chain and multiplied that figure by 4, we’d be at 3930 pounds; times 3 we’d be at 2947.5 pounds. That’s a bit over the maximum pull of the Tigres, but the Falkon has a maximum pull of 3520 pounds. Sailors who travel to the extreme Latitudes and anchor in 100 feet of water near ice floes need that kind of security. We do not. What were we thinking? When the store re-opened on Wednesday, we purchased the Tigres off the shelf and EW prepared to install it. 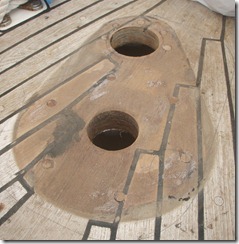 The challenge in the installation is that only one of the holes through the deck could be re-used for the new windlass. We had to cut a new hole, fill old ones, and make and attach a new backing plate and level mount. He worked for a day to find the right hole saw, but without a drill press it is very difficult to cut 2.5 inch teak into perfectly “straight” holes. 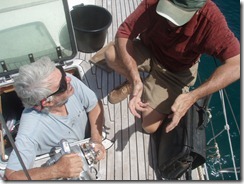 I opened up our cruising guide by Chris Doyle and found Jim Cottle – a Rhode Island raised, Maine taught marine carpenter. He came here nearly 20 years ago and now  runs Cottle Boat Works. In addition to being a very good marine carpenter, he’s a nice guy, and he and EW know a lot of the same folks from Down East. Jim visited La Luna, planned the project and returned to test his cuts. He filled the large holes, and installed a purple heart plywood backing plate and a teak mount. 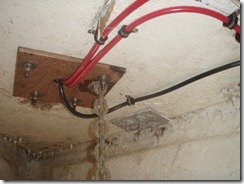 EW made the new wires and filled the screw and bolt holes. Six days after he’d purchased the new windlass, we raised the anchor for a test.  Here’s a photo of the anchor locker with a fully installed windlass. Now, the chain drop is farther aft and into the deepest part of the locker. There’s no large motor to knock my head against when I clean the anchor locker. That’s a good thing. 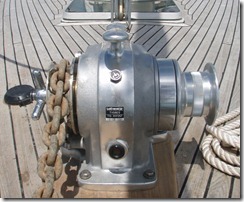 This is a good windlass. Yesterday a thunderstorm rolled through with wind from the north. We were uncomfortably close to a green channel marker, so we raised the anchor and moved to a new location across the bay. It was ‘one of those” anchoring jobs in that we landed a bit too close to other boats twice and had to raise the anchor and re-set it. Still, EW came back to the cockpit sporting a grin.  “I love this windlass!”  Good, because we’re sticking with this one for the next 26 years at least. 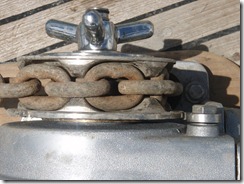 NOTE 1: Throughout the process folks kept asking us about the gypsy size. Evidently a typical mistake boaters make is to purchase a windlass without making sure it will fit their anchor chain. EW checked that first, second, and last. I knew we’d have the right gypsy. We just had to make sure it was attached to the correct windlass. 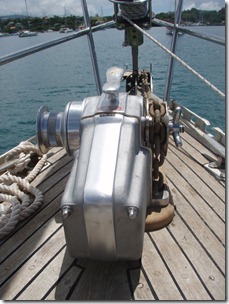 NOTE 2: EW has requested that I create a windlass cover to protect his new baby from the elements. It’s almost done.

FINAL NOTE: Ocean Star recently re-located to this harbor. When I saw Alice I thanked her for the raised eyebrows and told her we’d purchased the smaller model. We’re friends, now (she’s a lover of large dogs, also currently dog-less) and the next time I go crazy I’m sure she’ll bluntly ask, “What are you thinking? and set me straight. I’m meeting and making a lot of boating friends like that. It’s a good thing.

Nice blog! And very well explained about how to repair Boat. This blog is really worth reading for those who have passion for boating.

That is amazing post. I was also searching for this at that time . Could have save my time before . :( feel little bit unlucky