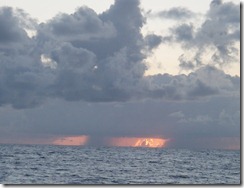 Forty years ago, I attended music camp in Farmington Maine, where one of the adult counselors spoke to the girls during orientation. We thought she was old, (she was at least 40!) old fashioned, and fussy, and we didn’t take her seriously. Music Camp was held on the campus of a small state university which was situated right in the town of Farmington, so those who were responsible for a few hundred 14 – 18 year old teens must have lost a lot of sleep at night. This woman was trying to impress on us that some of the boys we might meet in town may not be the kind of boy you’d want to introduce to your grandmother. Her phrase was, “There are town boys ---- and there are Town. Boys..” Try it. Say “There are town boys” with a lift at the end in a June Cleaver, welcome to dinner, manner. Now say, “And There. Are.Town. Boys,” in the same manner as you would say, “And there are Werewolves.”  Repeating this phrase to each other could send us into a fit of giggles at any moment. 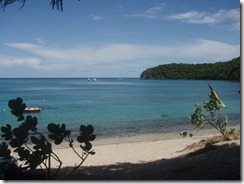 We who’ve sailed to the Eastern Caribbean and are taking one or more years to explore these waters don’t often (ever?) socialize with the Bare-Boaters – those folks who fly to weather and charter a boat for a week or two. Some of us may have been Bare-Boaters in the past as it’s a great way to try out cruising, but our agendas are different.

The result: we rarely meet and get to know the Bare-Boaters (called “Squigglies” by some Cruisers in reference to the Moorings Logo).

The other day, EW and I met three Bare-Boater couples the evening before their last day at sea. I so wish we’d had time to invite them over for drinks or meet up with them on shore. I chatted with them the next morning when I stopped by in the dinghy while running errands. (This is the cruisers’ version of a Maine “Dooryard Call”, where you drop by for a chat but stay in the driveway. Cruisers stop by for a quick visit and stay in the dinghy.)

These folks are the finest of Bare-Boaters. They are experienced sailors and one couple are both licensed Captains. They all sail in San Francisco Bay, so they’re used to rocks, mud, fog, squirrely winds and huge ships. They’ve chartered in Greece, Turkey, and throughout the Caribbean..

They are African American and readily discuss what it’s like to be among the few. Evidently at least one Grenadian was excited to meet his first African American sailors. I was simply delighted to meet and chat with six charming and experienced  fellow-sailors. That’s one of the reasons we’re out here.

Bon-voyage D., B., E., W., J., and C! Have a safe flight home. Give us a call the next time you’re in the neighborhood. We’d love to have you over. You are Bare-Boaters of the finest kind.

LOL Barb! My honeymoon was a bareboat charter with the Moorings. But I confess, at our young age (and so early in love) true bareboating would have been a disaster! We were fortunate enough to sail with two other couples AND we had a Captain and a Cook. TRULY the best boat food I have ever eaten! Attitute adjustment hour every evening with a different tropical libation - we had a great time! I believe that that experience allowed me to bring a young Mrs. Laurence to Maine not so many years later with quite a bit of sailing experience. We were fortunate to be sailing a brand new Jeaneau (sp?) 50' monohull during our charter. My question to you is... Is there a perceived or actual difference in "Bare Boaters" if they sailing a monohull or a cat?

Sounds like a wonderful honeymoon -- We see no difference between mono-hull Bare-Boaters and catamaran Bare-boaters. Sorry. There is a huge difference between Bare-Boaters and Crewed Charters. We have a lot of respect for the Captain and Chef/Crew on those. They know what their doing and the chefs cook way better than I do. Our friends on Magic Inspiration are chartering this year. You can find them and book (or dream) at www.viewyacht.com/magicinspiration