Sorry. Blame it on the Windward Islands

We’ve been out of touch for a bit, and now folks who watch these things know that a potential hurricane is brewing south west of us. I’m sorry if you’ve been worried. We are watching the weather and listening to the reports and talking with our boating neighbors.

Let me tell you about our “neighborhood”. Now that it’s summer in the Caribbean and we are below 13 degrees 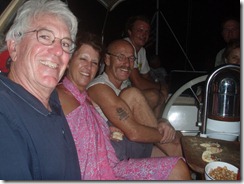 North, our boating neighbors fall into two categories: Bareboaters and Cruisers. As snobby as this sounds, the two groups rarely interact. Oh, we’re nice to each other. In the grocery store at Rodney, Bay, we had a lovely chat with some young men who had rented a catamaran for a week. They were stocking up on the essentials, beer, soda and sea sickness tablets – and lots of meat. Nice guys. We hope they had a good time. The other day, EW and friends tried their darnedest to  reach a bareboat before it banged onto a small reef here. They didn’t have their radio on,  and paid no attention to the yelling, gesturing cruisers so they banged the cat onto the reef and backed off. Now we know why that reef is known as “Bareboat Alley”. Really. But bareboaters are here for a week or two in good weather, sailing boats that aren’t theirs. They may have been cruisers or they may become cruisers. Right now they have their own agendas. 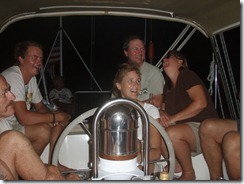 We are cruisers and have “joined” this group of like-minded folk on sloops, cutters, and cats who have all made 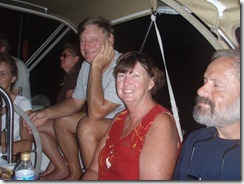 their way here from South Africa, California, New Zealand, Florida, France, Maine (three boats!), Germany, Nebraska (not sure how they did that), England, Rhode Island, and many other U.S. States. We are all neighbors and form friendships, share ideas and recipes, and keep track of each other. Most mornings, EW and I check into the Coconut Telegraph, a scheduled opportunity to let your neighbors know where you are anchored, when you are underway, and where you are headed. If we were missing from the net for a few days, folks would wonder about us, and contact us on the radio. We are not totally out of touch. And we have parties. These first photos are from an impromptu cocktail party aboard La Luna – attended by 12 or 14 people.

But we have been missing from the Internet for a few days (A week? Two?) and I know folks are wondering about us.  Here’s a brief recap

In addition to the racing, we’ve been very busy here yoga, auction, taking a bus to town and attending the Carriacou Regatta – great photos of classic boats and their classic beach start.

We’d planned to take a mooring at Sandy Island before leaving as we hear they have great snorkeling, but the weather news was iffy so we decided to leave Carriacou on Monday. Emily was no longer a threat (actually she wasn’t even Emily at that point) but there is another Tropical Wave forming and Monday was a calm day for moving, so we hauled anchor at 8:00 AM and headed south with S/V FoxSea and S/V Sanctuary.

Since there is potential for squalls with south winds at 30 knots, we opted to follow Sanctuary into Calvingy Harbor, a very protected (two reefs, narrow entrance) harbor on Grenada’s south shore. We’ll stay here for a couple of days before moving to Prickley Bay.

EW and I have priorities for the next few months – boat projects, writing projects, euchre, dominoes, volunteering, cruising kitty projects, fun, and self improvement. I’ll finish all the partially done blog posts and share stories and photos. For the next few days we’re going to learn the area, make some plans, and figure out what Carnival activities we will join. So many things to do, so little time.

So, I’m sorry that you haven’t heard from me. Know that we are happy and safe and keeping an eye on the direction and intensity of any potential storm. We’ll have plenty of time to head to safer waters if we need to. We are far from our families and many close friends – but we are among friends here and we all watch out for each other. We are not alone. We are not at sea. We are not totally out of touch, even though it may seem like it.

And we’re having a great time.

Hi guys it's aim from crows nest. So so nice to see your blog and hear that you guys are well

So much to say but I will save it for an email.

Hi B & e W, Glad to hear from you!!!! We have faith that u 2 amazing relatives and friends have things under control! Love u.
We are having a ball too. Just in the process of moving to a new home in Turner!!! Going on acruise to Alaska, think we told yiou about that.
Did we tell u that Connie's dad and Ken's mom passed away? also Barbara Benson. So hard to lose loved ones; its scary to realize WE are the older generation now eNJOYING LIFE TO THE FULLEST! The area is just beautiful,enjoy,enjoy!!!

Hi Folks,
A friend is approaching Grenada and is wondering whether he can enter Prcklybay at night with a 13m sailing boat ?
thanks
Hugo

So cute! I already like you on FB and also get your posts on Google Reader. :)