It Takes a Village–or - Networking in Paradise

Back in Maine, I was an active “networker”. I attended Chamber events and even held seminars to teach new members how to get the most out of networking breakfasts and after hour meetings. I Tweeted, helped folks make connections, and gathered and imparted information. When my girlfriend’s parents wanted an accordion player for their anniversary, I knew just who to call – and we found one who knew the Maine Stein Song. (I am that good.)

That’s nothing compared to networking in Grenada during hurricane season. Folks don’t Tweet much down here as we aren’t sitting at a computer most days and our iPhones and Blackberries are stored away. We do have a Facebook page for Grenada Cruisers, and instead of business cards, we have boat cards with contact information that includes email addresses. Most of us have access to Wi-Fi at anchor or on the dock, some of us go into various restaurants or cafes to get on line, and we have the VHF Radio tuned to a designated harbor “working channel” through which we can all contact each other. Most of us keep our radios on 24/7.

The other day, I had errands to do in town and EW had to have the dinghy to ferry Jim Cottles to La Luna for the Windlass Project. Our hand held VHF awaits a new battery, so EW told me to have friends call him on the radio when I was ready to head back to the boat. Here’s how that went. I walked to FoxSea, (left) which is on the hard getting repaired after a hard grounding. It’s been hard on them, but they are coping well. (Sorry, this was hard to resist.)

Vicky got on the radio. “La Luna. La Luna. This is FoxSea.”

Nothing. Again, “La Luna La Luna. This is FoxSea.”

Still nothing. I figured EW was on the bow with Jim and couldn’t hear the radio, so I settled into FoxSea’s cockpit to wait it out. Again she tried. “La Luna. La Luna. This is FoxSea.”  Just as she finished the call, another boat came back. “FoxSea. FoxSea. This is Celebration.”

Vicky didn’t want to miss EW’s return call, and we both though Celebration was still at Port Louis, so she put them off with a “Celebration, can I call you right back?”

We waited for La Luna. Nothing. 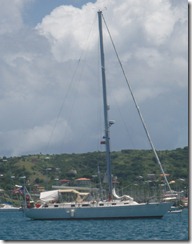 Then, “FoxSea. FoxSea. This is Puma.” Well, since we hadn’t just called EW and since we knew Puma was anchored off La Luna’s starboard bow, Vicky responded to Puma. “This is FoxSea. Pick a channel.”

They selected a clear channel for conversation and we found out that yes, indeed, Puma could see La Luna.  (Puma's view of La Luna is at right.) The generator was making noise on the stern, Jim was running a grinder on the bow and EW was crouched nearby. There was no way he would hear the radio. Puma offered to dinghy over and let EW know I’d been trying to reach him. We thanked them, and I climbed down the ladder to head back to the dock, reminding Vicky that she still had to call Celebration. She reached them as I reached the ground.  It turns out that Celebration had moved to the Prickly Bay anchorage and  were now near La Luna, so they’d been calling to relate the same information as Puma. EW picked me up – but it took three other boaters to make it happen. I like our village where everyone “pays it forward”.  (Celebration had a clear view of La Luna, too.) 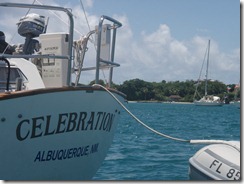 We were able to pay it back right away, as when I arrived at the dinghy dock, we met up with the First Mate from Aqua Viva. She’d just returned with groceries and laundry and had left a message on the Captain’s cell phone. Because she was sure he was on his way in she wouldn’t accept a ride with us, but. I told her that we’d check the location of their dinghy and confirm that he’d gotten her message. We met no other dinghies on the way to La Luna so we turned to port and headed for Aqua Viva. The Captain was below and the dinghy was tied astern. We let him know that he had crew and provisions awaiting his arrival.

I loved the symmetry of this. Networking is much simpler out here, but the basic premise is still the way I described it in my seminar: Givers’ Get. It all works when we simply strive to help each other.

By the way to those of you still attending Chamber events, always wear your name tag, high on your right shoulder. It’s been a long time since I’ve had occasion to provide that tip.

Have come to love your posts. You're now RSS on my home page.

Yes, you are that good. My Dad and Mom LOVED the accordion player and had a great time singing the "Stein Song".Glad your networking skills are still in use in Grenada.
Love you!
Kathy

Thank you, George! Glad you are enjoying my stories.