Hash– The Grenada Hash House Harriers, That Is 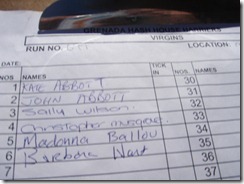 Yesterday, I was a Virgin and now I’m not. I have the certificate to prove it.

Here, I have signed in for the Hash as a Virgin – yeah, insert joke here.  About three hours later, I was no longer a virgin (again) and received this certificate to prove it. (I never got a certificate for that the first time.)

For those of you who are uninitiated, a Hash is essentially an event for runners with a drinking problem or drinkers with a running problem. Beer is consumed at the end of the Hash, but this is more of a social and family event than the organization’s own jokes and customs would indicate.

In Grenada, there is a very active chapter of Hash House Harriers, and an equally active group of cruisers who join them every week.

The best thing about participating in the Grenada Hash is that it’s the first event we’ve found that interests and attracts folk from every group on the island including: local youth, retirees, families, medical and veterinary school students, and cruisers.

The worst thing about participating in the Grenada Hash is that you are moving quickly (some run) up and down steep hills, through brooks and rivers, getting muddy and cut by razor grass. Does that sound like fun to you?

After the 6 hour trek to Concord Falls, our hashing/boating friends all said, “If you can handle that trek, you can handle a hash. Those only last two hours.” Since my dear friend Dora wanted to Hash and her sweetie and EW were still under the weather with colds, I agreed to participate with her.

I was going to provide for you the official description of this event – but you wouldn’t believe it if I told you. It started in 1938 in Kuala Lumpur … and there’s some mention of Hares and Hounds, as if normal people knew what that was. Just think Mad Dogs and Englishmen and you’ll get the general feel of the event. There’s an element of a race – but that isn’t important. In a very minor way it is similar to a road rally, but not really. It is not a walk in the park. I would not participate where there are poisonous snakes. (Since I won’t do much where there are poisonous snakes, this should come as no surprise.)

Confused yet? If you really want to know, go to their website (linked above and read their Bible. (Not kidding about that, either. You can’t make this stuff up.)

Maybe I should just tell you what I experienced.

One of the cruisers is an avid Hasher (She has two Hash Names) and she reserves busses for cruisers. Yesterday we filled three of them. At the chosen site, which is different for every hash, folks arrive by car, bike, and a bus from the university. All ages attend. We all sign in so they have an accurate count and know for whom to look if they don’t arrive back to the starting point in a timely fashion. (This is serious. When we first arrived in Grenada there was an entry on the cruisers’ Facebook page by a woman who was thanking everyone for finding her husband. He took a wrong turn on his first hash and wasn’t found until 2:00 AM! His Hash name is now “Brain-dead”. Hashing is not for sissies.) 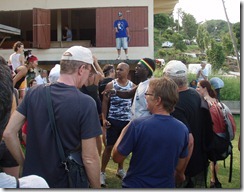 So, then the leader of the Hash Chapter stands on a high point and talks and is largely ignored by everybody. (Yes, that is a cemetery in the background and yes, he did refer to it, as in we could end up there if we weren’t careful.) Before we start off, he calls all the virgins forward for instruction, because no one else will pay attention. I am so not kidding. Here are the instructions as I remember them:

1. You are on your own.  However friends and families stick together. Some amble and talk – not too slowly as the event doesn’t start until 4 and one prefers to finish before dark. (Did I tell you Dora told me to bring a headlamp? Yes! A headlamp! What kind of walk was this?)

2. You find the trail by following “piles of paper”. I had no idea what that meant until I saw a pile of paper. 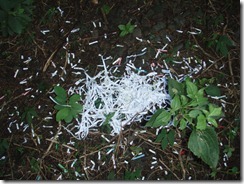 3-A.  At two points on the trail there will be a large circle of paper, denoting a deception. You will have numerous options for the trail, and if you are in front, or so far behind that you don’t see anyone ahead of you, you will simply have to try each possible trail. Count the piles of paper and if you reach 10, you are on the right trail. If you get to a large black X made of paper, you are on the wrong trail and have to go back. (Still not kidding.)

3-B. Whenever you are confused/concerned about the trail you are on and if there are folks ahead of you, you may shout,          “ R. U?” down the trail. If it is the right trail, folks ahead of you will answer “On! On!” If it is the wrong trail and they are heading back, they will shout “On back!” and you can try another trail. They aren’t supposed to lie, so you can trust them.

4. This trail starts “over there” (the far corner of the field at yesterday’s location).There is a “runners’ trail” and a “walkers’ trail”. I think these are only  separated near the start so the walkers aren’t run over or to separate the hares from the hounds or whatever, but I was in the back and never saw the runners or the two trails. There is no starting gun – once the leader has instructed the virgins, he simply points us all in the direction of the first pile of paper and everyone heads for it at their own pace. This particular Hash was very slow at the start and folks were bunched together for quite a way into the trail. 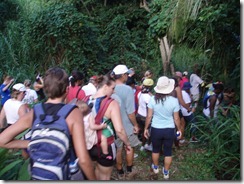 Except for the miles-long vertical climb through a young forest, this was a fairly easy walk. (I may have exaggerated the “miles-long” part.)  There is no photo of the vertical climb through the forest because I needed two hands to keep myself moving forward, or at least from not falling back down. (Again, not kidding.) I was assured by many that it was the easiest they had ever experienced; some of it was even on paved roadways, and past bucolic scenes. 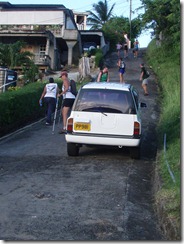 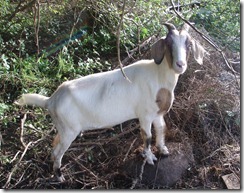 This is a bucolic scene for a Hash. 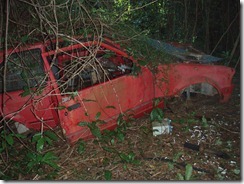 Even so, I remained near the rear of the pack. I’m OK with that, but was chagrinned to be passed (twice) by two women each of whom carried a baby. I am so not kidding. One woman had a very young toddler in a backpack. She (the mom) was a serious Hasher. They were ahead of us on much of the first part of the trail, but took a wrong turn at a circle so we were in the lead. Dora and I were congratulating ourselves that we would “at least beat the mom with the kid on her back” when said mom ran past us, baby bouncing. Shortly afterward a cruising mom, carrying her nine month old son in one of those fabric slings bounded past us at a brook crossing. Hashing is hard on the ego. 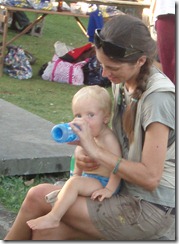 At the end, one can purchase beer. (What is Carib? It’s why we Hash!” – We had to chant that prior to starting. Carib is one of the local beers.) The baby is drinking water. This is the nine month old and the mom who carried him. Hashing is brutal on the ego. Folks also sold ice cream and a boil down – but we didn’t find the boil down before the food ran out. At the end of the event the virgins get their certificates for which they have to pass through a gauntlet of sprayed beer. (Still not kidding.) Also – don’t ever wear new shoes to a hash. Just don’t. And don’t say I didn’t warn you.

It was fun. Sign me up for next week. EW’s going to attend as well, and we each have a headlamp. (Still not kidding.)

Love this post, Barb. Looks like a hoot. You know, these didn't inspire quite so much jealousy when Lisa and I were on the road too. They do now!

Thank you, David! I'm in awe of you -- stepping out for an adventure like that and now on to follow your career dreams. Very well played. You'll have many adventures down the road. Cheers! Oh - and we are both going to hash tomorrow. Wish EW had some new shoes he could wear.