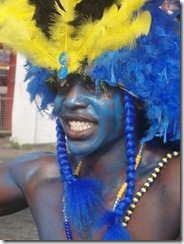 I must be getting older because I don’t bounce back from a night of dancing in the Monday Mas like I used to.

I’ve never before danced in the Monday Mas so age has nothing to do with it – though this is clearly an event for the young adults and such tourists and cruisers who are foolish adventurous enough to participate.

We arrived in Grenada in time for Carnival, and had to decide which events we wanted to see.

Here’s what Wikipedia says about Caribbean Carnivals in general:

Caribbean Carnival is the term used for a number of events that take place in many of the Caribbean islands annually.

The Caribbean's Carnivals all have several common themes all originating from Trinidad and Tobago Carnival, based on folklore, culture, religion,and tradition, not on amusement rides. Carnival tradition is based on a number of disciplines including: "Playing Mas"/Masquerade; Calypso Music and crowning a Calypso King or Monarch; Panorama (Steel Band Competition);Jouvert morning; and a number of other traditions.

Since we have no windlass, right now, we aren’t raising the anchor for anything less than a hurricane – so our participation had to be weighed against the bus ride to St. George and the times of the events. I had hoped to see/hear live music, but we missed out on that and will have to seek a steel band performance somewhere on the island.

Many of our cruising friends had decided to participate in the Monday Night Mas and we opted to join them. This is not a parade – though locals and tourist line the road to watch the groups dance by. The Mas is made up of a number of large trucks sponsored by various local companies – most of which make and/or distribute booze. One purchases a Mas Package from their chosen poison, dons the gear and shows up at the appointed hour.

And waits. Because the appointed hour in the Caribbean is never the hour stated in all of the material. Once things get rolling we follow the truck, fill our mugs/glasses with their beverage, and dance. 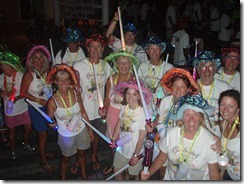 The Monday Night Mas which “began” at 7:30 PM and continues through the wee hours of Tuesday morning.

About 50 cruisers elected to join the Carib Beer truck for the Mas and we all paid our $70.00 EW EC per person ($26.21 US). Late last week I walked to the Carib Brewery where they had a room with four clerks selling Mas packages. We each got a hat, beer mug, and wand – all with little battery packs to power the lights – and a t-shirt (or lady’s tank top) and beads that had to be placed in the sun so they’d glow in the dark that night.

Many cruisers had opted for the “Carnival” deal at the marina in St. George, and we took a bus over to meet with the crews of Windrifter, Sanctuary, Magic Inspiration, Iolea, Celebration, FoxSea and the others. One savvy cruiser had negotiated with a local taxi driver to provide vans to take all of us to the gathering point. Most of us had never participated in the Monday Night Mas – an event we suggest every cruiser try once. I think most do it once and move on to other things in subsequent years. Monday Night Mas is a lot of work and a lot of fun. 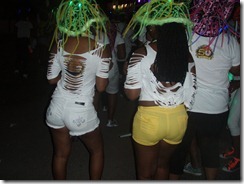 First we hung around as 300-500 people gathered -- all wearing the required hats and t-shirts. Some of the local women had modified their shirts so they looked stunning and sexy in a t-shirt while we cruisers looked like (mostly) middle-aged cruisers in bad hats. 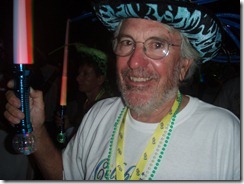 Carnival is not an artificial event designed to get tourists to come to the island. It is a local celebration/holiday and tourists are encouraged to watch and to participate. Throughout the week locals on the street have welcomed us to Grenada and invited us to enjoy Carnival with them. Men unloading hops at the brewery stopped to greet me and express their pleasure that we would be joining them at the Monday Night Mas. Some cruisers had wondered whether we had been encouraged to join a truck that was “reserved” for visitors, but that wasn’t the case at all. We were definitely in the minority and we were most definitely welcomed. It was great fun. 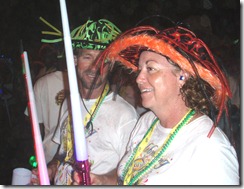 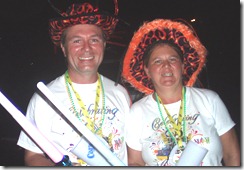 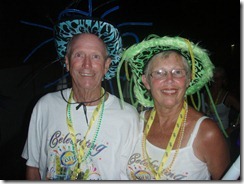 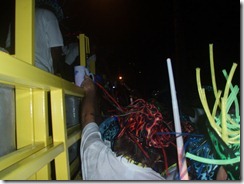 In addition to the large tractor trailer with the DJ on board, Carib had a smaller truck that served the beer. We dancers would break ranks, make our way back through the crowd and hold up our mugs to men with kegs on top of a truck. We are amazed that no one got trampled and no feet were run over by the wheel. Getting a beer was an experience not to be missed.  I know, I successfully obtain beer three times. There was spillage, but no carnage.

Ahead of the Carib Crowd, the DJ on the music truck would exhort us to wave our wands “To de left! To de right! Left! Right!” 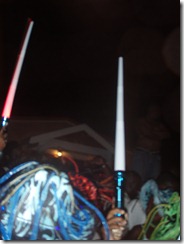 with a particular song. They played only a few songs, repeating them through the night, and the locals knew the words and sang along. And danced. And my how they danced. Frankly “Shake your booty” has a whole knew meaning for me.  Let’s just say that the man stands (closely) behind the woman who bends slightly and shakes. They both shake, as they continue to move forward, rhythmically, in tandem. I assume you get the picture. Others danced alone, but when the music was playing everyone danced.

Walking takes a certain set of muscles. Dancing as you move down the street uses a whole different set – even if you aren’t shaking your booty. (Or aren’t shaking it as rigorously as others were.) At one point around 10:00 PM, as Carrie and I were walking along (in step to the music, but definitely not dancing) a handsome young man came by, smiled and said,

“There is no walking in de Mas. There is only dancing in the Mas,” and he exhorted EW to make sure we continued to dance. Evidently he had caught us when EW had been dancing, as I think he danced a bit less than I did. From that point on, I danced. We all danced. We talked with the locals – many of whom congratulated us on joining them, welcomed us to Grenada, and included us in their celebration. One of the more distinguished looking cruisers was especially welcomed. At one point a young man offered him a joint. Later as our friend watched a couple dance as described above, the young man turned and said, “You like to try?” and offered the young lady for a dance.

Did our friend partake of either of these offered gifts? That’s for him to say. What would you have done?

The route probably only covers 3 – 5 miles, but the Mas moves very slowly. After midnight we had traveled only halfway and were back to the marina. It was amusing to see 30 white cruisers turn from De Mas en mass and head for the toilets. We hear that some hardy folk rejoined the party. EW opted to crash on Windrifter and Dora and I joined a few others in the marina pool before taking showers. When we arrived back at the boat, the boom boom boom of all the different trucks could be heard as the Mas danced around the bay toward the stadium. In spite of the noise, EW slumbered in the cockpit, dead to the world. I must say that when I joined him, I too, slept soundly until 4 or so when I was awakened for a moment by the silence. The Mas was over. Roosters were crowing. I rolled over and went back to sleep. 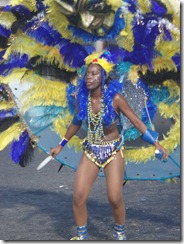 NOTE: The photo at the top and these two here were taken at a more family focused parade of tribes held Monday afternoon. As you can see, whole families participate. The children danced and danced well.

Great article...hope your rebound from Monday Mas and get your windlass!! Happy Sailing...Doll (& Capt'n too) palemoondove

Thank you. Glad you enjoyed it. EW is working on the wiring, we have Jim Cottles, woodworker, filling holes, drilling holes, and creating new backing plates, and I'm making the sunbrella cover to protect the new "baby". Lotta work in this new windlass.