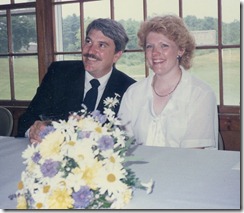 Twenty-six years ago today, EW and I were wed at Holy Cross Church in Portland Maine. I became a wife and a

step-mother, and had a lot to learn about filling both roles. We all had a lot to learn – and EW and I still work at it. Having been married and divorced when we met, EW at first flatly refused to discuss marriage, saying he was never getting married again. When he proposed, I was so surprised that I asked him if he were serious and threatened bodily harm if he “took it back”. Not the most romantic response, I know.

We both very quickly got used to the idea – in fact I picked out my dress the very next day! EW began to set limits, “I’m not sure that I can be married for life,” he said with a sly grin. “That’s fine”, I said, “but I want a 50th wedding anniversary. Can you handle 50 years?” He said that sounded OK; this morning he (predictably) mentioned that he only had “Twenty-four to go.”

We’ve had our ups and downs – still do, even on the boat – or perhaps especially on the boat – but we’re committed to being married for 50 years and I’ve taken an option on the next 50. Priorities and lessons change with each year, month or day; today I am sure of three things that will help us reach that Golden Anniversary: first, a sense of humor is vital (see above) second, we don’t have to agree, but we do have to forgive; third, sharing a dream and working to make it come true adds spice, excitement, and a reason to make things work.

Many years ago we both attended a course led by Ivan Brunell founder of International Personal Development. We learned a number of techniques that we try to put into practice, though both of us have had times when you’d never know it. Ivan said that if you still get angry about something that happened in the past, you haven’t forgiven the other party, no matter what you tell yourself and others. And you know something? Two smart, creative, strong people will never, ever agree about everything. Relationships create conflict and it’s how you manage that conflict that determines whether you move forward fully or not. That was brought home to me recently as EW and I “discussed” an old issue that was creating new conflict because I couldn’t let go, accept what is, and move on. I’m working on that. It’s my belief that the inability to truly “agree to disagree” and let it go destroys many marriages. I’ll not let it destroy ours.

We are living our dream and that is a wonderful thing to share. Though having a boat and sailing to distant ports was a dream EW brought to the relationship, he made it abundantly clear that he would be happier at sea if he could share that dream with me. Through the years this became our dream and we worked, plotted, read, asked questions, attended boat shows, and visualized our shared adventure at sea.

Last year, late in June, I was stunned when he expressed concern that he hadn’t thought of something exciting to do for our Twenty-fifth anniversary. I told him that he was taking me to sea in a few months – that was excitement enough! Now, one year later we’ve weathered squalls off Cape Fear, fixed the boat in beautiful harbors, met others who were living their dreams at sea, and traveled from Maine to St. Lucia. No life is perfect, no relationship sunny every day, but as I write this with rain beating down on the deck, I know that I wouldn’t want to be anywhere else, with anyone else. 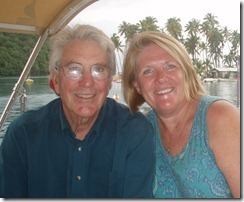 For me, this is perfection. I love you, EW. Thank you, for giving me at least 50 years of your life, all of your love, and making our dreams come true. 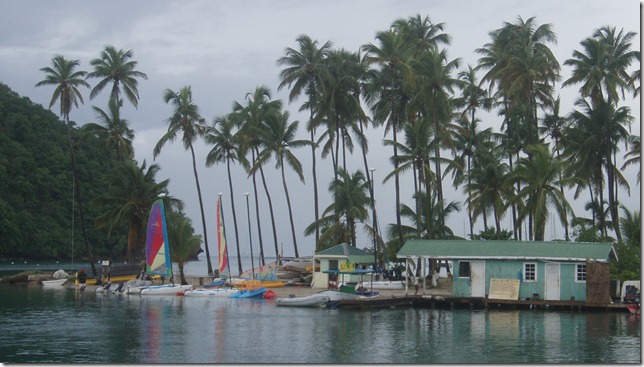 The view off our stern at Marigot Bay, St. Lucia. Not a bad place to spend a wedding anniversary.

Posted at 06:57 PM in Flashbacks and Stories from Home, Relationships at Sea | Permalink | Comments (10)

Great, great blog post! Happy Anniversary and many more. So glad you're both living your dream - and that we get to read about it.

Congratulations, Barb and EW! You've come a long way, literally and figuratively! The cruising life obviously agrees with you: You two look great!

Thanks, Holly. Glad you enjoy it.

A great testament to lasting love. Love and loyalty and lasting commitments are undervalued by many. Congratulations and thank you for sharing.

I remember that day very well. You and Stew were (and still are) radiant together!

Thank you! You helped make that day! Matron of Honor Extraordinaire!

I intend to "officiate" your 25th wedding anniversary -- and fully expect you two to reach 50, as well. Chrissy -- you always make me smile -- Thanks for the note. Love you bunches. Tell Gordon I love him, too.