There are Projects .. and There are “Another Project” Projects

When John and Dora sailed back into our lives (literally) we immediately got together to share stories. At one point John mentioned something that needed fixing and said, “Another project.” To understand the inflection, channel your inner Eeyore:

"Good morning, Pooh Bear," said Eeyore gloomily. "If it is a good morning," he said. "Which I doubt," said he.
"Why, what's the matter?"
"Nothing, Pooh Bear, nothing. We can't all, and some of us don't. That's all there is to it."
"Can't all what?" said Pooh, rubbing his nose.
"Gaiety. Song-and-dance. Here we go round the mulberry bush."

That kind of voice. “Another Project” is a boating phrase most often used by the Captain/Chief Engineer, and always refers to an unexpected and unwelcome project. John said the phrase  “Another Project” exactly  the same way that EW says “Another Project”. Do they both channel an inner Eeyore, or did John learn this from EW? I do believe I’ve heard other captains say the same thing .. the exact same way. Hmmm.

Here is an example of recent “Another Project” aboard La Luna. While still in Rodney Bay, I opened the freezer and was moving things around when I lost my grip on a bottle of beer. (We keep beer, soda, and water in the top of the freezer.) Said bottle of beer hit the fan that moves very cold air from freezer to fridge and broke it. Irreparably. “Honey,” I called, “I just did a bad thing.” When I told him what I’d done, he closed his eyes briefly and said, “Another Project”.

Ultimately, he had to go into town search for the right fan, return and install it. It didn’t take all that long, but he lost the time he was going to use on a  Project. A Project is one the captain has planned and looks forward to completing. For example, here in Marigot Bay yesterday, EW made a new anchor snubber and an anchor line for our storm anchor. 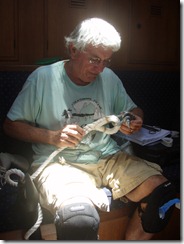 This is a happy EW, finishing the eye splice for the anchor line. I didn’t even know we needed these. He spent a few hours making them yesterday and today he is reorganizing the stern lazarette, getting rid of old rope and stowing new. He’s happy, happy, happy,completing projects and crossing them off his list.

Unlike the other day, back in Rodney Bay during the freezer fan incident, when the dinghy motor wouldn’t start.

The fan project and the dinghy motor project actually are related in a weird way. The fan broke I broke the fan on Sunday and the stores were closed, so I went around the anchorage in our dinghy asking whether any neighbors had a spare fan. None did, but the captain of Caribbean Reach was in his dinghy, working on his own “Another Project”. “How’s it going"?” I asked.

"Not good. Do you know where I can get one of these repaired tomorrow?”

On Monday morning, John and I were going in for Yoga, Dora wanted to get their laundry done, and EW had to go to the stores and search for a fan for our “Another Project”. We decided that Dora would drop off John and me, and EW would tow the folks from Caribbean Reach. EW helped Dora with the laundry, then they both headed to the shops to search for a fan. (Good news: they found the right fan at a good price. EW bought two and Dora bought one for John because she knew he’d want it. He did. I never would have thought to do that. Go figure.)

John and I mellowed out and got some exercise and waited for Dora to return for us. And waited. Then she called on their portable radios. “We’re at the marina dinghy dock and will be with you shortly. There’s a problem with one of the motors,” she said, adding sotto voice, “not ours”. “Oh,” I thought, “this isn’t good”. Sure enough,  we soon saw two dinghies tied together, heading our way. EW  was driving their dinghy, towing Dora in our dinghy. He looks at me and says .. wait for it ..  “Another Project.” (Have you got the inflection down? There is no exclamation point here, just a dejected Eeyore tone.) 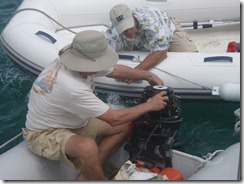 Back aboard La Luna EW quickly replaced the freezer fan and then moved on to the dinghy motor. A bit later, the crew from Caribbean Reach roared by, their dinghy motor repaired, and soon after that, the captain motored back to offer EW some help.

The motor wouldn’t start, so Tom gave EW the name and number of the small engine repair guy in Rodney Bay, I called him and made an appointment for 4:00 PM and Tom agreed to tow EW back to the marina at 4:00. 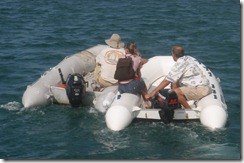 We help a boater with a project or “Another Project” and that boater or a different one help us. It all evens out in the end. This time. Tom provided the same service we had, on the same day. “Another Projects” are like that. Creepy.

We weren’t able to get the necessary part, but the Tohatsu will work. We just have to take the lid off, wrap the cord, and pull to start, then carefully clamp the lid back on. Here in tiny Marigot Bay we are rowing, and the Tohatsu has gone from “Another Project” to Project, as it is now something he can plan to fix when he finds the part.

Every cruiser knows that this lifestyle allows you to repair your boat in the beautiful ports of the world. It’s just a bit more fun/easier to do/less disruptive with we work on Projects and not unpleasantly surprised by “Another Projects”.

EW was gracious about the fan I broke and he hasn’t blamed me for the motor even though I was the last to drive it. Even so, I’m going to work very hard to make sure I don’t create another “Another Project” any time soon.

NOTE: I had Stew read this and learned the following:

WONDERFUL writing! But, it seems to me that the 1st mate is adding lots of projects to the captain's list. ;-) Very best to both of you.