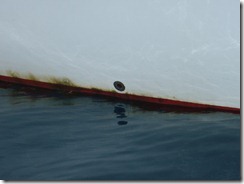 I had learned the proper technique of painting the boot stripe, white reveal and bottom paint during our last haul out in Maine. I wouldn’t say I’m adept at it, but I know what should be done – and even wrote about it. Just after we hauled out in Rodney Bay, we had dinner aboard S/V Sanctuary and EW said he had lost sleep the previous night trying to figure out how to raise the waterline the way he wanted to. “No problem,” I said. I think I can figure it out.

EW wanted to raise the waterline two and a half inches for only the stern and half way forward. He wanted to keep the old waterline at the bow. Still, I thought, “How hard could this be?" and the next morning I dove in with tape, write-on/wipe-off markers and a measuring tape -- and a bucket. I had neglected to get paper and pen off the boat and we had a broken bucket under the keel, so I used that for the math. Let’s see. If I have 20 feet to angle from 2.5 inches to 0, that’s 1.25 inches at 10 feet and .75 inches at 5 feet and 2 inches at 15 feet.

Makes sense, but drawing or taping a straight line on a boat is, shall we say challenging. Ever game, I tried it for the better part of a day, with the boat yard crew – particularly Elvis – asking a few questions about my intentions. The next morning I again tackled the job grew very, very frustrated, and stomped (if one can stomp up a 15 foot ladder) up to the cabin and the laptop. I Googled “How to raise the waterline sailboat” and learned these steps.

Well d’uh. There is no math involved in this process.

I stomped back down the ladder and walked up to EW and said, “If I raise the waterline two inches all around the boat, can you live with that?” He readily agreed, probably because my tone of voice may have implied that if he couldn’t live with it, we were going to have issues.

Since we have the red boot stripe with a one inch stripe of white between that and the bottom paint, I had to raise two lines, two inches each. I channeled the guys from Great Island Boatyard in Maine, Tom and Kevin, who had given me good (though unsolicited) advice about painting the stripes and the bottom during the last haul-out. So my method is as follows:

For peak efficiency, you need:

Kevin had told me that you could work with two rolls of tape at once, so I figured that if two is good, four is better, and three worked just fine. 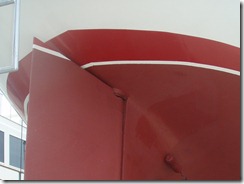 Each blue and red block of words indicates another circuit with the step ladder around our 47 foot boat – 13 times – and that doesn’t count the day I tried to raise the waterline 2.5 inches – partially. I got some isometric exercise that week. 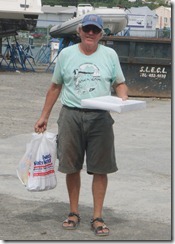 Throughout the week of the haul-out one or the other of us would have to walk to the shops for various parts or supplies. EW had been gone for a couple of hours one afternoon while I finished painting the boot stripe. I glanced up when he walked back into view, and saw that he was carrying a number of parcels. I turned back to the task at hand and then whipped my head back to look at EW. “Is that pizza?” “Yep, and it looks like a good one, too. The security guard gave me directions to this Italian place up the road.” “You are my hero.”

Just like back home, we had pizza and beer as a reward for a job well done.

As we were sitting on deck, I looked at the boat next to us. They were having a major job done and had sanded the whole hull, so no bottom line or stripes showed. “I can’t imagine how they make the lines on that boat,” I said. There’s nothing to go by. How can the possibly get a straight line?”

“Oh,” said EW, “they get a laser level thing and draw the line on. That’s what we should have done if we stuck with raising it 2.5 inches only part way around the boat.”

Now he tells me.

Once the keel was repaired, EW finished the bottom paint and we re-launched La Luna. As you can imagine, there were many comments about the two-toned bottom. Here’s how that came about. 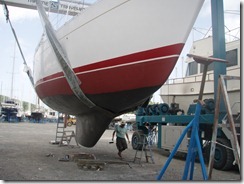 When we purchased La Luna, her bottom was that ubiquitous blue color you see on a lot of boats. I didn’t like it – particularly as her topsides are white, red, and gold. EW finally consented to paint the bottom red and we both loved it.

He purchased the bottom paint at West Marine in Puerto Rico and they didn’t have the paint he’s used in the past, Interlux Micron Extra with Biolux. Nor did they have any red bottom paint.  He decided to purchase West Marine’s PCA Gold Anti-Fouling Paint, about which we’ve heard good reports from others who sail these waters. Given the options of black and green, I sucked it up and agreed to a black bottom and he expected to get more black bottom paint when we hauled out. EW had a brainstorm in Rodney Bay, since we had to get more paint, why not get red paint and paint the top of the bottom red? That sounded good to me. EW purchased Interlux Micron 66 which is a slightly different red color than what we’d 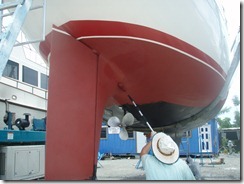 used in the past.  It isn’t our preferred color of red, but it works. EW was brilliant in that he painted the entire rudder red as a two-toned rudder would have look ridiculous. It looks fine. I’m happy. And if I’m happy, EW’s happy. Plus, he gets to conduct his own experiment – which paint will work better in these waters. We’ll let you know.

NOTE: Neither Interlux nor West Marine were apprised of this post and neither gave us a discount for publishing this. At some point, this site will accept advertising, but does not at the this time, July, 2011.